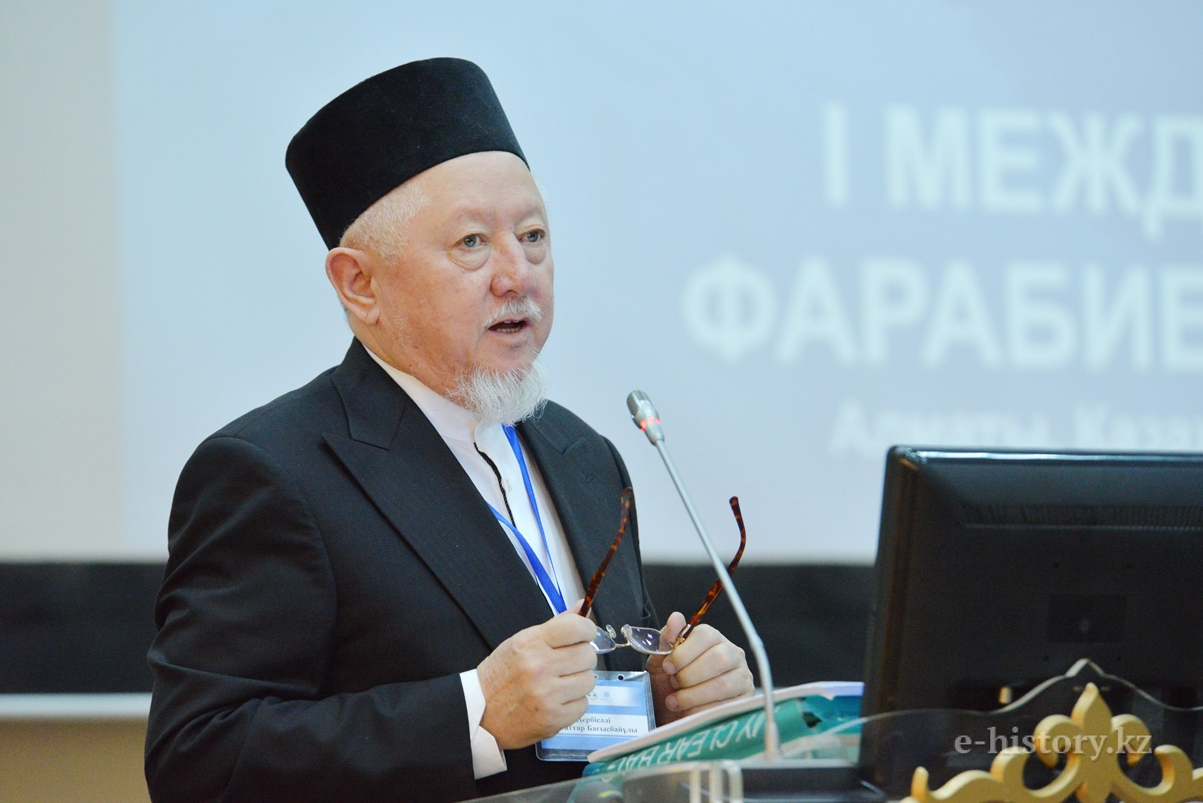 During the International Farabi reading, the journalist of web portal “History of Kazakhstan” was able to talk with former Supreme Mufti of Kazakhstan and Rector of the Institute of Oriental Studies named after R. Suleymenov Absattar Khoja Derbisali.

As professional orientalist, Arabist, how you can assess the heritage of al-Farabi?

"First of all, al-Farabi is not the only scientist who was from Otyrar. During the research I found out that there were more than thirty scientists from Otyrar. Among those scholars who lived in the 870-950, the first was al-Farabi. He was born after one - two centuries when Islam the spread. City Otyrar was named Farabi and scientists who came out of this town, appropriated the name “Farabi”. From the beginning of the 11th- 12th up until 16th centuries there was a lot of scientist from  Farabi.

During the research I found the work of a man name was Al-Farabi al Turkistan al Icani and translated his treatise from Arabic into the Kazakh language. On this topic I published my monograph. If in 60-80s of last decade seven or eight treatises of Abu Nasr al-Farabi were published within the program “people in the steam of history” from the libraries of Turkey we bought about 78 treatises. Up to this point, about 70 of his works were unknown”.

Can you provide these materials in electronic form for readers of “History of Kazakhstan?”

“Of course, come to the institute and we will continue to work together”.

About the origin and ethnicity of the great thinker is still a lot of controversy. Your colleagues, Uzbek scientists believe that al-Farabi was Uzbek. What is your opinion?

"Around the name of the great man always will be disputes. Once the Moscow Institute of Oriental Studies of the Academy of Science of USSR for many years was headed by Academician B. Gafurov ethnic Tajik. In70s, when they began to study the al-Farabi, the scientist works began to appear in the Uzbek and Tajik literature. The question concerning the origin of al-Farabi was closed by   B. Gafurov. To the "philosophical treatise" of Al-Farabi he wrote a following prefac: "Al-Farabi — the scholar of Turkish origin. He is a person from the city Otyrar South Kazakhstan.

What activities the Institute of Oriental Studies conducts by the program "Cultural Heritage" and "The people in the flow of history"?

A center of information was established at the Institute of Oriental Studies.

We study all the scientists with the name Farabi. Al-Farabi was the person that covered all areas of science. Therefore, the Kazakh National University was named after great scientist.

Materials on theme
“Talisman” of Ukrainians of Kazakhstan
Cultural walk: Zhambyl Zhabaev Memorial Literature Museum
Supreme Council – the beginning of parliamentarism in Kazakhstan
A unique exhibition devoted to the art of the Kazakh koshmodeli was opened in Astana