Home News The Monument to Hero of the Soviet Union, Zakaria Belibaev, was installed in the Eastern Kazakhstan

The Monument to Hero of the Soviet Union, Zakaria Belibaev, was installed in the Eastern Kazakhstan 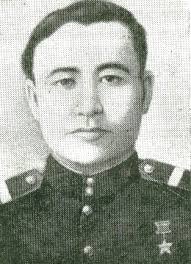 The local entrepreneurs from the village Arhat in the East Kazakhstan region installed a monument to the Hero of the Soviet UnionZakaria Belibaev, reports inform.kz.

Z. Belibaev was born on May 9, 1917 in the village Arkat of the Abai region in the ​​Semipalatinsk area (now the East Kazakhstan region).

He participated in the fights since June 1941. He served as a pontoneer in the 18th individual pontoon battalion/ third pontoon brigade, 60th Army, the central front/.

The soldier Belibaev participated in the fight during the crossing of the Dnieper River, on the north side of Kiev, in late September 1943. He replaced the injured commander and relocated the troops on the right bank of the river. Within a few days, under the heavy fire, he ferried personnel and equipment. When the ferry was damaged, he quickly repaired the problem.

The rank of the Hero of the Soviet Union was awarded by the Presidium of the Supreme Soviet of the USSR on October 17, 1943. He was awarded with the Order of Lenin, the degrees of World War II and medals.

Materials on theme
The story of one photo. Kurmash Imambaev
Mangistau yurt could be included to the UNESCO
Borli, Enlik-Kebek monument
“In one cell with cruel criminals”