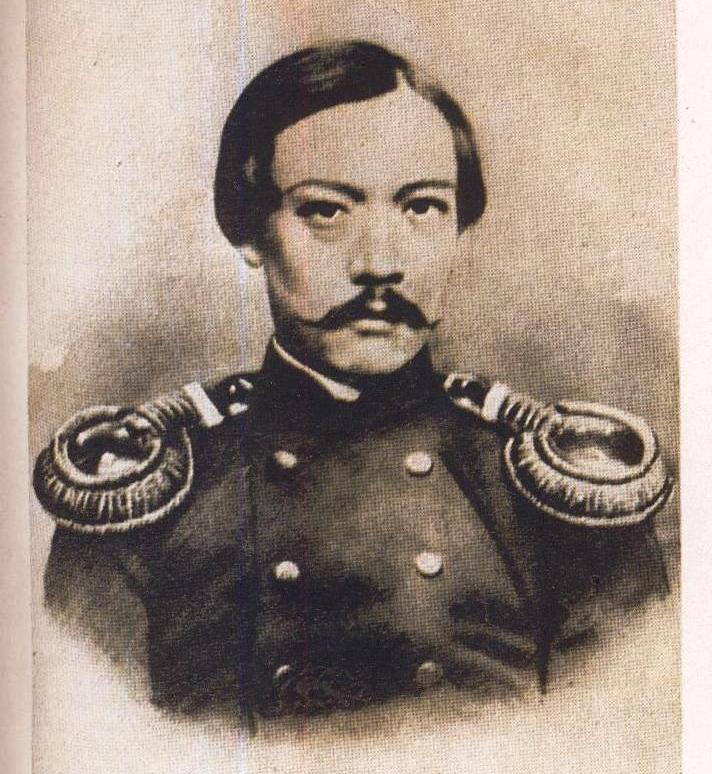 Shokan (real name is Mukhammedhanafia) Chingizuly Ualikhanov (he was born in November, 1835 in Kusmuryn fortification of the present Kostanay region, dead in April, 1865 near Altynemel settlement of the present Almaty region) is the great Kazakh scientist-educator, orientalist, historian, ethnographer, geographer, folklorist, educator, democrat. He graduated from Omsk Military school (1853), listened to the lectures on historical and philological faculty of the University of Saint-Petersburg (1861-1862).

Abylai is his direct ancestor. Abylai’s eldest son, Uali (1741-1821) is Shokan’s grandfather. When Uali died, and his main heir, the eldest son Gubaidulla (Abaydilda), was exiled to Siberia , the worries about the Khan's family, Khanate and power were passed into the hands of the younger wife of Uali Khan - Aiganym. Children of Uali and his senior wife did not want to accept his father's policy of dependence on Russia, but Aiganym and her children remained loyal to Russia. Alexander I gave a special attention to this wife of Uali Khan, ordering to build a luxurious mansion for her in the steppe. “Shokan Ualikhanov was born in this house” – as P.P. Semenov-Tyan-Shanskiy wrote. Shokan spent his childhood first in Kusmurun (when his father was a senior Sultan), then in Kokshetau, on their ancestral homeland - in Syrymbet.

In childhood Shokan was interested in historical poems, tales, legends, stories, listened them attentively. Already in the period of Kusmurun he wrote the poem "Kozy Korpesh – Bayan Sulu". In Syrymbet he painted picture for the plots of legends and tales. All that meant that the spiritual development of clever, capable child began to form early.

Shokan Ualikhanov began his studies at Kusmurun in Kazakh school, where he studied Arabic. By tradition, according to which the son of Khan should know 7 languages, Shokan studied Arabic, Shagatay languages ​​from the childhood, and later learned the Turkic languages ​​of Central Asia.

In 1847 father placed 12-years-old Shokan in Military school with the help of his Russian friends. This educational institution, which considered as the best one in Siberia, was, according to the Decembrist A. Zavalishin, “the place where education and patriotism were flourishing”.

“Knowledge and mental outlook of Shokan rapidly improved in the school, he even became to get ahead of his Russian friends in development. And in 2 years he got ahead of not only classmates, but also those who were 2-3 years elder”, - his friend G.N. Potanin recollects.

The teacher of Russian literature, orientalist N.F. Kostyletskiy, exiled scientist Gonsevskiy, who was teaching history, literary man Lobodovskiy (a friend of childhood and the comrade of N.G. Chernyshevskiy) mainly, influenced spiritual growth of Shokan. Due to Kostyletskiy, Shokan started to be friends with I.N. Berezin in 1852. On behalf of Berezin Shokan wrote review for the book of Toktamys “Khan zharlagyna” (To Khan’s orders). This is his first scientific work.

Thereafter, the teachers of the Military school and progressive intellectuals of Omsk noticed Shokan. The teachers began to consider 14-15 years old Shokan as a future scientist and researcher. Shokan was unceasingly reading books on the history and geography. School administration gave a special permission to Shokan for acquaintance with rare specimens of ancient books in fundamental library, inaccessible to other students. He read with a great interest the "Travels" of P.S. Pallas (1741-1811), who studied Ural, Volga, the Caspian Sea coast, southern Siberia, Lake Baikal, Altai, diaries of P.I. Rychkov, in which he described the history and ethnography of the peoples inhabiting Volga, the Caspian Sea coast, Ural. Erudition of young Shokan, good knowledge of the oriental literature were high praised by S.F. Durov, P.P. Semenov-Tyan-Shanskiy, G.N. Potanin, N.M. Yadrintsev.

In 1853 Shokan graduated from the Military school, he was promoted to cornet rank of mounted troops. He was appointed to serve as an officer of the regiment in the Siberian Cossacks army. Along the way, he was left in the office of Governor-General of Western Siberia. A year later he was appointed to serve as an adjutant of General G.H. Gasfort (1790-1874), who ruled the Western Siberia and north-western districts of Kazakhstan; at the same time he was an officer of the special assignments of the Main administration of the West Siberian region.

In 1856 Shokan joined the military and scientific expedition, led by M.M. Khomentovsky. Expedition was instructed to investigate thoroughly the Kyrgyz land, to make a map of Issyk Kul surroundings. This gave Shokan the opportunity to be engaged in scientific work. Drawing attention to the ancient epos of the Kyrgyz people "Manas", he visited the town in the upper reaches of Ili, where Manas had fought. Having reached Issyk Kul in mid-June, they made a map of its east and north-east coast. On several routes he was with Semenov-Tyan-Shanskiy, with whom he got acquainted in the spring of 1856 in Omsk at the house of Gutkovskiy, since they were friends. In 1856-1857 years, having met in Zhetysu, they worked together on scientific work. Semenov-Tyan-Shanskiy wrote that during the discussion of issues related to Central Asia, Shokan’s opinion was a decisive.

Being in the expedition, Shokan gathered orientological, entomological collections and made herbarium, studied the fauna and flora of Zhetysu and the surrounding area of Issyk Kul, participated in drawing up the map of Issyk Kul. He closely studied the culture of the ancient ruined cities of those places, ancient irrigation system, and the remnants of architectural heritage, ethnography and stone sculptures. He found that there was a sedentary way of life in Dzungaria, which also had been subordinate to Russia, and especially on the banks of the Ili River. Visiting the area from Alakol to the Tien Shan, he fixed genealogies of Kyrgyz people, their songs, stories, legends, epos "Manas" in the Kyrgyz clans called Bugy, Sarybagysh, Soltu.

Shokan’s journey to Kashgar in 1858-1859 years contributed to the fact that his creation in the field of scientific education raised another step. In St. Petersburg, Shokan established scientific links with Russian scientists, researchers of the East, especially with the editor of register of "Russian Geographical Society" Professor A.N. Beketov, with E.P. Kovalevsky and F.S. Osten-Saken from the Asian Department, Professor of St. Petersburg University I.I. Zakharov, who was a consul in Kuldja. Together with I.I. Zakharov he taught Turkic languages ​​in higher school of the Asian Department. V.B. Grigoriev, V.P. Vasiliev, V.V. Velyaminov-Zernovand many others often were guests in the apartment of Shokan Ualikhanov. In St. Petersburg Shokan wrote articles in scientific, artistic magazines, in the encyclopedia. Materials of Shokan were used by A.F. Golubev, D.I. Romanovskiy, who studied Kazakhstan, Central Asia, Issyk Kul. The officers of the General Staff also used the information of Shokan.

Disease (tuberculosis) began to progress and on the advice of doctors he returned to his native land in spring 1861. Living among the people and recognizing that the people subjected to the double oppression, he agreed to become a senior Sultan in Atbasar District in 1862. "I agreed to become a senior sultan with the aim to assist my compatriots in protecting them from arbitrariness of officials and Kazakh bais. The first thing that I pursue - to show my countrymen by my own example that an educated senior sultan may benefit more," - he writes in a letter to F. Dostoevsky.

In his short life Shokan Ualikhanov left many valuable works dedicated to social and political structure, history, geography, ethnography and folklore of the peoples of Kazakhstan and Central Asia. He was the first who provided the information that Balkhash and Alakol once represented a single water surface, and on the special flow of wind from Dzungaria gate. After a review of the work "Khan zharlygyna" Shokan researched the work of K. Zhalairi "Jami-al-tavarikh" translated the main sections from this document to the Russian language, and compiled a dictionary of oriental terms, based on them.

He wrote a work entitled "Genealogy of the Kazakhs", based on the works of Abulgazy "Shaibani-name", "Shezhre-and -turk", the theoretical value of which is high. Shokan considered the work "Jami-at-tavarikh" as an unique historical work, a collection of historical legends of Kazakhs in XV-XVI-XVII centuries. Later studying the books "Babur-name", "Tarikh-i-Rashidi" he appropriately used the information obtained therefrom, in his writings. Until the end of his life he was considered as an employee of the General Staff and the Asian Department. Disease progressed and Shokan Ualikhanov died in the village Koshentogan, Tezek settlement, at the foot of the Altynemel ridge.

The works of Shokan Ualikhanov, which have made a significant contribution to the various branches of science of its time, are highly appreciated at all times.

Materials on theme
“My Country. My Family. My History” photography project
Roadside service in country must comply with int’l standards
Kokshetau hosted a campaign “Along the roads of memory”
Meeting of Kazakh scientists with Ambassador of Russian Federation M. Bocharnikov