Home News What is common between Clara Zetkin and Tomyris?

What is common between Clara Zetkin and Tomyris? 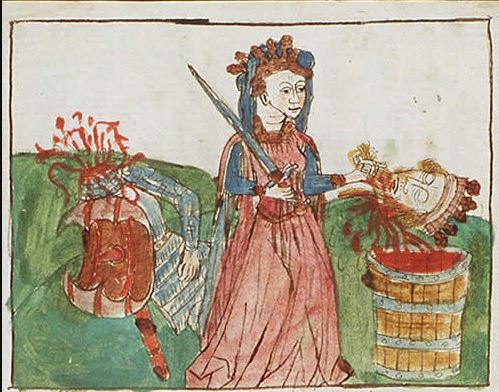 In many Soviet apartments, simple elements of art hung - a copper picture with a similar plot: a woman with a sword in her hand holds the defeated head of the enemy. Who is this woman?

March 8, according to the tradition of the Soviet era, men devote all their attention to women: give women flowers, raise glasses in their honor, and say pleasant compliments and wishes.

International Women's Day is a holiday of spring and special attention to a woman. History recalls that the day of March 8 was originally conceived as a holiday for women revolutionaries, women who aspired to be equal in rights with men.

Equality of women in Kazakhstan is not only approved in the Constitution of the Republic of Kazakhstan, but also by their active participation in politics, business, science and other spheres of society.

The tradition of equality has deep historical roots. The first female image - a symbol reflecting the idea of ​​national unity, freedom of love, courage is the famous Queen of Massagetae Tomyris or Tumar. Her name is not just a symbol, but a whole national brand.

The facts of the real existence and reign of Tomyris in the 6th century BC, the chronicles of the liberation wars of the Saks under her leadership against the Persian king Cyrus are fixed in the world and Kazakhstan historiography. The stories described by Herodotus are a textbook:

Massagetae had a woman reign after the death of her husband. Her name was Tomyris. Cyrus sent messages to her about the matchmaking for her, wanting to have her as his wife. But Tomyris, realizing that he was not wooing her, but the kingdom of the Massagetae, rejected the marriage proposal. After that, Cyrus, since he failed to cunning, turned to Araks, openly started a military campaign against Massagetae, setting bridges for troops crossing the river and building towers on ships for crossing the river. While he was busy with this, Tomyris, having sent a bellman one, declared the following: "The king of the Medes, stop trying to achieve what you are trying to achieve. You do not know whether your plan will be successful for you. Stop the campaign, reign over your own and put up with it, seeing how we rule our subjects.

"Filling a wineskin with human blood, Tomyris searched for the corpse of Cyrus among the dead Persians, and when she found it, shoved his head into this wineskin and, mocking the deceased, she began to say:" You, me, alive and defeated you in the battle, ruined, capturing my son with cunning. I, like I threatened you, will give you blood."

"This cruel plot artists used as an allegory of justice, the inevitable retribution for evil, deception, betrayal. City magistrates ordered pictures on this subject for placement in courtrooms. Theologians cited the story of Tomyris and Cyrus as a "parallel" of the Old Testament stories of Judith and Holofernes, and the image of the queen, avenging the cruel king, was viewed as a type of the Virgin Mary, defeating Satan." 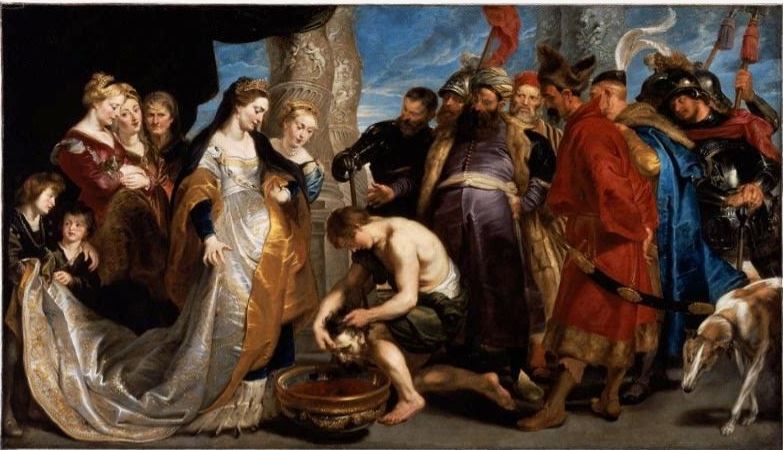 Rubens. "Tomyris with the head of Cyrus", 1622, Museum of Fine Arts, Boston, USA 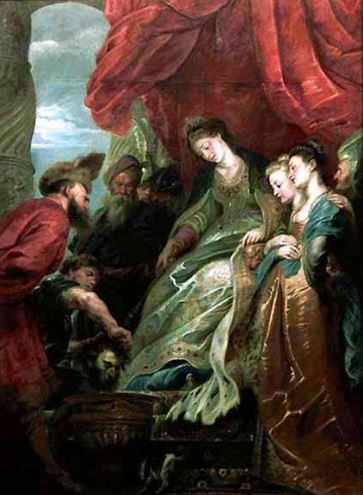 The Great Rubens painted this story twice: the triumph of Tomyris when the head of the defeated Cyrus was plunged into a cup of blood (the artist somewhat retreated from Herodotus, drawing a bowl instead of a wineskin).

The canvas colorfully emphasizes the meaning of what is happening. It is attended by children and grandees of different ranks. The queen, as it were, gives a lesson of hardness to both.

She demonstrates both her strength and her cruelty towards her enemies. For heirs, this is a lesson, how to deal with enemies. For the nobles - a warning about what awaits them if they rebel against the queen.

A wonderful poem "The Tale of Tomyris" was written by Madali Naimanbaev. A lot of interesting and new material is presented to the readers. The queen Tomyris is especially interesting. It is noteworthy that the author wrote in view of the culture and history of the peoples of the steppe. 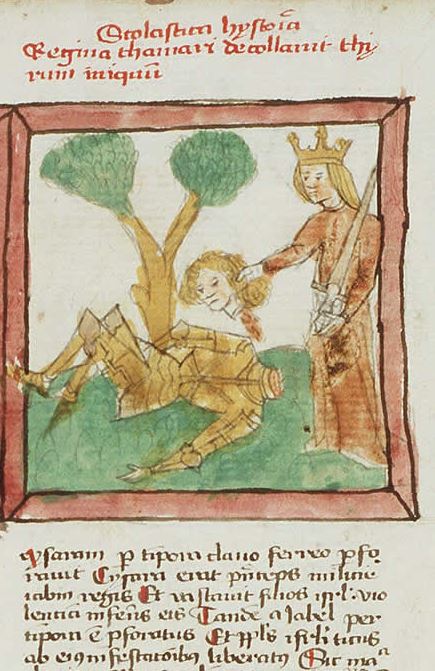 The daughter of the steppes Tomyris - the head of Massagetae,

The granddaughter of Madiy, the asterisk of our land.

Her image in the people is forever immortal,

As then the Saks’ enemies fell.

She was left an orphan by birth -

Zarina went to a better world during childbirth.

Childhood passed in campaigns with her father,

He became the leader of Massagetae.

At five years old, she had already mounted herself on horseback

And grasping a mane of the savage-horse

With a yelp scurried through the expanses.

At six, she picked up the akinak sword,

Learning the lessons of fighting with her father.

And at ten - a fierce pressure somehow

Could hold back with difficulty.

She won glory in thirteen shooting,

Of the Sak’s bow with a tight string.

With both hands, at a gallop - but hit!

To the finish line rushed, as a rule, the first

And the fight on the spears did not pass by,

And then she is master - strong nerves!

Not only as a warrior, was she famous for

Her wondrous beauty - a bright flame!

The very perfection was created

But the heart of the beauty is solid as a stone. 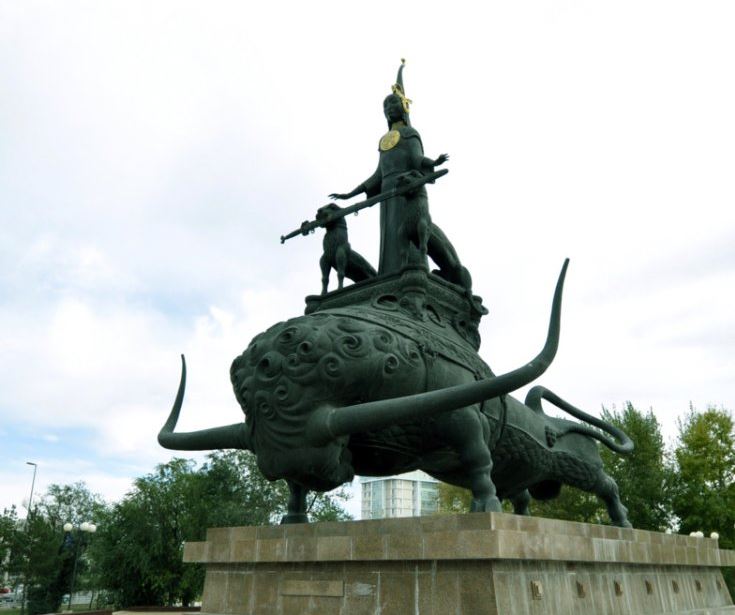 We must pay tribute to the Queen of the Saks. She contributed not only to the history of the Great Steppe, but also to the world culture of mankind. And how many more such daughters proudly defended the Kazakh land from the Dzhungars, Chinese aggression, from the colonial expansion of the Russian Empire, during the Great Patriotic War. You are always in our memory!

Author: Arman Suleimenov
Use of materials for publication, commercial use, or distribution requires written or oral permission from the Board of Editors or the author. Hyperlink to Qazaqstan tarihy portal is necessary. All rights reserved by the Law RK “On author’s rights and related rights”. To request authorization email to mail@e-history.kz or call to 8 (7172) 57 60 13 (in - 1163)
Қазақша Русский English
MOST READ
Month Year
Burial mounds of the southwestern part of the Semirechye region
Union of the Archives and Library
The referendum on the Constitution is a significant stage of democratization
Heroic mothers of the great steppe
Philosophy of the Emblem
14 monuments at Tekturmas
The rural akims: the country's hope is in the elections
Kazakh historical drama Tomiris premiered in Istanbul
Stolypin about the worries and hopes of immigrants to the Kazakh steppes
ALASH IDEA IS THE PROTECTION OF KAZAKH STATEHOOD
A tireless explorer of the Kazakh land
SWITCHING TO THE LATIN ALPHABET – UNITE ALL KAZAKH PEOPLE
Kunaev Dinmukhamed Akhmedovich
People who eat horses will kill you
Kazakhstan's participation in the Winter Olympics has a long history
Materials on theme
Kali Zhussup’s Work of Art
THE ASSESSMENT OF RUSSIAN LEGACY IN POST-SOVIET KAZAKHSTAN. PART 2
Ancient wind-instruments of the Kazakhs
Why did dzhigits (young fellows) swallow tobyk (ankle)?