Kalyn mal – ransom for the bride 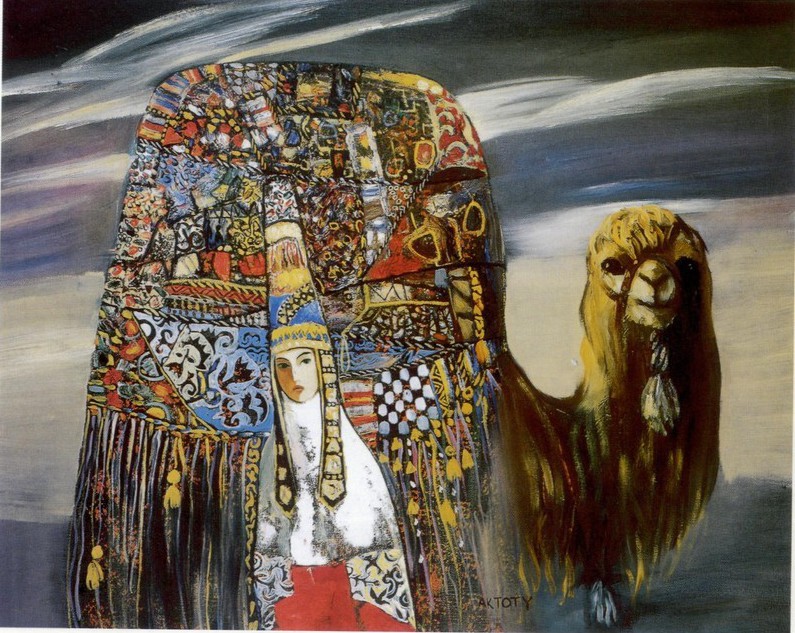 The custom was persecuted by the law in Soviet times.

By definition pf some researchers, the bride price in fact was not ransom, but compensation of expenses expended on girl’s marriage. The parents spent a lot of money on performing of various ritual ceremonies, dowry, wedding expenses and others. The ransom compensates it.

Kalyn mal, the cattle for bride consists of the following parts:

1.Valuable ‘heads’ are the most valuable of the necessities for daily life on the farm: a) weapon; b) chain armor; c) horse d) camel. The price of each head was equal to five heads of cattle. People who were not able to pay it, paid 20 heads of cattle in return. Subsequently, valuable ‘heads’ were replaced by household furniture and other things.

2. Cattle. That was the main part of the dowry. It was paid depending on income.

3. Ulu. A groom paid that part when he arrived in the village for the first time — from 30 to 80 horses.

4. Wedding cattle — cattle on wedding costs. Its amount corresponded to the amount of dowry and was from 20 to 70 heads. In addition, the groom provided the bride’s parents with felt for the yurta.

5. Dairy payout. It did not exceed two camels. That also included the most expensive fur coat and a saddle.  Of course, the described form of dowry was only for the rich people and there were other forms of amount for poor Kazakhs, corresponding to their status.

Interesting thoughts were shared by a scholar G.Akpanbekov. He said that Kalyn mal is just honor given to the bride and her mother. As 47 is not the number of cattle, but ‘seven’ forty times, i.e. forty weeks, 9 months and 9 days (duration of a child’s stay in the womb). So, kalym is in fact, is nothing but a gift to the mother who gave a birth, educated and raised the bride.

Use of materials for publication, commercial use, or distribution requires written or oral permission from the Board of Editors or the author. Hyperlink to Qazaqstan tarihy portal is necessary. All rights reserved by the Law RK “On author’s rights and related rights”. To request authorization email to mail@e-history.kz or call to 8 (7172) 57 60 13 (in - 1163)
Қазақша Русский English
MOST READ
Month Year
Kazakh historical drama Tomiris premiered in Istanbul
ALASH IDEA IS THE PROTECTION OF KAZAKH STATEHOOD
Stolypin about the worries and hopes of immigrants to the Kazakh steppes
A tireless explorer of the Kazakh land
SWITCHING TO THE LATIN ALPHABET – UNITE ALL KAZAKH PEOPLE
Kunaev Dinmukhamed Akhmedovich
People who eat horses will kill you
Kazakhstan's participation in the Winter Olympics has a long history
Rebooting a field of science and education
Recorded history of Kazakhstan. Part 1
Historical Dates on the Bosphorus
Recorded history of Kazakhstan. Part 2
Materials on theme
Kultobe - Yassy – Turkestan
The sounds of azan from ancient mosque
Sauran as the part of cultural heritage RK
The custom of Kazakh people - “Tabak tartu” (Serving meat for guests)