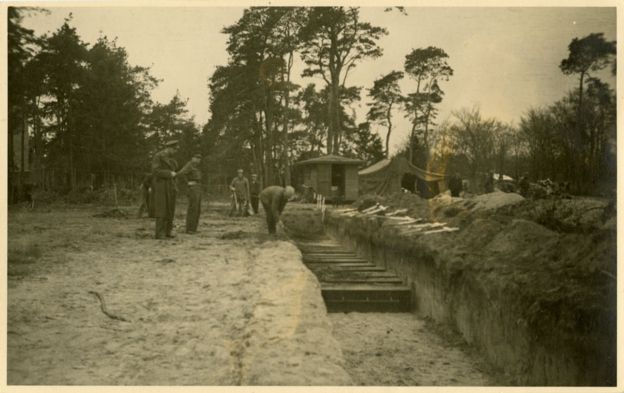 To give rebuff to the German troops, the Central Asians left their homes and went to the front. Later, dressed in rags, they found themselves in the Dutch concentration camps

Most of those killed in the forest near the city of Amersfoort in 1942 were Uzbeks. Not many remember the 101 Soviet soldiers. And yet, thanks to the Dutch journalist, this sad story will not be forgotten.

Every spring, hundreds of Dutch men, women, old people and children gather in the forest near Amersfoort, not far from Utrecht. These people light candles here in memory of the 101 Soviet soldiers who were shot by fascists in this place, and then were forgotten for more than half a century. 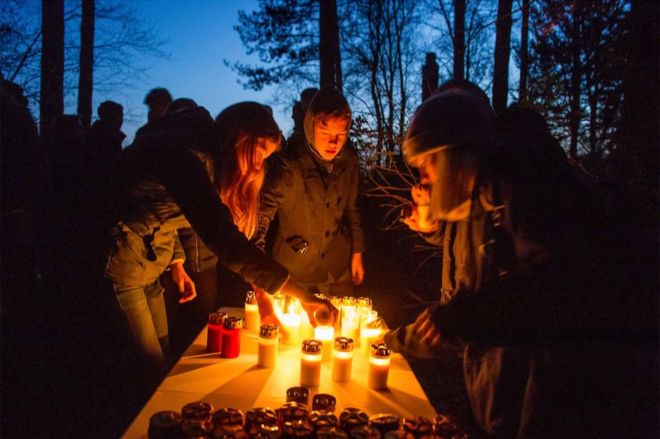 The story of the buried here, said Dutch journalist Remco Reiding, who returned 18 years ago to Amersfoort, after several years of work in Russia. According to him, there is a nearby Soviet military cemetery.

"I was surprised because I had never heard of it before, I went to the cemetery and began to look for witnesses and collect materials on archives," says the Dutch journalist.

In the course of the investigation, he finds out that 865 Soviet soldiers were buried at this place, all but 101 soldiers were brought from Germany or other regions of Holland, however, unnamed 101 people were killed here, that is, in Amersfoort.

These 101 people were taken prisoner near Smolensk in the first weeks after Germany invaded the territory of the Soviet Union and sent them to the Nazi-occupied Holland for propaganda purposes. 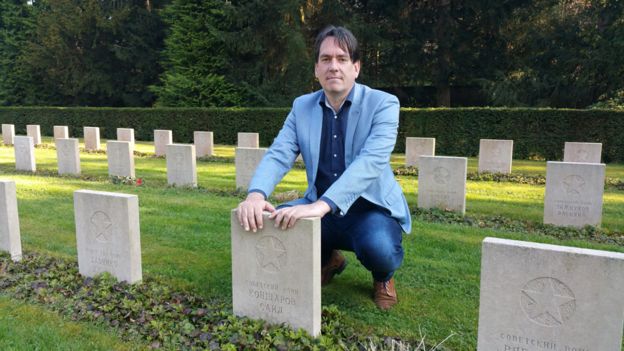 "They specifically selected prisoners with Asian appearance to show them to the Dutch who resisted the Nazi ideas, who called them "subhumans" hoping that as soon as the Dutch saw what Soviet citizens look like, they would join the Germans," says Reiding. In the concentration camp of Amersfoort, the Nazis held the Dutch Communists - it was their opinion of the Soviet people that the Nazis hoped to change. They were held there since 1941 together with the Jews. But the plan failed.

"They were small and very weak".

91-year-old Henk Broekhuizen - one of the few witnesses of that bloody war. He recalls that, as a young man, he observed Soviet prisoners who arrived in the city.

"When I close my eyes, I remember their faces," says old Henk, an eyewitness of those events - dressed in rags, they were not like military men. Only their faces were visible. The fascists led them along the main square from the railway station to the camp. They were small and very weak. Their legs were also wrapped in old rags. Some were barely walking; they were supported by the comrades who were coming along." Some prisoners looked into the eyes of people who came to look at them and gestured that they were hungry. "We brought them water and bread. But the fascists took everything away from our hands. We were not allowed to help them. We did not know what they had to endure," says Broekhuizen. And he said that he had never seen them again. 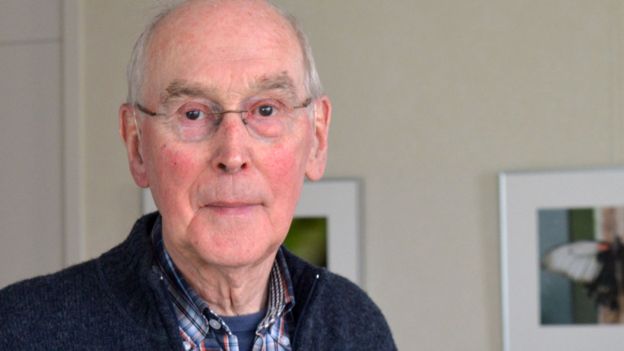 But journalist Remco Reiding has already begun to collect information about the events that have happened on the Dutch archives.

A loaf of bread for the hungry Uzbeks from the fascists

Reiding also found out that the captives from Central Asia in the concentration camp were much harder than other peoples. "The first three days in the camp they were kept without food, in a territory enclosed by barbed wire," the journalist said. "The German film crew was preparing to film the moment when these "barbarians" started to fight for food, which was very important for propaganda. The Nazis throw a loaf of bread to the hungry Uzbeks, but suddenly one of the Uzbeks stands, takes the bread and starts to share it with a spoon, and the others waited patiently for a while, but they did not fight, and then they divided the pieces of bread equally. Fascists were disappointed."

But for the captives the worst was ahead.

"Central Asians were given half of the portion that other prisoners received. If there were other prisoners who helped them, they too were not left without punishment. When they ate the remnants and the potato peel, the Nazis beat them because they eat pig food," says Uzbek historian Bahadur Uzakov, who lives in the Dutch city of Gouda and also deals with the history of the Amersfoort camp. 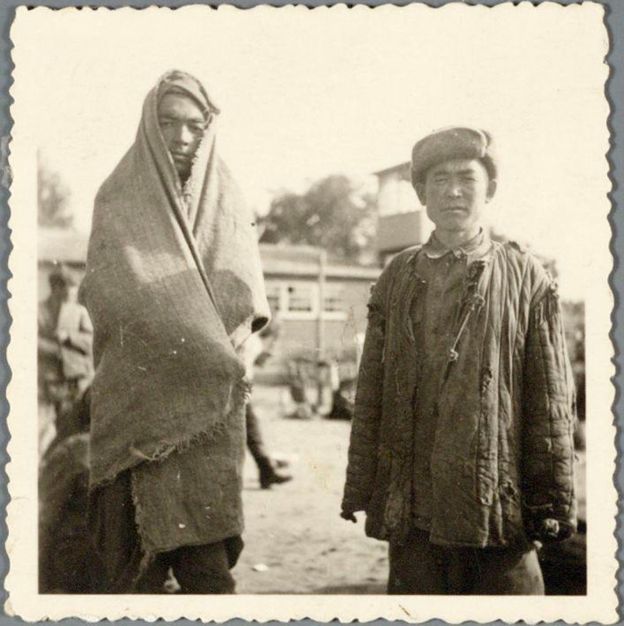 "They were constantly beaten"

From the confessions of camp keepers and from the memories of other prisoners that Reiding found in the archives, and in 2015 published in his book, the Uzbeks in the camp were constantly beaten and allowed to perform the worst camp work - for example, dragging stones and sand or logs.

One of the most shocking stories is the actions of the camp doctor, the Dutchman Nicolas van Nieuwenhuyse.

"When the two Uzbeks perished, he ordered the other prisoners to behead them and cook their skulls until they were clean. Then he put these skulls on his desk. This is real madness."

Hungry and exhausted Uzbeks began to eat mice, rats and plants. Of these, 24 people died, unable to withstand the harsh winter of 1941. The remaining 77 ceased to be needed when weakened enough that they could no longer work. For this reason, in the early morning of April 1942, the prisoners were told: "You will be transported to the south of France, since nature will be favorable there for you", and with these words they will be taken out of the camp. However, in no South France they were not transported, but they were brought to the forest, which was behind the camp. Here they were all shot and buried in a common grave. 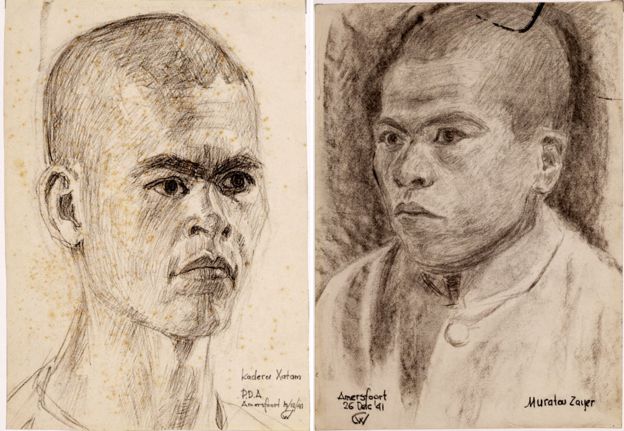 "Imagine that you are 5 thousand kilometers from the house where the muezzin summons everyone to a prayer, where the wind whirls sand and dust in the market square and where the streets are filled with the aroma of spices. You do not know the language of strangers, and they do not know yours. And you do not understand why these people treat you like an animal."

Information that would help identify these prisoners is very small. The fascists burned the camp archive before the retreat in May 1945.

Only one photo has survived, on which two men are captured - their names are unknown. Of the nine hand-painted by Dutch captive portraits, only two have signed names. "Names are written incorrectly, but they sound like Uzbek", says Reiding. "One name is written as Kadiru Xatam, the other as Muratov Zayer. Most likely, the first name is Kadyrov Khatam, and the second is Muratov Zaire." I looked at the drawing right away recognized Uzbek names and Asian faces. Frowning eyebrows, other facial features ... all this is considered beautiful in my country. These are men of 20 years, perhaps even younger. Probably, before the war, their mothers were already looking for suitable brides, and their fathers had already bought a calf for the wedding feast. 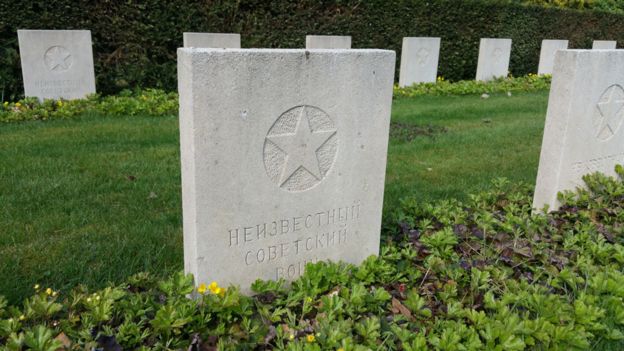 One hundred thousand Uzbeks are believed to be missing. I feel that my relatives could be among them. My two great-grandfathers and my wife's grandfather did not return from the war. Sometimes I was told that they ​​had married German women and decided to stay in Europe. This story our grandmothers composed for their own comfort.

There are many reasons why the 101 Central Asians shot at Amersfoort, except for those two whose names are known, are not studied. One of the reasons is the Cold War, quickly replacing the Second World War and turning Western Europe and the USSR into ideological enemies.

Another is Uzbekistan's decision to forget about the Soviet past after gaining independence in 1991. War veterans were no longer considered heroes. The monument to the family, who adopted 14 children who lost their parents during the war, was removed from the square in the center of Tashkent. True, the new president of the country Shavkat Mirziyoyev promises to return it back. In a word, the search for the soldiers missing decades ago was not part of the priorities of the Uzbek government.

But Reiding does not give up: he thinks he can find the names of those shot in the Uzbek archives. "The documents of the Soviet soldiers - the survivors or those whose deaths were not available to the Soviet authorities - were sent to the local KGB offices." Most likely, the names of 101 Uzbek soldiers are kept in the archives in Uzbekistan. If I can get access to them, then I will find at least a part of these 101 people," - says Reiding.