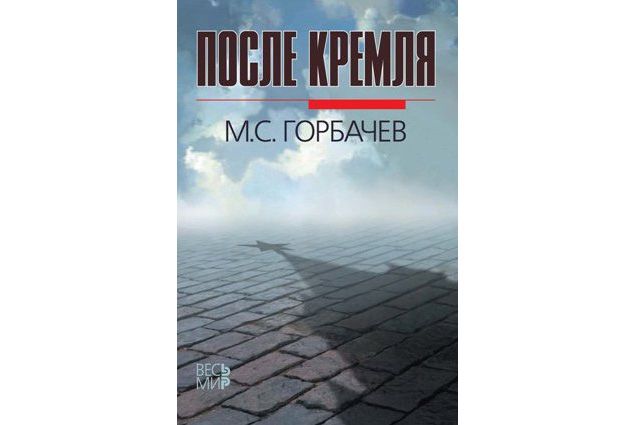 Continuing to study the situation of the early 90-ies we would like to present to your attention the position of M.S. Gorbachev, the first and last President of the USSR

Mentioning in the passages the situation in Russia we should understand that exactly the same situation at that time was in Kazakhstan, and other CIS republics. Mikhail Gorbachev, in his book "After the Kremlin" told about his life after leaving his post as head of state and shared reflections on the most significant events that took place in the country and the world. In 2016 the book was translated into English and was published by Polity Press, entitled "The New Russia". Mikhail Gorbachev recalls the events of 1991-1993. Among them - the fall of the USSR, the economic crisis, the execution of the Russian parliament.

The coup failed, but it opened the way to the separatists, radicals, extremists. The consequences of this can be listed for a long time. The collapse of the union state, the rollback of democracy in almost all the republics, the chaos in the economy, which benefited the most greedy and unscrupulous and turned almost everyone in the poor, ethnic conflicts and bloodshed in Russia and the other republics, and finally – shooting of the Supreme Council of Russia in October 1993.

I am often asked if I feel responsible for all this? It is said that in late 1991, after Belovezha collusion I "should act more decisively". My answer: I fought for a unified state to the last. It was impossible to prevent a slide towards civil conflict situations, and possibly to civil war. Clearly, what this could mean in the country, packed with weapons, not only conventional but also nuclear. Therefore, after serious consideration, I came to a decision that I believe was the only right that time in the circumstances – and said that I stop discharge duties of the USSR President.

Belovezha collusion - is the story of a great deception. And besides - self-deception of the participants, particularly of the Russian side. They hoped that invented CIS would be a "Union without Gorbachev". Did not work out.

What I tried to prevent by all means, happened - a union state was destroyed. And in the very last days of my activities in office I saw my role in that it did not lead to a further split of the society, to break economic relations, to strengthen de-integrated processes.

In early 1991, the minimum level of pensions and salaries remained at the level of 100 rubles, and the average salary was in two - two and a half times higher. In early 1992, the lower level of income of the population rose in three and a half times, the average - a half to two times. But bread rose to 10-15 times, milk - 15-20 times, butter and sour cream - 30 times, potatoes - 10-20 times, and 50-100 times in the market. Price shock in January 1992 was preceded by a continuous emptying of stalls in December 1991. There were no matches and salt. Cereals, sugar were bought in bags. 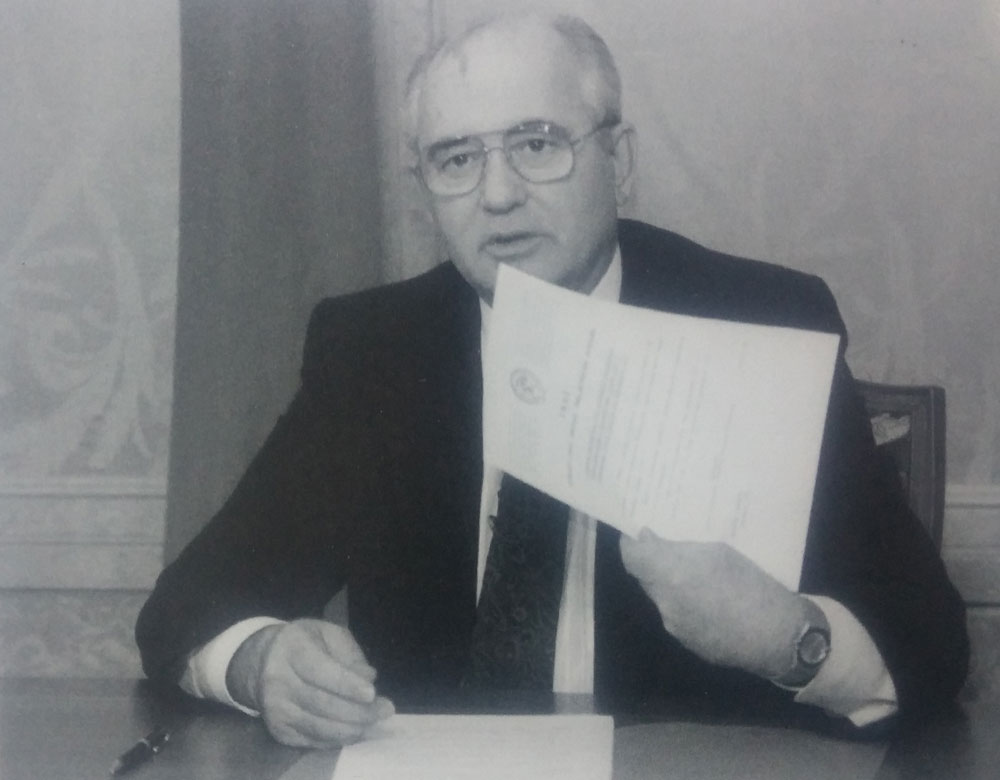 People understand that we were talking about the inevitable rise in prices, and rushed to buy goods. Producers and trade organizations in anticipation of rising prices held goods in their warehouses and depots. As a result, inflation expectations rose up more and the entire turnover was virtually paralyzed in recent months and years. And the blame for the many hours in queues and empty stalls was under the pretext of "Gorbachev's reconstruction".

The price increase turned out extremely painful to people. Already in the first week of January in many Russian cities socio-political situation began to deteriorate, spontaneous protests started.

Crisis of government caused by the irreconcilable contradictions between the President and the Supreme Council, continued and threatened to turn into big trouble. The underlying reason of it, was, of course, the deteriorating situation in the country. We conducted our position analysis in the Fund, and the conclusions were very disappointing: "In the mass of the population opposition sentiment is growing and distrust of the central authorities - both the President and the Supreme Council, but the majority - for various reasons - fear of new steep changes. The relative balance between the executive and legislative power in the center is very unstable".

However, I was still convinced that the only hope of new elections could give the output of the protracted crisis.

Yeltsin had a different plan, and, apparently, to the end of summer (1993 - Ed.), he finally confirmed his intention to resolve the crisis by getting rid of the Parliament. Throughout September the president was fully occupied with the preparation of the power to eliminate the parliament. Accompanied by the ministers of defense and internal affairs personally checked the readiness situated near Moscow elite divisions and units to carry out his orders. He appeared on television screens in military fatigues with maroon beret and a combat rifle in his hands.

On September 21 President of Russia signed a decree № 1400 on termination of powers of the Congress of People's Deputies and the Supreme Soviet. To the constitutional court the president "recommended" to stop meetings until the election of the new legislative body - the Federal Assembly, which was appointed on 12 December. 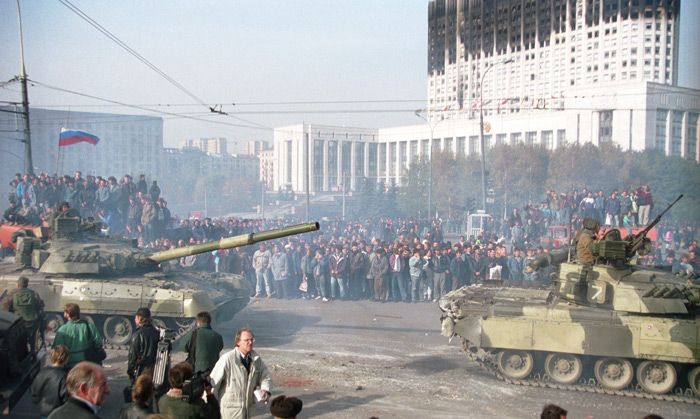 Yeltsin regarded this fact as a direct threat against him personally.

I recommended Yeltsin to return the situation to that which existed prior to 21 September in the near future. Naturally all the recent decisions of the Supreme Council should be repealed.

September 29 with an appeal to prevent bloodshed talked the Patriarch of Moscow and All Russia Alexy II. The Church joined the process of finding a compromise. Most of the members of the Supreme Council, who met in a building, cordoned off on the president's order was ready for it.

But on the afternoon as October 3 the situation in Moscow escalated. Groups of demonstrators, armed men, and provocateurs headed by A. Makashov and V. Anpilov broke through the cordon near the "White House", seized the City Hall on Novy Arbat and headed for the Ostankino television center.

By the evening on Yeltsin’s decree a state of emergency was introduced in Moscow. At Ostankino television center was exchange of shots, as a result of which were killed and wounded. Dozens of people, some journalists died. We had to take the situation under control. By the morning as October 4 it was done.

But at this moment, at 10 am on the bridge before the "White House" moved tanks and opened fire on the building! In fact, it was a short-term civil war which turned into the deaths, according to official figures, of 160 people in the center of Moscow.

This time, there were about a thousand people in the building - the deputies, members of the staff, service staff, journalists, women, children. House began to burn - flames and black smoke covered it window by window, floor by floor.

At 14.30 people with a white flag began to go out of the building. Rutskoi, Khasbulatov, Makashov were arrested. Boris Yeltsin addressed to the residents and reported about the suppression of "armed fascist-communist revolt" in Moscow.

In my view, what happened at the "White House" was unjustified revenge. This is unforgivable. This tragedy, to which brought us the leaders of the Supreme Council, the presidential structures, executive power, puts an end to their activities. Today, none of them has the right to stay in power. Many people understand that after all that happened we could not be the same as we were until now.

Materials of the book were used