Akylbek Akhmetzhanov: “We want to revive the Kazakh title Sultan” 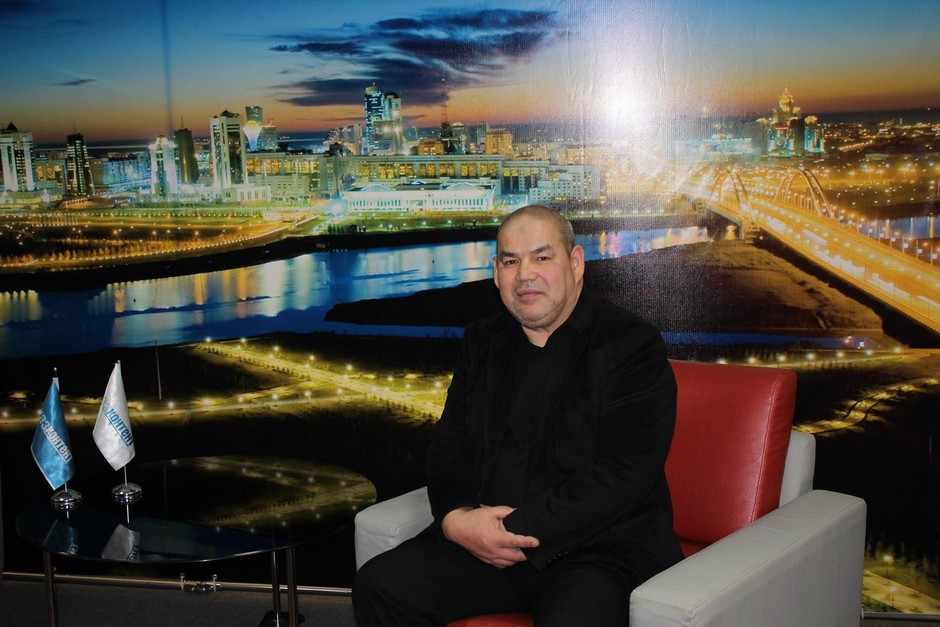 I never stopped thinking how to exalt Ulytau how to turn it into a center of the Turkic world, how to develop the tourism industry

Akylbek Akhmetzhanov, although he is a chemist-biologist by his profession, never stayed away from important events related to our history. As the director of public fund "Ulytau - ult uyasy" since 2010 he is the organizer of many celebrations, contributing to hold them to the highest level. Being a descendant of Genghis Khan, he cares about the history in every way and does more action, less talks. All this work, in the end, was rated the Order of Genghis Khan. A. Akhmetzhanov was born on November 15, 1965 in Kaztalovka WKO. In 1982 he graduated from the Ural Pedagogical Institute as a chemist-biologist. Akylbek Akhmetzhanov was the organizer of many historical and social events, in particular: Ulytau expedition in 2010; International Conference in Turkestan in 2011 (with the participation of representatives of Mongolia, China, Russia, Iran and other countries); the discovery of the mausoleum Khaknazar Khan in 2012; Conference dedicated to the 300th anniversary of Ablai Khan in 2013; Ulytau conference dedicated to Zhoshy Khan in 2015. 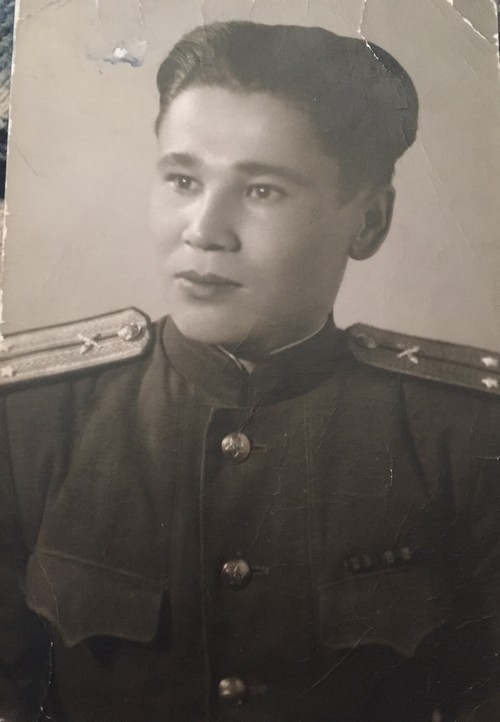 - Akylbek Maksatovich, let’s start our conversation with your interest of the history. When this interest appeared?

- When we were young, we paid no attention to the history and national values. Because, those times did not require this. Growing up and learning the history of our origin, I began to interest deeply and earnestly in the history. A man who does not know his history, loses himself, so I had a lot of esteem and interest in this respect.

- After reviewing your biography, we knew that you came from a noble family and were a descendant of Genghis Khan, tell us about it.

- My father Maksut - worked in education all his life. He put a lot of effort in the genealogical book of the Kazakh khans. An experienced researcher Arman Kiyatov prompted him to write a genealogical table and blessed him. My grandfather Akhmetzhan (Ahmetshi) was very educated, literate man, he always worked in high positions, for example, in 1918, during the formation of the Soviet regime, he worked as a secretary for the I Lbischenskaya of CPSU. His wife Zeinep - was the daughter of the Mufti of Kazan, the sister of the fourth wife of Zhangir Khan - Fatima. Then it turns out that my grandfather Akhmetzhan accounted native brother of Zhangir Khan. 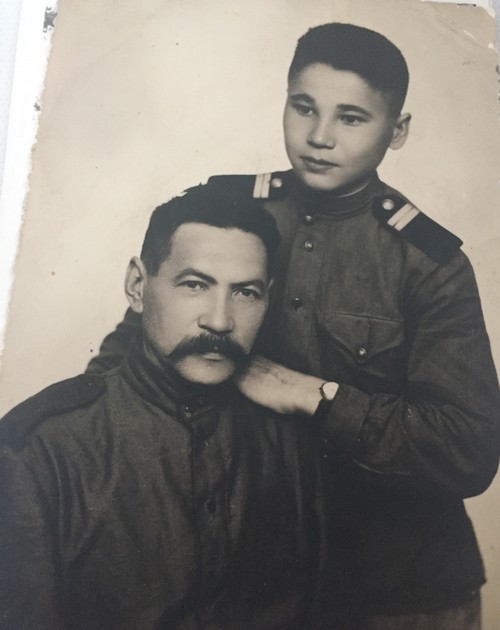 I also want to emphasize that my grandparents took part in the opening of the 16 mosques in Bukey Orda. Currently, of these mosques are preserved only Bespishen and Ordabay places. My great-grandfather Shamsiyatdin was one of the Kazakh sultans graduated from Neplyuev school in Orenburg, and his wife was the daughter of the first Kazakh academician, a member of the Russian Academy of Sciences, member of the Russian Geographical Union Empire - Mohammed-Salyk Babazhanov. If you delve further, you can reach Kaiyp and Yesim Khans. As a descendant of such noble people, I have special respect for history. Unfortunately, in the years of repression in 30s, the Bolsheviks learned about the Khan origins of my family, shot many of its members. It is also one of the saddest pages of our history.

- Please, tell us about your father's initiative in writing genealogical table of Yesim Khan descendants. Do you have this family tree? Is it published as a book?

- Yes, I am glad that the experts in this area, well-known personalities like Arman Kiyatov gave a decent assessment of my father’s work. I recalled one event associated with it. My grandmother Zeynep had a bracelet, and when we played, being children, this bracelet was thrown into a well. Afterwards, we pulled this bracelet, and knew that there was written the genealogical table of our dynasty.

- Your main specialty in the field of natural sciences (chemist-biologist), in spite of this, you are taking an active part in many social and historical activities. Is it your real interest in the history or just a cheap PR?

- Our history has a lot of secrets to uncover, unknown secrets, so I try in every way to take part in significant events and activities related to our history. The roots of our history run deep into the past, and it is our duty - to preserve and pass on our knowledge to the next generation.

- You were awarded the International Order of Genghis Khan. What did this order give you? What does this award mean for you?

- Genghis Khan Order is very important. His presentation takes place every year in April in the form of the festival. This Order is awarded to world famous personalities, such as Spain's King Juan Carlos, Prince Charles of Great Britain, the writer Mukhtar Magauin and others. For me, in general, for my life, Ulytau expedition is of great importance. We gathered much information and opened a new page of our history. In addition, I participated in the International Conference in Turkestan in 2011 (which was attended by representatives from Mongolia, China, Russia, Iran and other states), organized the opening of the mausoleum of Khaknazar Khan in 2012. And as you know, in 2013 the conference on the day of the 300th anniversary of Ablai khan was held, where we were also actively involved. And in 2015, engaged in the organization of Ulytau conference dedicated to Zhoshy Khan. 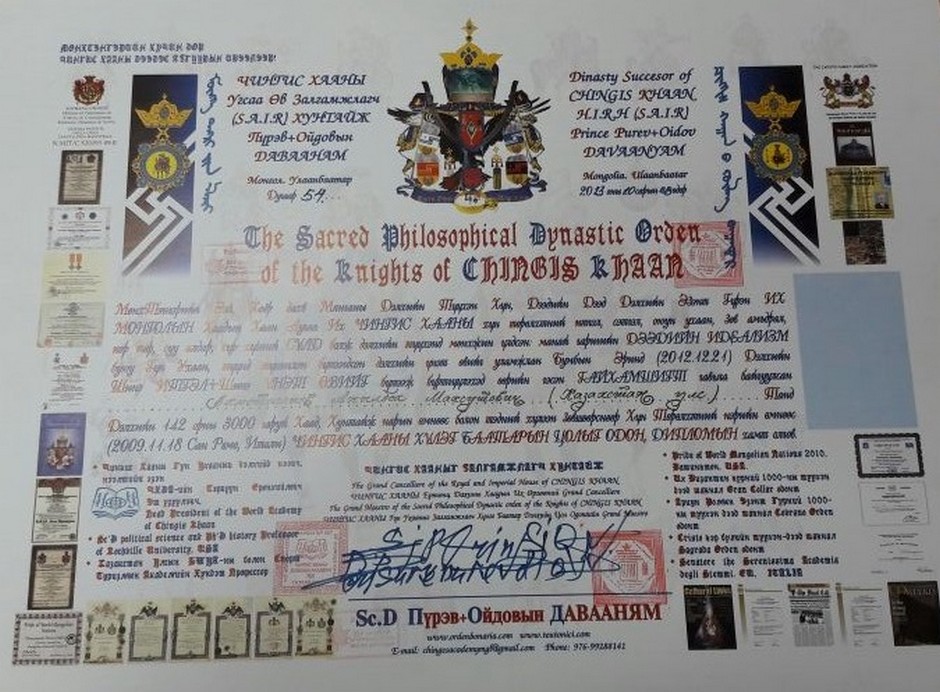 After that I visited the good ideas - how to exalt Ulytau, how to turn it into a center of the Turkic world, how to develop the tourism industry in the region, and how to acquaint the younger generation with this wonderful and historically important area. Why we cannot conduct a ceremony of awarding school leavers with a distinctive sign "Altyn Belgi" at the foot of Ulytau?! Why not to meet the expectations of the young for the future, opening the wings in these holy places? Another idea of mine is to revive the title of "Sultan", I think it is necessary to assign the title to the prominent, honored workers of arts, education, culture, etc. Currently, men in our society are criticized. In these cases, showing such honor and respect promotes the growth of his authority, the important role as the guardian of the hearth, the statesman. If in ancient times the title of Sultan was given only to the descendants of Genghis Khan, and now we think it is necessary to depart from the framework. 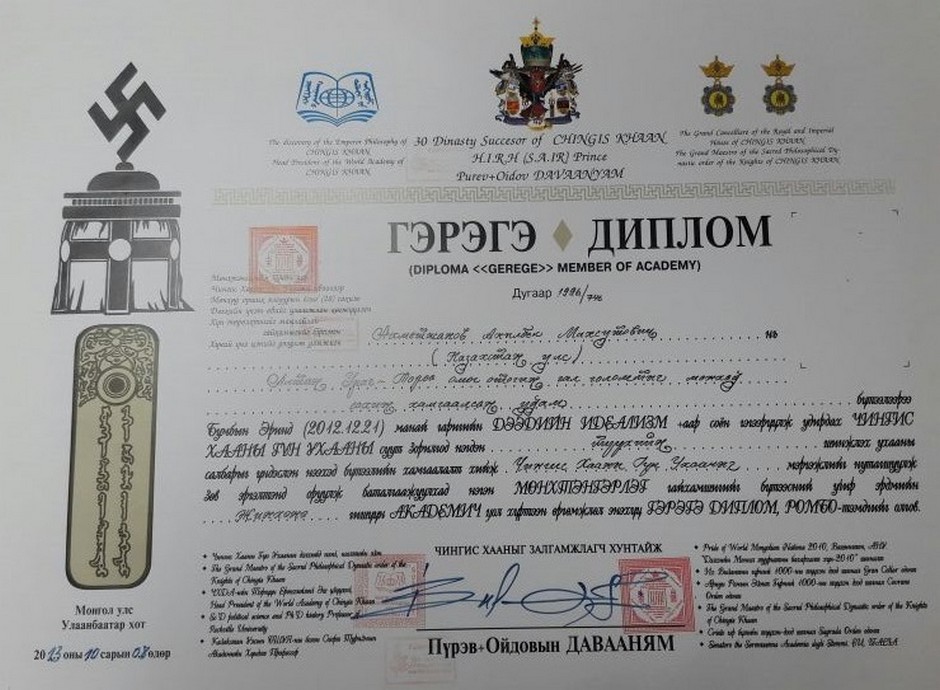 - What is your opinion as the experienced historian of Alasha Khan and his little-known mausoleum?

- To be honest, truth, legend and all sorts of different arguments and assumptions around the mausoleum of Alasha Khan have their proof. I am familiar with the hypotheses presented by them. And if to tell you what I have seen with my own eyes, I was surprised by the power and greatness of the mausoleum, the complexity of architectural structure, and how the inscription of Allah appears on the dome with the sunrise and stays there until it goes down. This can be called the architectural magnificence of the mausoleum Alasha Khan.

- Akylbek aga, do you think to publish your own research in the history?

- To be honest, this idea did not visit me, but I have some thoughts to preserve the historical facts and materials to the young generation and the people. One of these ideas might turn into the publication.

- What are your plans for the future of knowledge about the history?

- Plans for the future are enough, at that moment I am doing the work, which is of great historical significance. It requires a lot of effort, time and money. The time will come and we will tell about this job too. Thank you very much for the interview! We wish to increase the number of people, like you, a soul suffering in the history!

Use of materials for publication, commercial use, or distribution requires written or oral permission from the Board of Editors or the author. Hyperlink to Qazaqstan tarihy portal is necessary. All rights reserved by the Law RK “On author’s rights and related rights”. To request authorization email to mail@e-history.kz or call to (7172) 79 82 06 (ext.111)
Қазақша Русский English
MOST READ
Week Month Year
We need to know the light and dark pages of history - Makhabbat Kozybayeva Symbols of people's hope and dreams Armenians and their kinship with the Kazakh people Remembrance Day for Victims of Political Repression and Famine Nurtas Ondasynov. Kunayev’s Chief Doctors-comrades-in-arms of A. Bukeyhanov Aytys between Suyunbay and Katagan Today is Kazakhstan Police Day
Kenesary Khan is the Last Qazaq Sultan The Second World War: Akmolinsk and its Heroes Northern Qazaqstan is the birthplace of the first domesticated horses “Diwan Lughat al-Turk” or “The Compendium of the Turkic languages” of Mahmoud Kashgari Raymbek batyr is a determined defender of Qazaq interests Ayteke bi is a law expert of the Great Steppe Qazaq poet Kuandyk Shangitbaev: is he equal to Alexander Pushkin? History in Symbols Love and Marriage Story of Sabit and Maryam Gabit Musrepov is a man, who was born under a lucky star Kanysh Satpayev’s faithful Muse Sacred sites of Turkestan

Materials on theme
Separated from their homeland. End of correspondence
In honor of the 100th anniversary since the birthday of Kobikov Khamit: on his son’s tales
Zh. Malibekov: We need to develop the national culture
Marat Absemetov: Kenesary, who fought with 20 Generals