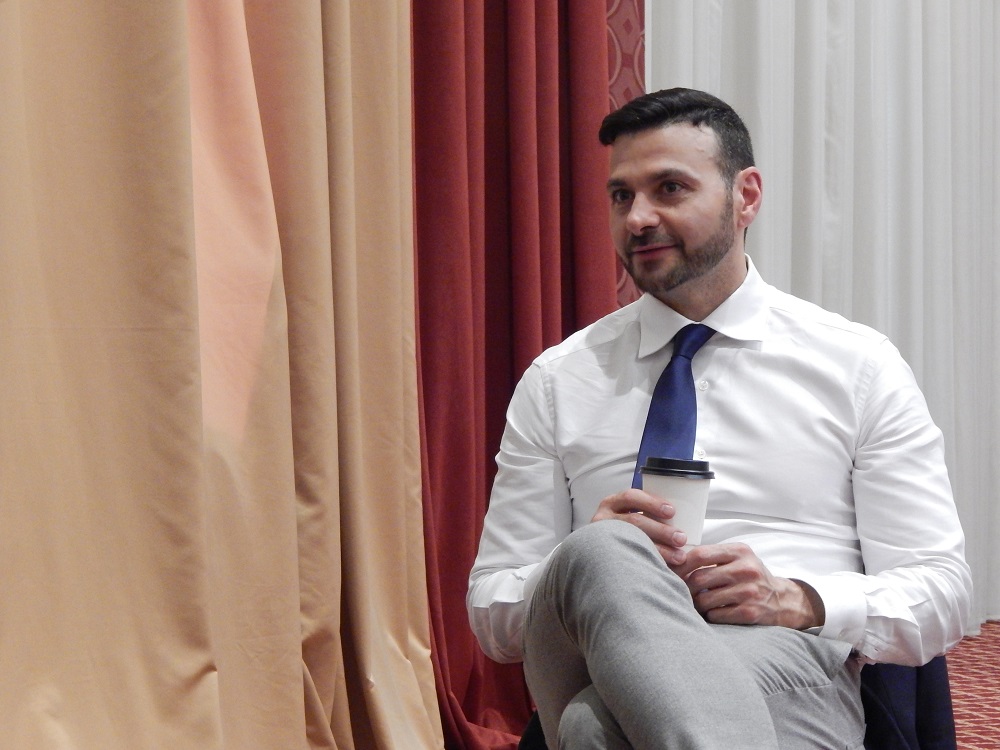 Recently, a presentation of a new world book-bestseller about the architecture and myths of Astana was held. The book is the first foreign work dedicated to Astana

Of course, there are works that tell the whole world of the amazing beauty of the young capital. But the work of Canadian professor, historian, doctor of Cambridge University Frank Albo "Astana: architecture, myth & destiny" is fundamentally different from others, because there are unknown myths and a third-party view. In addition, this work, within the framework of the International Exhibition "EXPO-2017" and on the eve of the Day of the Capital became a huge gift. In this regard, we met with Mr. Frank.

- The first time I arrived here in 2013, Astana amazed me with its beauty. I came on vacation, got a strong impression. I can say that I fell in love with the beauty of the city. This was the first moment that prompted me to write the book. I believe that Astana is a stronghold of peace and tolerance, of religious solidarity.

- Why did you choose Astana, and not Tashkent or Bishkek?

- I did not choose Astana, but Astana chose me (laughs). In the world there is no city like Astana, in spite of the fact that the city is still young, it has its place in the world arena. I was amazed by the architecture of Astana, that is, the harmony of the old and the new, so I decided that I need to share my impressions. It seemed to me that we found each other, I found Astana, Astana found me. The significance of Astana is that it is the only city that meets the three criteria. Firstly, it solves the problems of religious extremism and terrorism, and secondly – it is the city of the future, indicating how the world should live in the future, what to rely on, and thirdly, the rejection of nuclear weapons. The solution of these three problems can be found in Astana. No city in the world can afford these three opportunities at once. 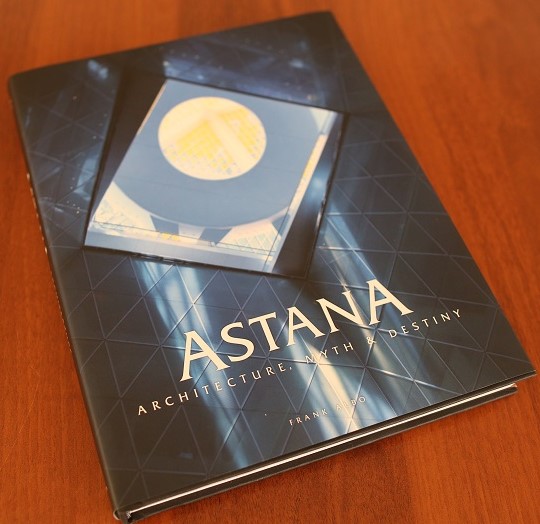 - What other famous works do you have?

- Before that, I published my significant work called “The hermetic code”. The work tells about the famous Canadian House of Government.

- Prior to this, works on Astana were already published, and how is your work different?

- Firstly, I want to say that this is the first work devoted to the capital of Kazakhstan published abroad in English. Here I became more familiar with the architecture of the city, thoroughly studied not only the construction, but also the myths of the history of the city, of which we do not know. Because there are concrete symbols in the architecture of Astana. Each building is unique in its own way, and they are not similar to each other. Each of them has a direct connection with the history of the city, and all of this I tried to indicate in the book in the form of comparative figures. I think that this will be an effective tool in the knowledge of the young city, since I did not just describe the beauty of buildings, but tried to find a connection with myths.

- What myth about Astana we have not heard yet?

- You know the myth about Baiterek, but not everyone knows that the roots of the myth originate from the times of the Sumerian-Akkadian states. This myth is known to us for more than four thousand years. I propose to read and learn about it from the book.

- What architecture surprised you?

- If you look at the city, from the first glance you will see new high-rise buildings, and if you look closely, each of them has its own differences in structure and uniqueness. The most interesting thing is that the past of the city is connected with the present. In many current buildings, one can find a certain connection with the myth. This surprised me. In my work I tried to connect today's buildings with ancient myths, it's amazing, and that’s what the mutual harmony of the past and the present means.

- What sources were used on the work of the book?

- During the collection of information, I read over 400 articles and studies published in Kazakh and foreign publications about Kazakhstan in general and Astana in particular. They are written in different languages. In addition, I came to Astana and conducted research work, because the sources are one, and personally see another thing. It took 3 years to collect data and get acquainted. It should be noted that I, as a professor, have the opportunity to get acquainted with materials not available to the majority, and this helped me a lot. Another feature of mine is that I travel a lot. For example, to see one book about Astana, I specifically went to Princeton. I think that all this is the result of such research and work. 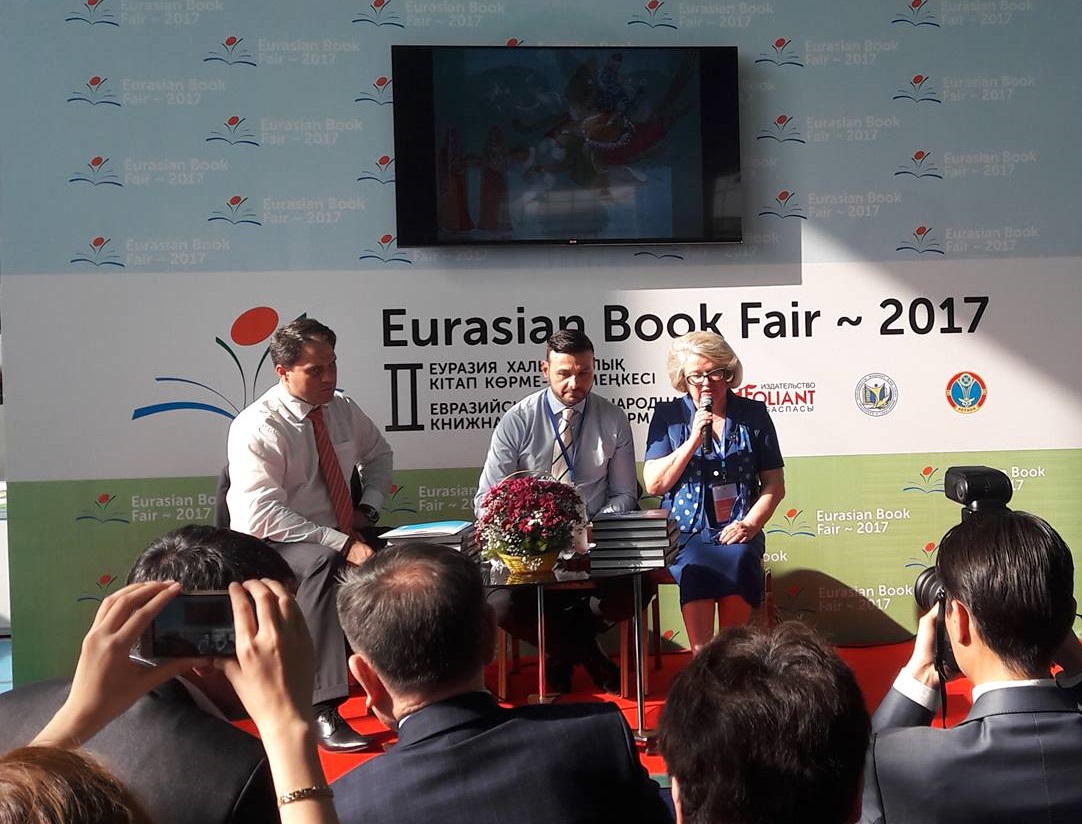 - Being a historian did you study the history of the Kazakhs? What period was especially interesting?

- In my opinion, the period of post-independence of Kazakhstan, because the state has appeared in a short time, this has become a country with a peculiar direction in development. And a striking example is Astana. I can not say that I fully got acquainted with the ancient history of Kazakhstan. I am pleased that Kazakhstan, as a young state, makes a huge contribution to solving many international conflicts. Kazakhstan has become a platform for seeking answers to global issues; these are not my words, but the words of world politicians.

- Concerning the presentations of the book, how did they pass in London, Washington, Ottawa?

- We can say that the presentation of the book was successful, the visitors were surprised. Through Astana they got acquainted with the history of the young Kazakhstan state, many interesting memories were heard. And the most interesting, in Canada, long before the official presentation, all the books published were sold out. The main thing is that foreign readers realized that Astana is the cradle of a future civilization that rocks the heart of Eurasia.

- It is not easy to write a book, and its publication, distribution requires a lot of work, time and money, but how did you do?

- The question is very relevant. First of all, I want to say that during my work on the book, I put all my efforts, because you know when a person does an interesting job for himself, he gives everything with all his heart, I carefully read every material about Astana. Every day, interest in Astana grew. First, the interest in knowledge helped. In addition, the book is not sweat, spilled for a couple of months or even a year, for the knowledge of Astana, I spent as much as 4 years, with each visit, I learned new information about the young city. Of course, it cost me dear, but I can say with certainty that it paid off. As I said before, other my works were published, but for me this work occupies a special place. Colleagues say that I suffered heavy losses, I agree with this, but most importantly, I'm glad that my hopes were justified. If we talk about publishing a book, I have friends who are engaged in publishing, so they extended a helping hand. And most importantly, I am glad that, through making my contribution, I made up for the ranks of materials about Kazakhstan.

- Did you visit the EXPO exhibition? Does the book talk about EXPO?

- Yes, of course, the book says about the EXPO. I have not been to EXPO yet. But I'll definitely go. As for the Expo, I believe that this is an important event for Kazakhstan and for the future of the world, because along with the fact that new discoveries appear within the framework of the exhibition, it is one of the reasons for the rapprochement of states with each other.

- How do you imagine the future of Astana?

- Kazakhstan and the world should consider their future through Astana, because Astana is the city of the future. Speaking specifically, in a short time Astana has become the arena of many important world events. One more proof of my words: world leaders who have visited Astana do not hide their surprise. This is evident from the memories of leaders about Astana.

- What are your plans for the future, what other work should we expect from you on the history of the Kazakhs?

- I can say that this is only one part and the beginning of my work on Kazakhstan. And I dedicated this work to the people of Kazakhstan, of course, and foreign readers through this book can get acquainted not only with the present, but with the past of Astana. I am sure that they will increase their interest in the history of the Kazakhs.