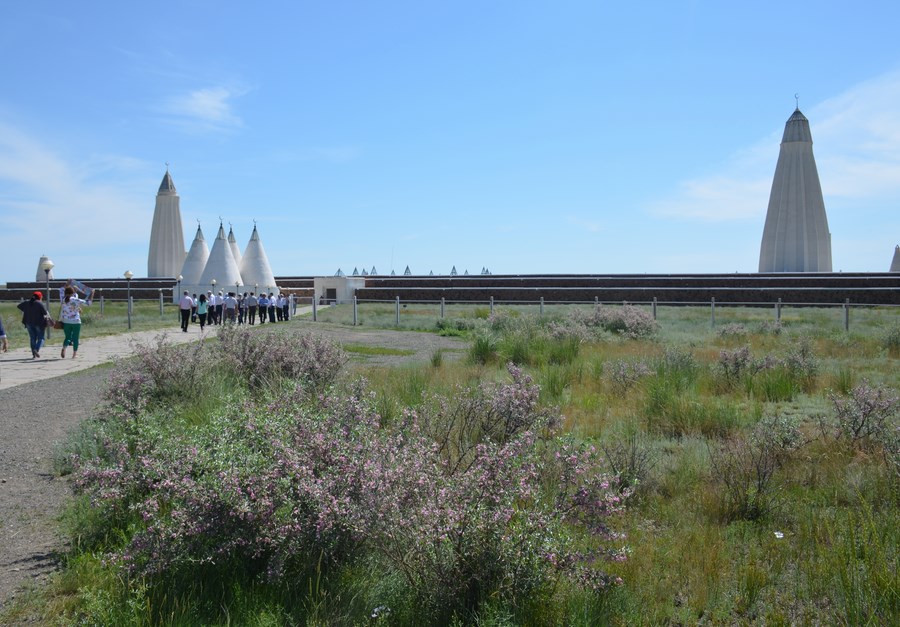 This well became an addition to the ensemble of cultural monuments and the history of the house-museum of Abai, the mausoleum complex of “Abai-Shakarim”, the exposition of “Shakarim Hunting House”, the shrine of “Zere-Ulzhan-Kudaiberdy”, the grave of Yerkezhan, the stone sign of “Center of Eurasia” and others.

The writer Beken Issabayev writes in his article "On the origin of the name of the tract of Zhidebay": "Neither Kengirbay nor Uskenbay, but Qunanbay, having ruled Chingistau completely, began to build wintering there and distribute lands among the tribes. All this happened around the 1830s, when Qunanbay was a governor, then a foreman of the Kuchuk-Tobykty volost." 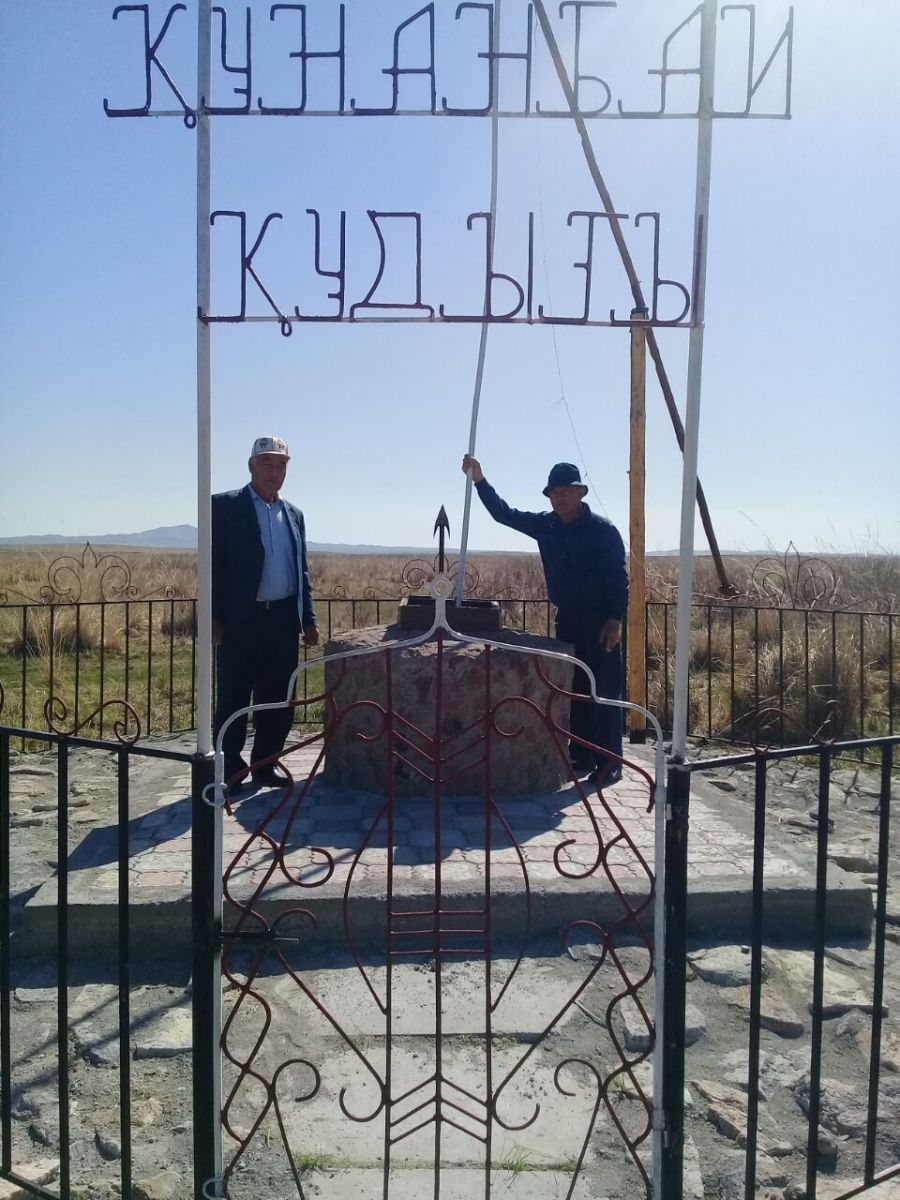 Several wells, the inner walls of which were lined with stones of the mountain Orten were dug exactly in those years near his wintering in Zhidebay. Unfortunately, during the years of Soviet power they were left unattended, they all became worthless. And only in the run-up to the 150th anniversary of Abai Qunanbayev in 1995 was one of these wells cleaned.

And this year with the help of the main huntsman of the reserve "Zhidebay" E. Kuzembayev, one more well of Qunanbay in Zhidebay was restored. This well is fenced with an iron fence; special for the visitors of the reserve a concrete road is laid. Also, the well is laid with a natural stone, a wooden lid and a well crane with a wooden bucket is installed. 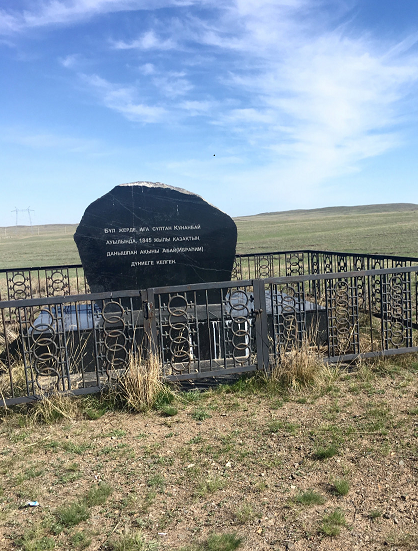 The house-museum of Abai, its arrangement and interior decoration is an example of how in the late 19th century the traditional way of nomadic life changed. The guides say that the design of the house took into account Abai's wishes. For example, in the rooms are installed quite a city furnace. However, to what to be surprised, after all Abai regularly went on affairs to city.

The museum also houses homemade checkers from asyks, which was made by Abai, and also a set of togyz-kumalak. It turns out that this was a real passion of the poet; he was ready to play togyz-kumalak days and nights and even acted as a judge in local competitions in the game, which is sometimes called the shepherd's algebra. But the most unexpected exhibit is Abai's dental prosthesis. 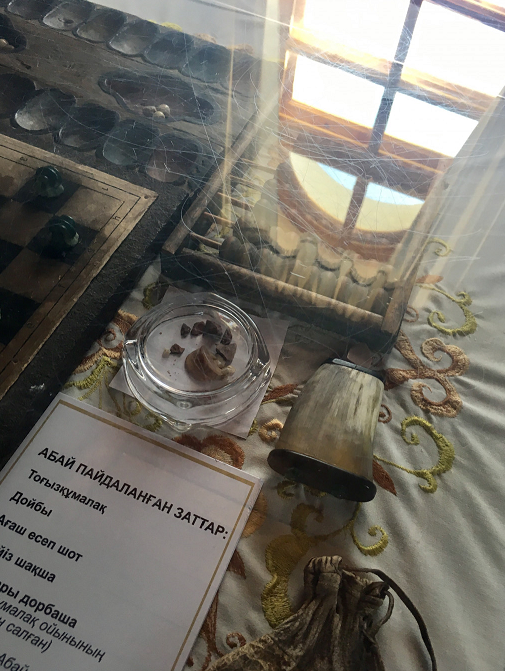 The most impressive object, crowning the reserve-museum, is a huge mausoleum of Abai-Shakarim. Inside there is a memorial plaque, which was established in the 1940s by compatriots and Mukhtar Auezov. The writer, by the way, was Abai's great-nephew.

Here, in the tract of Zhidebay lie the beloved grandmother and mother of Abai – Zere and Ulzhan. Another little-known detail is connected with the poet's grandmother. Judging by the surviving descriptions, she had what is today called a piercing, she went to aul of her groom with an earring in her nose (in those days it was considered an amulet for nomads) and therefore she was given a second name in marriage - Zere (in girlhood she was known as Tokbala). 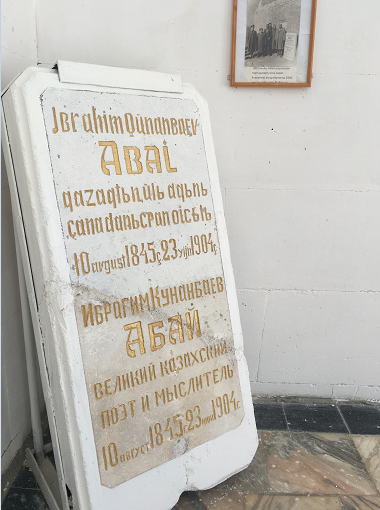 On the memorial plaque of the 1940s, the Kazakh inscription was written in Latin script

Use of materials for publication, commercial use, or distribution requires written or oral permission from the Board of Editors or the author. Hyperlink to Qazaqstan tarihy portal is necessary. All rights reserved by the Law RK “On author’s rights and related rights”. To request authorization email to mail@e-history.kz or call to 8 (7172) 57 60 13 (in - 1163)
Қазақша Русский English
MOST READ
Month Year
Recorded history of Kazakhstan. Part 2
Heroic mothers of the great steppe
How had the World War II been started?
Philosophy of the Emblem
14 monuments at Tekturmas
The rural akims: the country's hope is in the elections
Kazakh historical drama Tomiris premiered in Istanbul
Stolypin about the worries and hopes of immigrants to the Kazakh steppes
ALASH IDEA IS THE PROTECTION OF KAZAKH STATEHOOD
A tireless explorer of the Kazakh land
SWITCHING TO THE LATIN ALPHABET – UNITE ALL KAZAKH PEOPLE
Kunaev Dinmukhamed Akhmedovich
People who eat horses will kill you
Materials on theme
OSCE CONFERENCE IN ASTANA
BELARUS WILL HELP IN STUDYING THE HISTORY OF “ALZHIR” CAMP
International remembrance event “We are millions of Panfilovs”
“Akzhaiyk motives” – love for native land