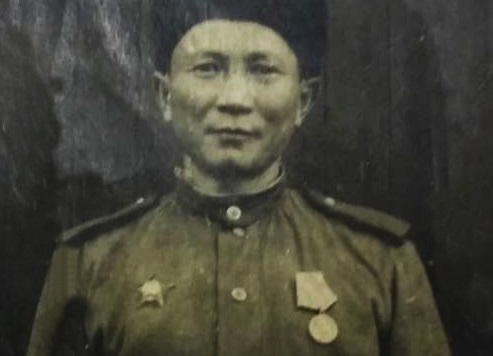 My grandfather - Abish, was a participant in the war. He saw both the victory and the subsequent peaceful life, and in the sweat of his face he worked to restore the war-ravaged economy

It's already 72 years since the war ended, which took the lives of many of our compatriots. On this occasion, I could not but fulfill the request of my mother. Abish Salakbayev was one of many participants in the war. He saw both the victory and the subsequent peaceful life, and in the sweat of his face he worked to restore the war-ravaged economy. With the advent of May, my mother always asked me to write about him, probably it was a longing for my father, reverence.

Grandfather Abish was born in 1910 in the present Tarbagatay district, in the former aul of Maxim Gorky - the current Zhana-aul. It is said that his father Salakbai, who lived in the settlement of Sarykamys of the Tarbagatay district of the East Kazakhstan region, was well-known in the district and engaged in camel husbandry. In Soviet times, when I was in the aul of Sagyndyk, aksakal Magee said that he knew Salakbai and told the following story:

"One day I was looking for my missing horses, and got lost in a thick fog. I went and saw ahead a shoal of camels, but I did not see their owner. I waited for someone to come, but no one came. In the evening camels began to return from grazing, with them, and I went out to someone's house. In the courtyard I saw a golden eagle biting the remains of a camel. I admired this scene, as I was also interested in training birds. The old man came out of the house, greeted me, asked about my affairs. I told my situation, he invited me into the house. And so that's the whole evening, your grandfather and I talked. He showed cordiality, despite the fact that I was young."

From these words it is clear that my grandfather was a very respected person. And grew up in such an environment, no doubt was a patriot of his country. Having two classes of education, he worked as a collective farmer-foreman before the war in the collective farm Kyzyl Asker. 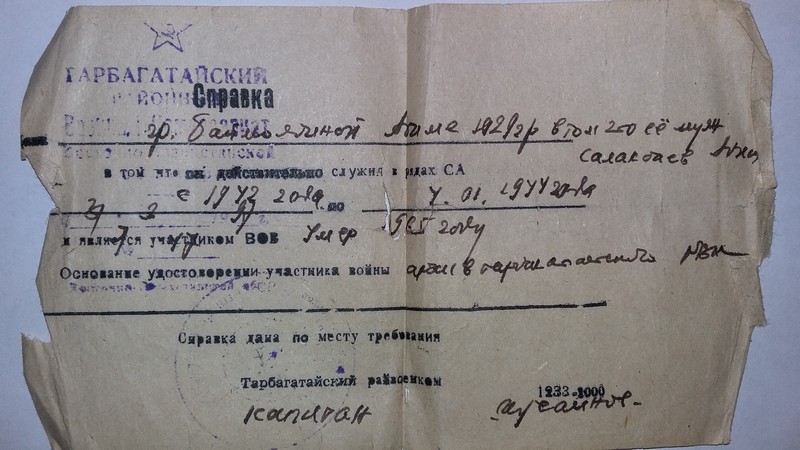 In January 1942, he was drafted into the army by mobilization. In a certificate issued by Tarbagatay military registration and enlistment office to my grandmother Baimoldina Atiman, it is confirmed that Salakbayev Abish served in the Soviet Army in 1942-1944 and participated in the Great Patriotic War, and stated that he died in 1965. According to the Red Army soldier’s book, he fought as part of the 144th anti-tank artillery unit. In 1942, he took part in operations near Stalingrad, in 1943 in Smolensk, Vitebsk, in 1944 in Belarus, in East Prussia, in 1945 in Pomerania, on October 11, 1943, for the heroism shown during the defense of Stalingrad was awarded the medal "For Courage" and August 9, 1944 for the special heroism he was awarded the Order "Red Star". As you know, the Battle of Stalingrad is one of the most important battles during the Great Patriotic War. 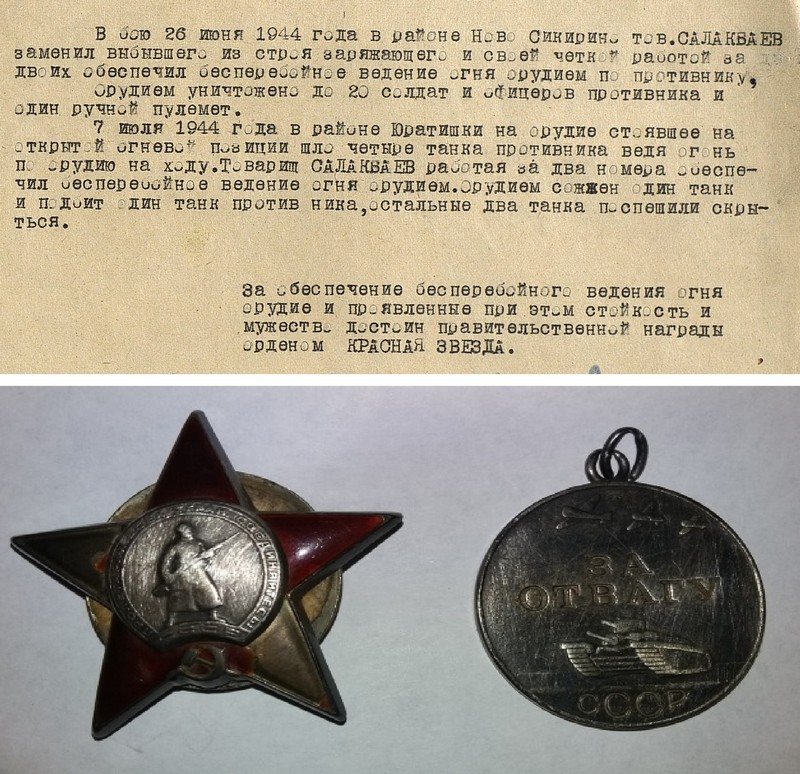 Participation of the grandfather in this battle is a pride and an example of patriotism for his descendants. When I asked my grandmother what kind of memories grandfather told about the war, she answered shortly:

"Your late grandfather did not talk much about the war, only said that he reached Berlin."

Perhaps she is right, because in the book of the Red Army soldier - my grandfather there are records confirming his participation in operations in Poland. Grandmother had one valuable relic of my grandfather - front-line soldier - a large German silver spoon, which she kept until the last days, then handed it to us. From the two sons of grandfather Abish, there are now four grandsons and five great-grandchildren.

Let the soul of the grandfather rest in peace!

Use of materials for publication, commercial use, or distribution requires written or oral permission from the Board of Editors or the author. Hyperlink to Qazaqstan tarihy portal is necessary. All rights reserved by the Law RK “On author’s rights and related rights”. To request authorization email to mail@e-history.kz or call to 8 (7172) 57 60 13 (in - 1163)
Қазақша Русский English
MOST READ
Month Year
Kazakh historical drama Tomiris premiered in Istanbul
ALASH IDEA IS THE PROTECTION OF KAZAKH STATEHOOD
Stolypin about the worries and hopes of immigrants to the Kazakh steppes
A tireless explorer of the Kazakh land
SWITCHING TO THE LATIN ALPHABET – UNITE ALL KAZAKH PEOPLE
Kunaev Dinmukhamed Akhmedovich
People who eat horses will kill you
Kazakhstan's participation in the Winter Olympics has a long history
Rebooting a field of science and education
Recorded history of Kazakhstan. Part 1
Historical Dates on the Bosphorus
Recorded history of Kazakhstan. Part 2
Materials on theme
About Kanysh Satpayev’s life path
Where the law is strict, everyone is smart
When Ancestors' Dream Came True
From Kamyskala to Kyzylorda