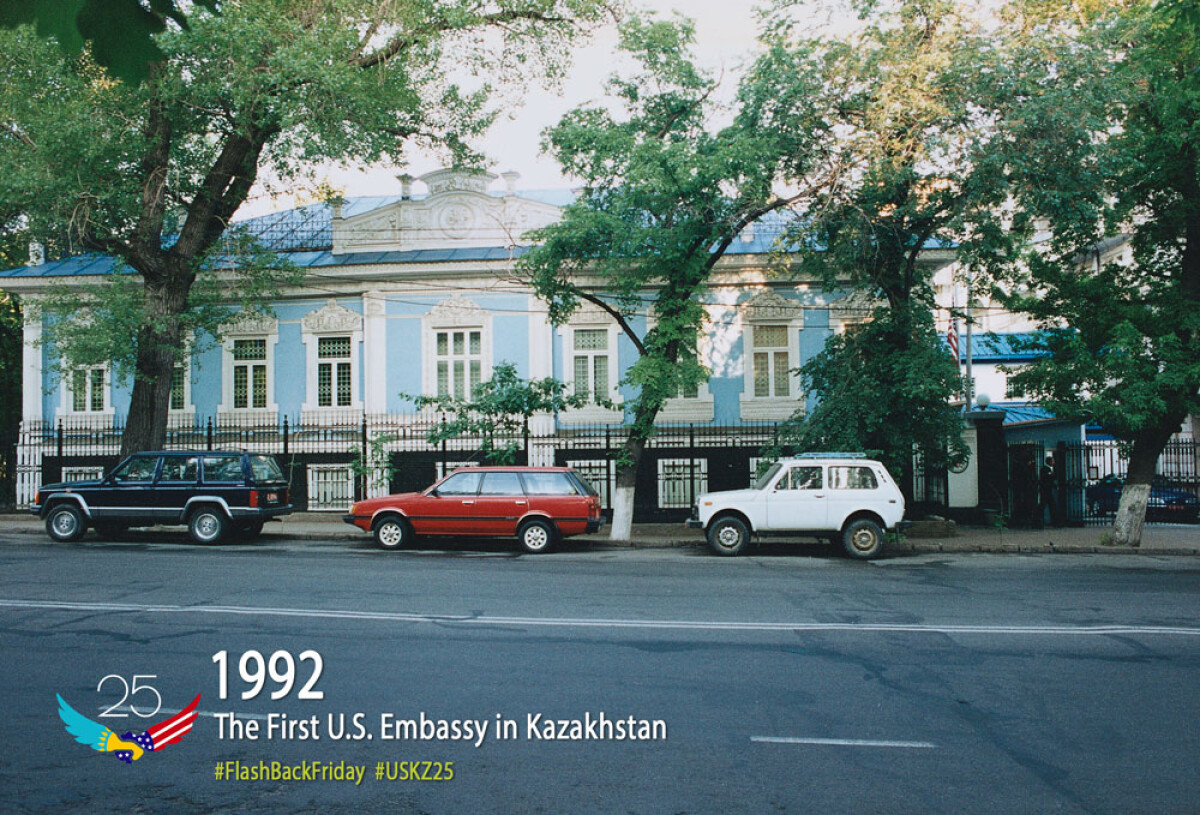 25 years ago, Alma-Ata, as the capital of sovereign Kazakhstan, began to accept and place the first diplomatic missions. How it happened, read in the material

Yellowed pages of "Kazakhstanskaya Pravda" every time offer us surprises in the form of interesting news, reports or interviews. This time, in its issue as of 16 January 1991 under the heading "Urgent" was posted a small size, but of much value the note: "diplomatic corps came".

The diplomatic staff of the future US and Turkish consulates arrived in Alma-Ata. It became known from sources were close to the official. However, while the diplomats live in the best hotel "Dostyk", then they will move to the capital buildings on Kirov-Seifullin and Komsomol-Lenin streets. 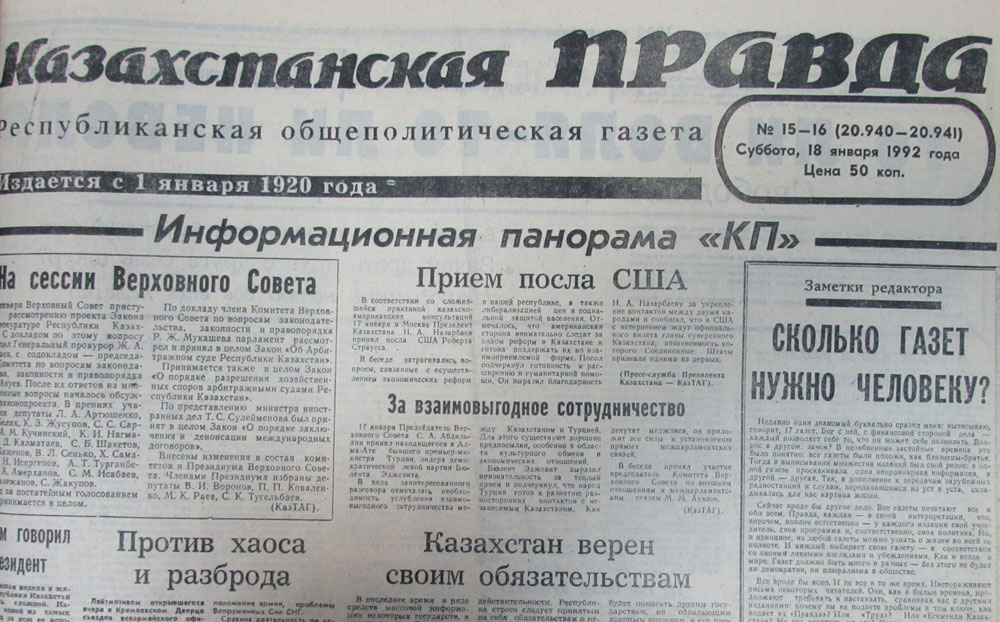 The next step is the arrival of the German consulate employees. All in all, by March (1992 - auth.) six flags of foreign powers will be flying in different parts of our city.

And yet problems solved. It is said that 60 hectares in the city was sought or allocated to 60 offices. Local authorities, or rather the Kazakh side, would create a "diplomatic town" by putting all the diplomats in the neighborhood. However, foreigners are intractable. They want all alone and in the original buildings. And, even insist, that would bring with them the staff. But they certainly know better. A man is the king in his house.

One question that they did not want to comment was left open: if the Republic of Kazakhstan is free and independent state, then why is not open embassies?

The question of the journalist appeared rhetorical. George Bush Senior in December 1991 wrote to President Nursultan Nazarbayev on the recognition of the sovereignty of the republic and the need for early establishment of diplomatic relations.

February 3, 1992 US Embassy was opened in Alma-Ata, and the event was reflected in the first page of the "Kazakhstanskaya Pravda" in the article "The Americans, as always, are first!" 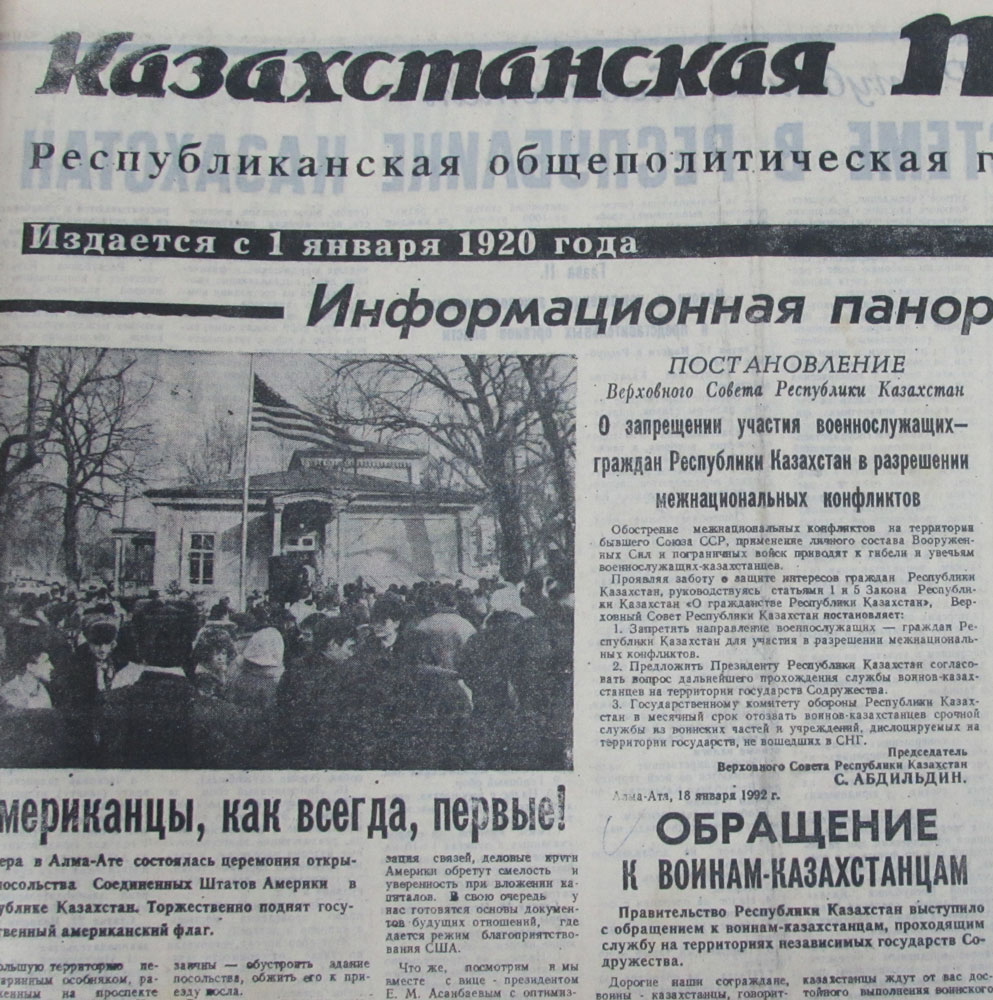 In Almaty, the opening ceremony of the US Embassy in the Republic of Kazakhstan was held. The national flag was solemnly hoisted. A small area in front of an old mansion, located on Seifullin Avenue (Kirov street corner), was filled by the citizens and guests of the capital. Well, first embassy in the independent state - a historic event, a remarkable act, worthy of special attention of journalists, which, incidentally, were no less than the guests. The first swallow, which, as you know, makes the weather, arrived. Behind it they wait others in Almaty.

US Chargé d'affaires in the Republic of Kazakhstan Jackson McDonald addressed the audience with warm and friendly words. Congratulating the citizens of a sovereign state since independence, he assured - the embassy staff will continue the development of good friendly relations among nations and peoples. Opening of the US Embassy they regard as a significant step in the development of international relations.

As for the problems of today, they are unambiguous - to equip the embassy building, to inhabit it for the arrival of the ambassador.

The opening ceremony of the US Embassy was attended by Vice-President of the Republic E.M. Asanbayev, Prime Minister S.A. Tereshchenko, Mayor Z. Nurkadilov and other officials.

The Embassy opening the vice-president E.M. Asanbayev called act of historical importance. He appreciated the support of the US administration, President Bush and State Secretary Baker entering of Kazakhstan into the world community.

Kazakhstan hopes that the opening of the embassy will activate ties; America's business community will gain courage and confidence when investing capital.

Then, on the flagpole soared Stars and Stripes US flag. The sounds and words of the American national anthem drowned in the noise of machinery. Arrived embassy officials sang, American students and journalists, employees of the joint Kazakh-American enterprise "Senim". Finally, all those who participated in the opening ceremony, were invited guests to "a la fourchette". 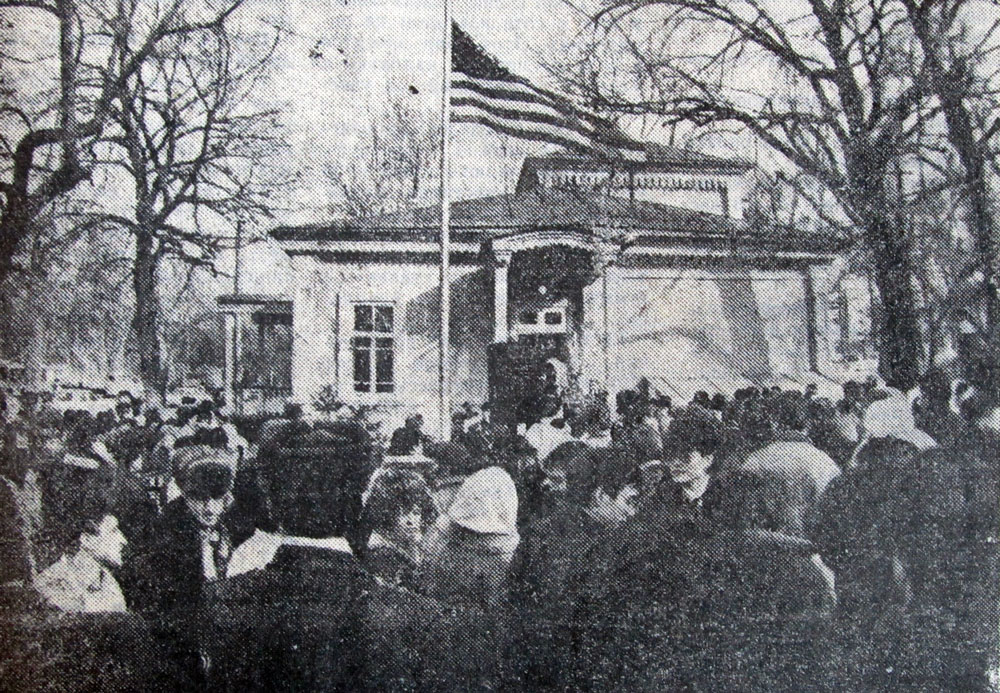 But the history of the discovery of the first in the history of sovereign Kazakhstan diplomatic mission - the US Embassy in Almaty, also had its nuances, which not many people know. The President of Kazakhstan archive remained diplomatic correspondence with the American side, which reveals some of the secrets. Even then, US officials made clear that the building on Seifullin street they regarded as a temporary solution, and subsequently, when the embassy would get larger premises, in the above building House of America would place. It was important for the United States that America's House was located in the center of the city and would be available for anyone interested in history, culture and life of the American people.

This approach found understanding from the Kazakh side and US officials, including Ambassador William Courtney, received repeated assurances from the Office of the President of Kazakhstan employees that building on Seifullin street would be given to the House of America. But the administration of Almaty decided to transfer the building on Seifullin street for Representative IOC (International Olympic Committee). 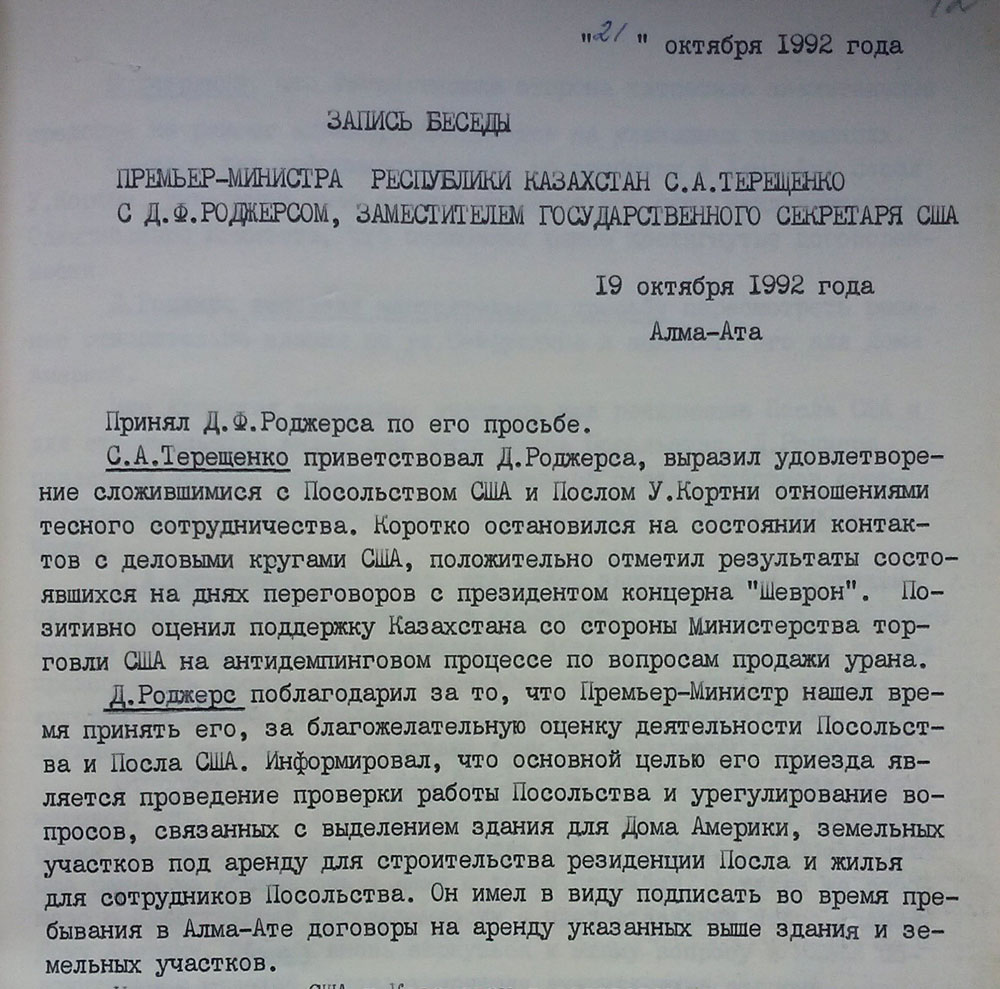 October 19, 1992 was held a meeting of the Prime Minister S.A. Tereshchenko with Deputy State Secretary D.F. Rogers, who came to check the operation of the US Embassy. The main purpose of the visit was to resolve issues related to the allocation of a building for the House of America, land plots for rent for the construction of the Ambassador's residence and housing for employees of the Embassy. D. Rogers expressed the urgent request for the withdrawal of land for construction of housing for employees of the Embassy in the area of the streets K. Marx - Vinogradov and along the road to Medeo.

S.A. Tereschenko explained that the removal of the requested land was impossible, because it had already set aside to other republican organizations. The Kazakh side is ready to provide land to the US Embassy in other areas that meet all the requirements.

In parallel, S.A. Tereshchenko raised the issue of the provision of the US Government in order to facilitate the necessary reciprocity in the opening of the Embassy of Kazakhstan in Washington. D. Rogers said that the US government is ready to contribute fully to the early opening of the Embassy of Kazakhstan. For example, the US government would open an account in Washington and transfer to this account currency funds owed to Kazakhstan for leased by the US Embassy in Almaty premises.

So fast and not always smooth was formation of diplomatic relations between Kazakhstan and the United States in the early years of independence.