Nazarbayev’s way was not silky 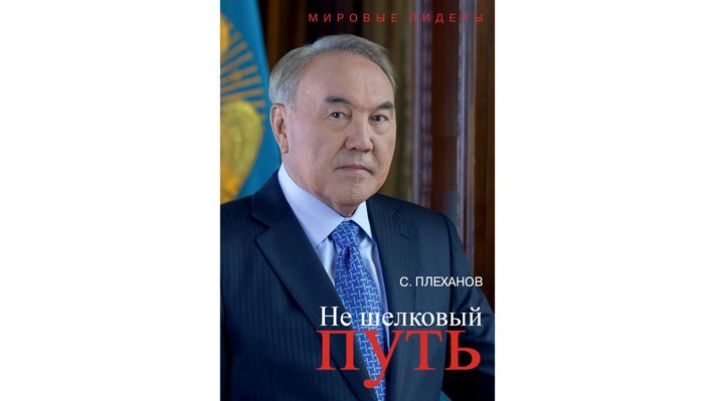 Formation of the First President of independent Kazakhstan was carried within the framework of the Soviet Union collapse and birth of new independent states.

Differing from the majority of reformists of the period of perestroika (reorganization), Nazarbayev since the very start aimed not at the destruction, but at the creation. The closing of Semipalatinsk nuclear polygon and active role of Nazarbayev in international peace-making initiatives made him a famous and authoritative political activist of the contemporaries.

Sergey Plekhanov is famous with his works-researches and activity of many outstanding politicians of the contemporary world. With the book “Neshelkovyi putj” was opened the thematic series “World leaders”. The author worked at it over 15 years, went around the whole Kazakhstan, visited the places of childhood, youth of the main character, talked to his close people, assistants, met many times with the President.

It’s not extra to remind the words of the head of the MFA RF Sergey Lavrov, “From the book it is possible to know Nazarbayev’s life path was far from silky. It is interesting and educative for many acting and fresh politicians to get to know how various obstacles on this way were overcome thanks to the only cause: always whatever Nursultan Nazarbayev did, he thought of his people”. On the eve of the 25th anniversary we suggest to remember the fact how the happenings developed after August coup 1991, what about N.Nazarbayev worried, what decisions he made.

The menu for the feats of winners

(Extract from the book)

After the KPSS dissolution N.Nazarbayev developed clear presentation of what was ahead of Kazakhstan and the whole Union. Being at that time Chairman of the State Committee of the Kazakh SSR on culture Kanat Saudabayev reflects on the following: “23 August I was invited by N.Nazarbayev. Without long prefaces Nursultan Abishevich said: “Currently with Moscow we will have completely different relations. There will not be a party, and the Soviet Union will disappear soon as well. That’s why in Moscow the Plenipotentiary Representation of the Kazakh SSR in the USSR will open – factually our first embassy. If you are not against, I will sign the Decree about your designation as the Plenipotentiary Representative”.

16 September Nursultan Abishevich presented me in this regard to M.Gorbachev, who bitterly made a joke that it is the second Political Science Teacher in the history of country after Podvoisky”.

In the meantime, the events went on progressively. The Ukraine proclaimed its Independence. Declared about self- dissolution the Congress of peoples’ deputies of the USSR. Once again, the preparation of the Union Treaty.

The further, the more obvious it became: Gorbachev’s days were numbered. Nazarbayev realized that things are coming to the collapse of the Union and at the agenda – full independence of Kazakhstan. He declared on the necessity to immediately start the formation of own golden reserve of the republic. As well as other republics, Kazakhstan turned to the UN for the recognition it as a sovereign republic. Though, delivering speech on 26 August at the sitting of the Supreme Union of the USSR, President of Kazakhstan also told about Union Treaty, his understanding of interunion relations became rather differing from that told by him before, “We suggest the entry into Confederation Treaty. I am convinced that we will achieve true equivalence of the republics.

Perhaps only through that we will reach true federation, in that I am assured. By the way, I want to note that Novogarev Treaty is almost confederative. So, let’s honestly recognize and put, at last, everything at their places. The entry into non-economic treaty can be realized only in stable and calm circumstances and only with those republics, that fully guarantee human rights and trusts each other”. In the after-coup period Nazarbayev’s influence on all union affairs became significant, he turned into real political heavyweight.

Thus, exactly Nazarbayev on the empowerment of the President of the Soviet Union proclaimed at the Extraordinary (and last) Congress of people’s deputies of the USSR the declaration of the united president and superior heads of the republics, in which were given principles of the existence of the state for the transition period. 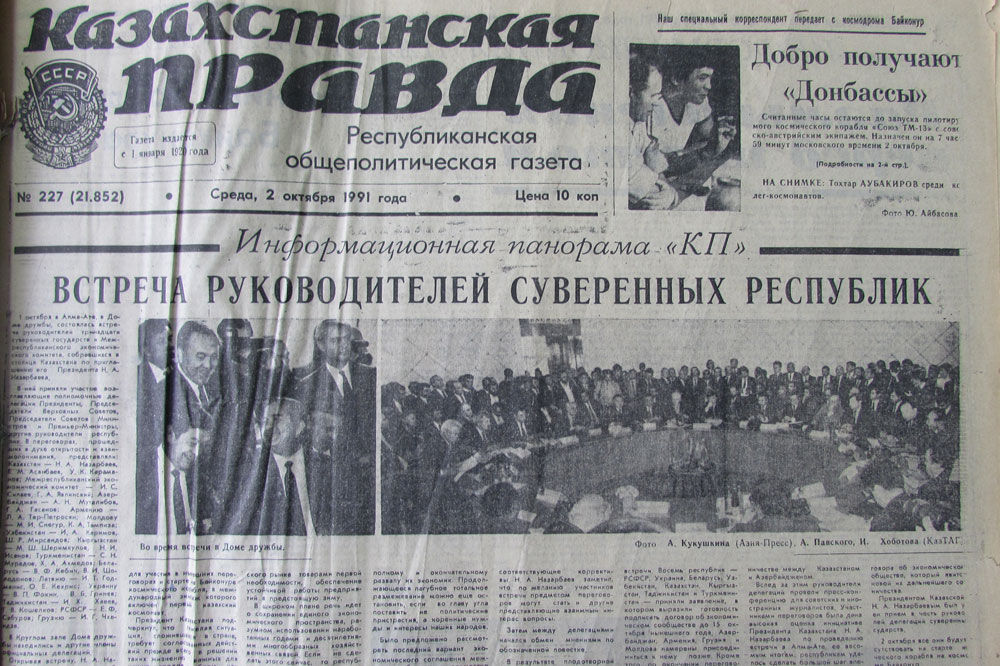 According to Nazarbayev’s initiative 1 October in Alma-Ata opened the meeting of the heads of sovereign states,  still being de-facto in the Union where it was planned to sign the Economic agreement among republics, it had to change the Union treaty actually – in any case that case was understood like that by Eltsyn who consequently took the remnants of powers and authority from Gorbachev.

Father of perestroika was startled, on the eve of the evening he called the president of Kazakhstan:

-If you are accepting such project, Nursultan, do it yourself… I didn’t have doubts in you. Perhaps to put question the following way: How does the Economic agreement relate to the political union? During the week to rework, sign, then to ratify by seven-eight states. The Union market will be formed, others will have to deal with this very Union.

It is important for us to disclose the problem who pulls where and decide. Boris Nikolaevich said, the Union Treaty is the case of months. Nazarbayev calmed him by saying that he stands for the nearest signing of the Union Treaty.

But alone he could not surely become the guarantee of it. And leverage Gorbachev had not so many bargaining chips on Eltsyn. 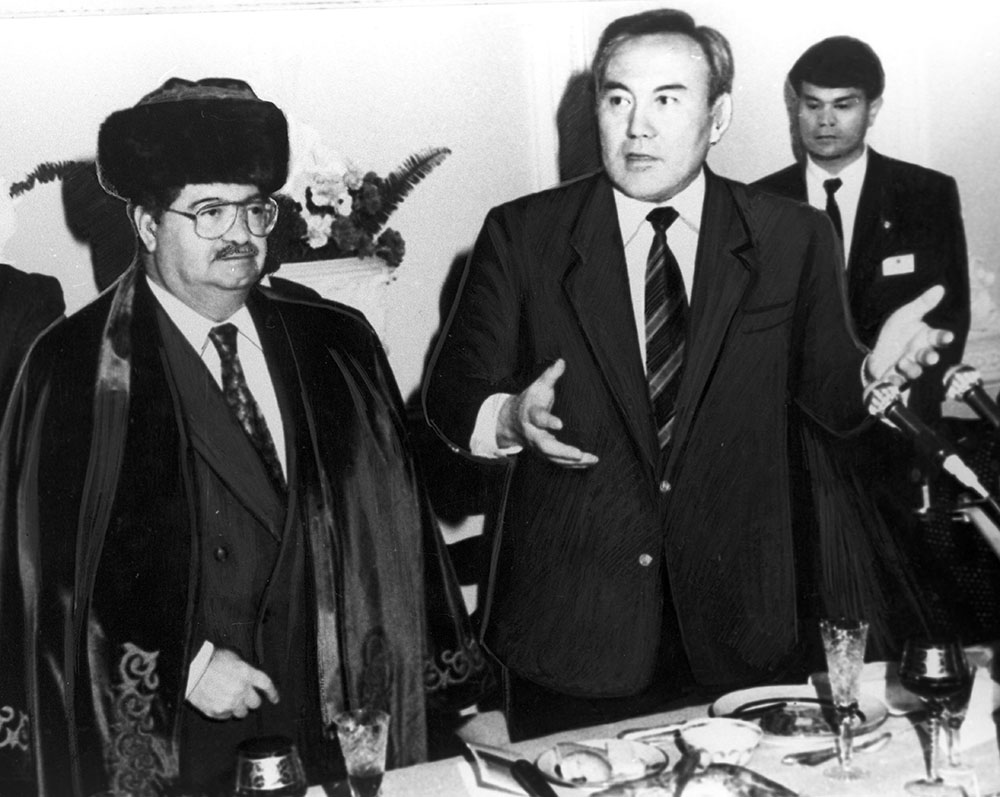 Meanwhile, Kazakhstan with confidence declared about itself at the international arena. Even in early 1991 the president of Turkey Turgut Ozal visited the republic on the invitation of Nazarbayev. Such powers to realize foreign political relations not counting union powers - no USSR subject earlier had.

During his trips around world countries the president of Kazakhstan formed direct relations with many top politicians – the USA president Bush, Prime Minister of Great Britain John Major, president of South Korea Ro De U, patriarch of Singapore policy Lee Kuan Yew, during the visit to China were conducted the negotiations and signed a number of agreements with PRC heads.

Nazarbayev and Eltsyn visited the Nagorny Karabakh, where he spoke out with the initiative of the negotiations on the regulation of Armenian-Azerbaijan conflict.

Thus, the presidents of two most influential republics took the functions of the ruined union center.

Author: Arman Suleimenov
Use of materials for publication, commercial use, or distribution requires written or oral permission from the Board of Editors or the author. Hyperlink to Qazaqstan tarihy portal is necessary. All rights reserved by the Law RK “On author’s rights and related rights”. To request authorization email to mail@e-history.kz or call to 8 (7172) 57 60 13 (in - 1163)
Қазақша Русский English
MOST READ
Month Year
Burial mounds of the southwestern part of the Semirechye region
Union of the Archives and Library
The referendum on the Constitution is a significant stage of democratization
Heroic mothers of the great steppe
Philosophy of the Emblem
14 monuments at Tekturmas
The rural akims: the country's hope is in the elections
Kazakh historical drama Tomiris premiered in Istanbul
Stolypin about the worries and hopes of immigrants to the Kazakh steppes
ALASH IDEA IS THE PROTECTION OF KAZAKH STATEHOOD
A tireless explorer of the Kazakh land
SWITCHING TO THE LATIN ALPHABET – UNITE ALL KAZAKH PEOPLE
Kunaev Dinmukhamed Akhmedovich
People who eat horses will kill you
Kazakhstan's participation in the Winter Olympics has a long history
Materials on theme
Turkestan Autonomy and legends about Mustafa Shokay
20th anniversary of seven priorities’ strategy
Tengrism philosophy of Genghis Khan
Nursultan Nazarbayev and Kazakhstan model of world and accord