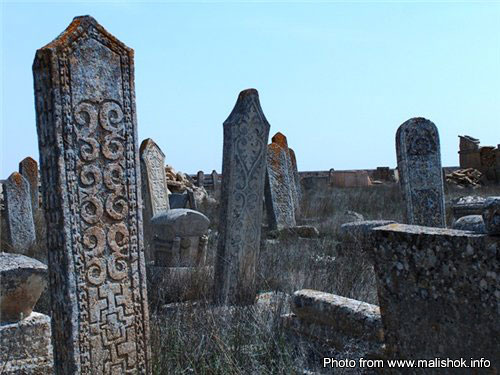 This settlement is the only underground mosque of the XIII century, completely located underground

Karaman-Ata monument is located in the central part of Mangystau, it consists of three parts. These are a corridor, prayer hall and globe-shaped room, in which according to legend is a crypt of Karaman-Ata. Legend has it that Karaman-Ata was brother of Shopan-Ata. Once upon a time there was underground road which connected the two mosques, but it failed over time. M. Mendikulov considers the construction of the mosque Karaman-Ata to the XIII century. Abilgazy says Karaman-Ata - one of the beks, who drove the Turkmen from the Balkan to Mangystau. Let's take a closer look at the legend of Karaman-Ata.

Karaman-Ata was one of the three hundred missionaries who came to Mangyshlak to spread Sufism. Legends of different peoples have different information about Karaman-Ata.

The book of M. Mirzoev mentioned Karakalpak legends, which described the one-eyed ogre Karaman, who was tricked and killed by batyrYesim. 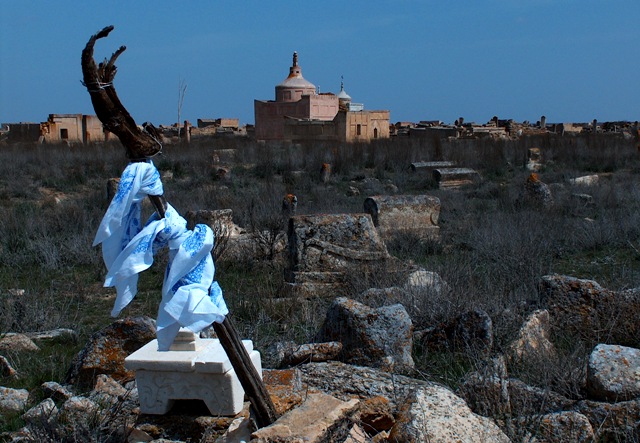 In another Karakalpak legend Karaman - an evil and greedy bay, damned for libel and defamation of Khoja Akhmed Yassawi and sheikh turned him to cannibal dog. The name "Karaman" is found in the Turkmen legend: in ancient times the two brothers Akmanand Karaman lived among Turkmen. They were of great respect and esteem among the villagers. Something caused a great quarrel of the brothers with Khoja Yassawi. And the brothers were forced to move with all their tribe-samyrs west in Mangystau. After the death of one of the brothers, necropolis and underground mosquewas erected

And other information of the middle of the XIX century "Aday legendsof the saints, lived and died in Mangyshlak" was preserved. In these legends Karaman-Ata was the son of Ihsan (Esen-Ata) and grandson of Chopan Ata (Shopan-Ata). He was all over like his grandfather, worked many miracles, and built a mosque in a day's journey from the grave of Shopan-ata. After the death Karaman-Ata was buried near the mosque. However, where it is still unknown. The mosque Karaman-Ata is highly revered. All from whom the pure oath is required, swear there naming their saints. It happened that false sworn naming Karaman-Ata died immediately, and their generation wouldsoon cease to exist. Nowadays survived the local people legendthat once, between the two clans, that roamed on Mangyshlak, there was a dispute on one very important

matter. To resolve the dispute a hundred people from each side agreed to take the oath at the grave of Karaman-Ata. One side, that was wrong, took the oath, too. After perjury,the participants of wrong side attempted to move a hundred paces from the curse of the place, and ride horses to go home. Suddenly they heard the thunder, like a gun shot. Their faces were darkened, and a hundred fell dead off horses.

The most famous in people following legend: once argued among themselves Turkmen and Kazakh people. In order to end the dispute in peace, they decided to get Becket-ata involved in it. Becket-ata offered to make the dispute at the grave of Karaman-Ata. From this case, we can conclude what a sacred place occurred to be the grave Karaman-Ata. 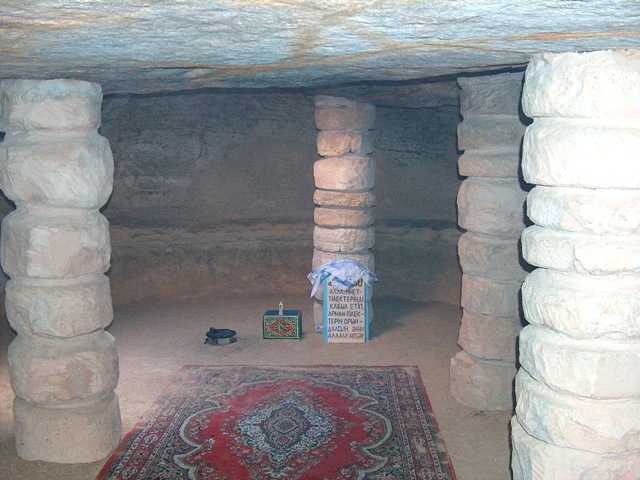 Currently, the bulk of the graveKaraman-Ata is fenced. The area of ​​the grave is 4 hectares. On the southwestern slope of the grave are located tombstones without barriers related to VIII-IX centuries.Their number - 40 pieces.The total area of ​​protected territory - 7.2 hectares. Currently Karaman-Ata monument is protected by law as a cultural heritage including historical monuments.