CHORDS of "Parade of Sovereignties" 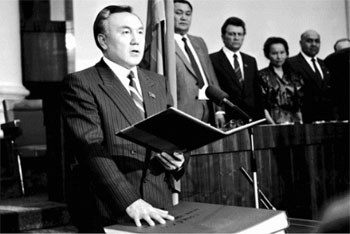 October 25, 1990 the "Declaration of State Sovereignty of the Kazakh SSR" was adopted

Discussion of the Declaration draft was stormy. As a result, the "Declaration of State Sovereignty of the Kazakh SSR" was adopted on 25 October 1990 and in November 1990 on its basis - the Law "On the improvement of state power and governance structures in the Kazakh SSR". 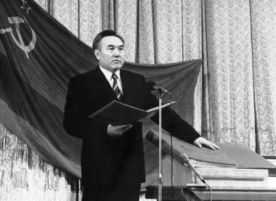 The Declaration of October 25, 1990 the indivisibility and inviolability of the territory of Kazakhstan was fixed, the country was defined as a subject of international law. Announcement of the exclusive property of the Republic of all natural resources, economic and scientific-technical potential allowed Kazakhstan to pursue an independent economic policy. The first, declaration renounced the class approach to the definition of the social basis of the state and declared national character of statehood. The Declaration was the basic underlying legislative act that started the stage of further development of the state and legal system of the country by way of registration of full independence. 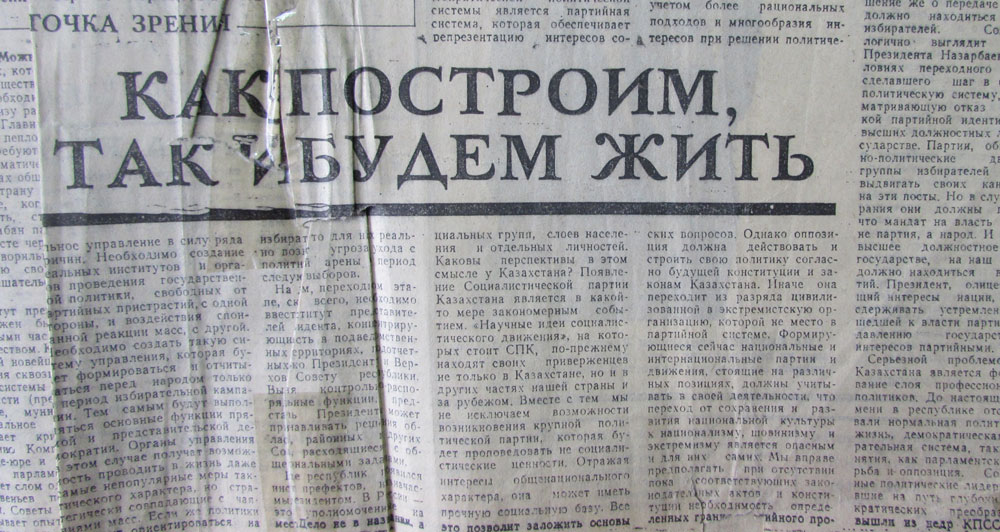 The historical significance of the "Declaration of State Sovereignty of the Kazakh Soviet Socialist Republic" is that it gave real content of state sovereignty of the Republic, recalled Kazakhstan own statehood, which had a long history, emphasized the principle of territorial integrity and declared the system of separation of powers, an essential principle of the Republic functioning as a democratic and legal state.

Here are some excerpts of this historic document

Declaration of State Sovereignty of the Kazakh Soviet Socialist Republic

The Supreme Council of the Kazakh Soviet Socialist Republic, expressing the will of the people of Kazakhstan, aiming at the creation of decent and equal living conditions for all citizens of the Republic, consider the primary task of the consolidation and strengthening of friendship between the peoples living in the country, Recognizing the Universal Declaration of Human Rights and the right of nations to self-determination, aware of the responsibility for the fate of the Kazakh nation, based on the determination of the creation of humane democratic legal state, proclaimed the sovereignty of the Kazakh Soviet Socialist Republic and adopts the present Declaration.

1. The Kazakh Soviet Socialist Republic is a sovereign state which voluntarily merged with other republics of the Union of Sovereign Republics and build relationships with them on a contractual basis. Kazakh SSR reserves the right to withdraw from the Union.

2. Kazakh SSR adopts the conservation, protection and strengthening of national statehood. The revival and development of indigenous culture, traditions, language, and national dignity of the Kazakh nation and other nationalities living in Kazakhstan is one of the most important tasks of the state of the Kazakh SSR.

3. The territory of the Kazakh Soviet Socialist Republic within the existing boundaries is inviolable and indivisible and can not be used without consent. Any violence against the constitutional order of the Kazakh SSR, public incitement to violation of the integrity of its territory, as well as inciting ethnic hatred on the part of political parties, public organizations, mass organizations, and other groups or individuals prosecuted.

4. Citizens of all nationalities constitute the people of Kazakhstan, and it is the sole bearer of sovereignty and source of state power in the Kazakh SSR, exercises state authority, both directly and through representative bodies on the basis of the Constitution of the Kazakh SSR. The right to speak on behalf of all the people of the Republic belongs to the Supreme Council of the Kazakh SSR.

5. Kazakh SSR has its own citizenship and guarantees each citizen the right to the preservation of the USSR citizenship. Citizens residing in the territory of the Republic are guaranteed all the rights and freedoms provided by the Constitution of the USSR and the Constitution of the Kazakh SSR, irrespective of their nationality and political affiliation, origin, social or property status, sex, religion, occupation, place of residence. Encroachment on the civil and national equality is punishable by law. Kazakh SSR guarantees the social, political and religious organizations, mass movements operating in the Kazakh SSR, different legal opportunities to participate in public and social life. Kazakh SSR regulates the migration processes in the Republic, between the Republic and other republics.

6. State power of the Kazakh SSR has supremacy, independence, completeness within the Republic, as well as in external relations in the framework defined by the Union treaty. Kazakh SSR independently solves all issues related to the political, economic, social and national-cultural development in the Republic, its administrative-territorial unit, determines the structure and competence of the state authority and administration, as well as symbols of the republic. <...>

Author: Arman Suleimenov
Use of materials for publication, commercial use, or distribution requires written or oral permission from the Board of Editors or the author. Hyperlink to Qazaqstan tarihy portal is necessary. All rights reserved by the Law RK “On author’s rights and related rights”. To request authorization email to mail@e-history.kz or call to 8 (7172) 57 60 13 (in - 1163)
Қазақша Русский English
MOST READ
Month Year
Burial mounds of the southwestern part of the Semirechye region
Union of the Archives and Library
The referendum on the Constitution is a significant stage of democratization
Heroic mothers of the great steppe
Philosophy of the Emblem
14 monuments at Tekturmas
The rural akims: the country's hope is in the elections
Kazakh historical drama Tomiris premiered in Istanbul
Stolypin about the worries and hopes of immigrants to the Kazakh steppes
ALASH IDEA IS THE PROTECTION OF KAZAKH STATEHOOD
A tireless explorer of the Kazakh land
SWITCHING TO THE LATIN ALPHABET – UNITE ALL KAZAKH PEOPLE
Kunaev Dinmukhamed Akhmedovich
People who eat horses will kill you
Kazakhstan's participation in the Winter Olympics has a long history
Materials on theme
Did the Qazaqs participate in the Patriotic War of 1812 in Russia?
MAIN ARTERY OF INTERRELATIONSHIP
As Akmola was restored
“Akyn Tarazi” – “Poet Taras”