The capital of Kazakhstan has undergone a number of changes in the historical development starting from the status, population, frequent renaming of the city and change of the emblem.

Currently, the Emblem of Astana is sky-gold color surrounded by red with the image of national symbols — shanyrak and «Baiterek». However, the previous design of the emblem was quite different.

Astana originates from the 30s of XIX century, when construction of Akmola fortress, one of the main strategic centers to strengthen Russia’s positions in Kazakhstan began.

The city was named Akmolinsk until 1961.

The Emblem of Akmolinsk, a project was prepared in 1868. 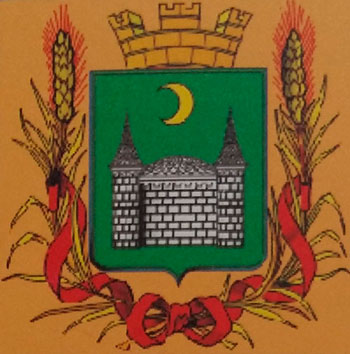 Silver Kara-Kirgiz monument with 2 pointed towers and a dome in the middle with a crescent shield facing right is in green shield. The shield is topped with a crown and surrounded by golden spikes connected by Alexander’s ribbon.

It is believed that Niyaz biy Mausoleum (Ablai Khan’s counsellor) that stood on the hill of Astana was depicted on the emblem, the first group arrived there to build Akmola fortress. 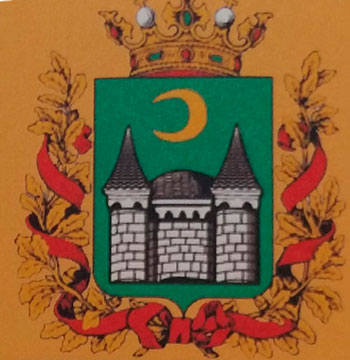 A silver monument with two pointed towers and a dome in the middle in the green shield followed by a golden crescent in the head of the shield. The shield is decorated with the Ancient Tsar’s crown and surrounded by golden oak trees connected with Alexander’s ribbon.

Due to development of virgin lands, a city with 100 thousand population became a center of Tselinny krai and Akmolinsk was renamed into Tselinograd. 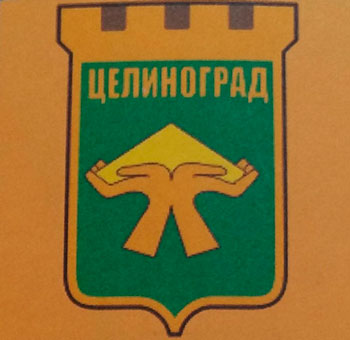 The city had been called Akmola since 1992. In 1998, the city was given its present name Astana and obtained a new administrative value — a capital of the Republic of Kazakhstan. 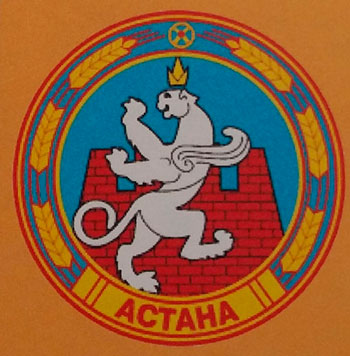 A round Eastern shield is in the basis of the emblem. A white winged Saka leopard is in the blue field on a background of purple wall. The image of leopard is made in the Scythian animal style. A golden crown in the type of Kazakh khan headgear is on leopard’s head. The crown symbolizes Supreme sanctification of history of the city — bravery and dedication of the last khan Kenesary, wisdom and courage of the first President of the Republic, who took a fateful decision to move capital in the city of renewed state.

Purple wall reminds of history of the city as a fortress and a military outpost. The white color symbolizes nobility and purity of thought. Heraldic shield is framed by gold wheat ears line symbolizing international recognition and fame of the region as a world-famous barn of valuable and durum wheat and a city as a capital of bread sector. Ears are surrounded by golden bordure. Shanyrak — the symbol of hearth of Kazakhs is at the top of the shield. A bird — a gold line with lettering image of direct font Astana is at the bottom.

The emblem is made with adherence of canons of international heraldic symbolics. Color and graphic techniques show ideological and semantic content of the emblem, where historical events from the city life associate with people who played a crucial role in the acquisition of state independence and development of the country are reflected in a symbolic way.