Home News The 170th anniversary of Abai: the path of Abai and his disciples

The 170th anniversary of Abai: the path of Abai and his disciples 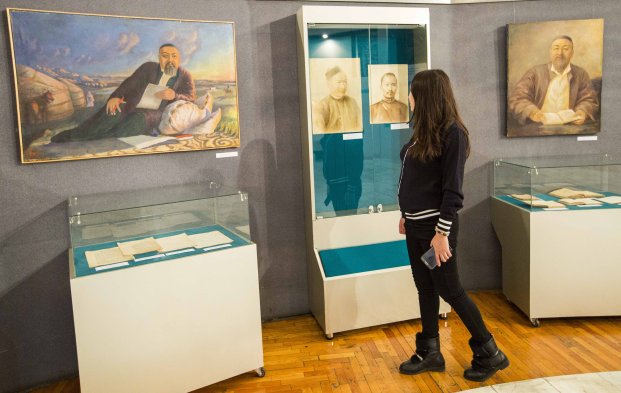 Preservation of the heritage of the great Kazakh poet is a matter of life of the famous scientist and researcher of Abai, Kayum Mukhamedkhanov

He is the founder of the first museum in the homeland of Abai, a prisoner of Karlag and public figure. His fundamental study of literature and culture, textology problems of Abai, Shakarim became classics of Russian science and real feat of the scientist.

The word «feat» is really appropriate here, because saved the great word of Abai in spite of circumstances every day. He never retreated and did not betray his teacher Mukhtar Auezov...

Writer, author of the novel «A path of Abai» Mukhtar Auezov knew Kayum since childhood. Student of divinity school Auezov often visited Mukhamedkhan Seitkulov’s family house — Kayum’s father. He grew up before his eyes. Talent, human qualities, decency, knowledge and diligence of the young man stroke Mukhtar Auezov. After a while, Kayum became his disciple.

In 1938, he got a few tasks from his mentor. One of them is to create a museum of Abai. Everything about the great poet was sacred to Kayum. Kayum Mukhamedkhanov spent a lot of time in difficult trips to remote villages with his colleague Boris Ackerman, collecting manuscripts of Abai and his disciples and exhibits for the future museum.

The official opening date of the First State Museum of the poet and enlightener Abai Kunanbayev — 1940. Over the years the museum has changed radically and continues to change. This is a good sign: it means, that the museum lives and so the legacy of the great writer.

At the end of the 30s, the heritage of Abai and his entourage could fall into oblivion. There were a lot of things to do: to record memories of old people — witnesses of the life and work of Abai and his disciples; to restore their works, preserved in the oral form, to study written passages and to prove their belonging to the poet by the method of textual analysis. Time was running out, old people died, verses were forgotten and manuscripts disappeared.

The country was under the fear of Stalinist Repression. In 1937, Kayum’s father — Mukhamedkhan Seitkulov, philanthropist, who devotedly served to his people was shot. Unconditional merit of the scientist was that he gave scientific proof of the extistence of the literary school of Abai for the first time.

The works of Abai’s disciples found by Mukhamedkhanov and scientific biographies of poets written by him were gradually introduced into scientific circulation. There are books that can lie on the desk or on the bedside table. We open them, when we need a breath of fresh air, advice or simply few great and deep phrases. Such books are works of the great poet’s disciples. They are well-known now, they are studied at schools and universities: «Dagestan», «Zulus», «Khisa Zhusup» by Akylbay, «Medgat Kasym», «Enlik-Kebek» by Magavya, «Sabalak», «Kenesary-Nauryzbay» by Kokbay, «Salikha Samen» by Aset and translation of «Evgeny Onegin», «Birzhan and Sara» by Arip, works and translations by Turagul, Muka, Aubakir and many other disciples and the followers of Abai.

The way of Abai and his disciples to us was not easy. In the grim years of Stalin’s repressions they had to fight and be willing to give freedom and life. «What is death, when people of Alash Orda died?», «How could you lie and then to live with this lie?», «Happiness is to be free, to tell the truth and not be afraid of anything. It is the most important for person. It is the only way to live».

These statements of Kayum, his thoughts in those difficult years of trial give evidence of his position of scholar-patriot, the main issue for him was to preserve historical truth and meaningful statum of our culture. Mukhamedkhanov was able to provide relations with Russian, Western and Eastern literature and culture, which influenced on works of Abai’s disciples. For instance, the influence of Pushkin’s poems «Bakhchisarai fountain» and «Prisoner of the Causacus», Lermontov’s «Mtsyri» and «Demon» on the works of Akylbai and Magavya in the works «Dagestan» and «Medgat Kasym»; influence of the novel «King Solomon’s Mines» by Haggard on Akylbai’s work «Zulus»...

Personal handwritings, books and things of Abai and his entourage, as well as household items and furniture — five hundred artifacts found in the expeditions became the basis for the opening of the first literary museum of Abai. The validity and ownership of each household item, furniture or clothing of Abai and his entourage were thoroughly established. Information was gathered from oral interviews with old people, witnesses and eyewitnesses of Abai’s life and his family. Kayum was looking for the first building for the museum with his teacher Mukhtar Auezov. Laying the foundations for its opening, Kayum Mukhamedkhanov was involved into huge research work, kept up a correspondence with scientific organizations and literary museums of the Soviet country, replenished funds with exhibits, books and rare manuscripts with scientists. He kept this job throughout the life, constantly passing manuscripts and documents to the funds of the museum. Also he kept teaching at university. In 1947, the museum was transferred to the Academy of Sciences KazSSR for preservation of scientific direction and Mukhamedkhanov was appointed its Director by the Decree of the President of the Academy of Sciences, Kanysh Satpayev.

Defense of a thesis «Literary school of Abai» on 7th of April, 1951 was a milestone event for Kayum. However, accusations on a scientist which began on defense continued...

Initially, these were discussions on Abai study in which pseudo-scientists took part and had the right to vote. Later it was followed by biased articles and attacks on Auezov and Mukhamedkhanov in the media during 1951 followed by dismissal of Mukhamedkhanov from the position of director of Abai’s museum and a lecturer. The arrest was on the 1st of December 1951.Semipalatinsk and Almaty prisons of NKVD. The court and the Karlag, camps of Temirtau, Karabas, Darya, Kulaaigyr, Tortaul, Prostornoe, Dolinka...

Refined physical tortures — hot and cold chambers, needles under fingernails, drops of water on the head, psychological pressure and threatening death penalty did not break Kayum Mukhamedkhanov: he did not reject scientific ideas and kept Abai’s school. It was the only one in Kazakh literature. Meanwhile, there are few examples in world practice.

...Kayum promoted Abai whole life. He read the lectures to students. He spoke to the workers and the farmers in the enterprises through society «Knowledge», at rural schools, popularized life and works of Abai on press, radio and television. In 1970, he organized a televised club of Abai on Semipalatinsk television and was it irreplaceable TV-presenter.

Another Mukhtar Auezov’s task to his disciple was to preserve the original words of Abai. As it is known, the poet’s words were distorted and were published in this form for decades. There were various reasons: ignorance of the context during creating certain works or old Kazkh words, borrowings from oriental languages, fear of religious terms and irresponsible replacement of misunderstood words by editor to more familiar. The scholar was engaged in textual criticism of Abai’s works during all life. He wrote scientific reviews for all poems, maintaining the purity of the original words of the poet-thinker. In addition, he established belonging of 31 poems to Abai, which were previously considered to be lost or were reckoned in translation by mistake. Kayum Mukhamedkhanov himself represented whole school of literary criticism. He has been and will stay a leading researcher of Abai. We said and repeat it today without any exaggeration that he was not only a researcher of Abai’s heritage during his life, but also he was a devoted fighter for that heritage, — noted literary critic and journalist Edil Assylbek.

-Being a scholar means to establish the actual truth and what is most important-to fight for it no matter what and that is civil courage and patriotism of the scientist. The 150th anniversary of Abai was celebrated with academic edition of his works with the scientific review of Kayum Mukhamedkhanov to all poem. A significant role belongs to the scientist in the preparation of publishing the encyclopedia «Abai». A bibliography of Kayum Mukhamedkhanov’s published works includes more than 1000 items, a significant part of which belongs to Abai study. Mukhamedkhanov’s contribution to the revival of the magazine «Abai» at the dawn of independence is known to all. In 1918, this magazine was published in Semipalatinsk by Aimauytov and Auezov for the merchants’ expenses, among them was Kayum’s father — Mukhamedkhan Seitkulov. In the formative years of independence, Kayum Mukhamedkhanov together with his colleague Ryskhan Mussin revived the magazine «Abai» and published his own materials, while continuing to contribute to the science of Abai. Interest to his materials was so great that sometimes half of the magazine consisted of Mukhamedkhanov’s publications. For many years he was an honorary chairman of the editorial board of that magazine.

The exhibition will run until December.

Kayum Mukhamedkhanov (January 5, 1916 — June 30, 2004) — poet, writer, playwright, translator, consummate teacher and mentor, a devoted disciple and companion of Mukhtar Auezov, a member of the Union of Writers of the USSR since 1940. The author of the text of State Anthem of the Kazakh SSR (1945), laureate of the State Prize of the RK (1996). The participant of the Great Patriotic War. The owner of the numerous titles and awards: winner of Gold medal of Abai International Academy (London, 1995), first winner of the Abai International Award of Kazakhstan Writers’ Union (1996), first laureate of the literary prize «Alash» of Kazakhstan Writers’ Union (1996), laureate of the prize of Journalists’ Union of Kazakhstan. Central State Museum jointly with the Regional History Museum of Semei presents exhibition «Abai;s world» dedicated to the 170th anniversary of Abai (Ibragim) Kunanbayev.There are manuscripts, books, publications of Abai kept in the funds of CSM RK, including the unique work of poet and educator «A few words about Kazakhs’ origin», now recognized by scientists as «Abai’s».

Magazine «Abai», prepared for publication by representatives of the party «Alashorda» in Semei in 1918, the novel «Hard Times» by Mukhtar Auezov and handwriting by Akhat Shakarimuly Kudaiberdiyev (1900-1984), transcribed from Arabic script to the Cyrillic and typed. Along with it, handwritings and editions written in Kazakh language by Latin: «A youthful poem of Abai», «In the words of aksakal Musirali» and «Abai Kunanbayev. Selected poems». Visitors will see Dilda’s dombra, Abai’s senior wife, Abai’s togyzkumalak, borik (head-dress) of his brother Iskak, Mansura’s waistcoat, the pupil of his younger brother Ospan, as well as recently received shezhire (chronicle) of Abai’s relatives and descendants to funds of the museum, compiled in 1987 by Azat Arkhamuly Iskakov and previously unknown photos.

Photographs, archival materials from the collections of the Regional History Museum of Semei occupies a proper place on the exhibition. A letter of Abai to his son Magauya, written in 1896, dcouments with Abai’s signature, characteristic given to Abai in 1903, copies of the personal documents, books, ethnographic artefacts reflecting the poet’s age are among the valuable an very interesting exhibits.