Home News History will be learned systematically in Zhambyl region

History will be learned systematically in Zhambyl region 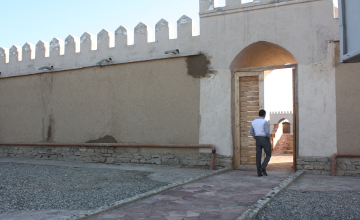 Taraz in ancient times was on the crossroads of Western Empire to East and East Empire to West.

Public council on the coordination of the study on national history was created in Zhambyl region, according to the press service of local governance.

The first deputy mayor of region Karim Kokrekbayev headed this public council. Many scientists, writers, public figures, veterans and civil servants were included in it.
K. Kokrekbayev entrusted to the responsible parties to establish on the basis of Taraz State University named after M. Dulati and Taraz State Pedagogical Institute to create research centers on studying the history of the area and Taraz city.
«History of Zhambyl region is rich and has not been well discovered. The research does not have systematic approach, Despite of many studies that have been made since the second half of the 19th century, the history of area still conceals many mysteries and puzzles rooted in the ancient times, the times of Karakhanid and prosperity of Taraza city as one of the important center of Great Silk Road- said well-known figure, a veteran journalist, writer, poet and playwright, ex-Senator Bekbosyn Argynbayev».

Moreover, according to Zhambyl litterateur, it is not enough to study the role of Taraz as one of the border of civilizations. «In ancient times Taraz was on the crossroads of Western Empire to East and East Empire to West, says A. Bekbosyn. In this area there were conflicts between Achaemenid, Alexander the Great, the Arab Caliphate, on the one hand, and on the other hand Chinese empires (Qing, Tang). Exactly here at this land happened one the decisive battles, which can be called a battle between civilizations. In 751, the battle between troops of the Abbasid Caliphate, Turgesh Khanate and Chinese Tang army happened near the wall of Taraz. This battle put the end of the promotion of Tang Empire to the West.
After this grand collision Western, Muslim, Confucian and Oriental civilizations of the 70th meridian, Taraz was established as the border between East and West. After this battle, the Arabs stayed in moving to the East and the Chinese in their quest to the West».

In addition, according to A. Bekbosyn, today there is a necessity to educate the youth, not only in historical issues as political repression in 30-50s, but also the heroism of the Soviet people, which includes Kazakhstan and in the Great Patriotic War, outstanding personality and great constructions of the Soviet period. «Recently there is a little information about this. In textbooks also there is limited information. Thus our students do not know who was the, for instance, Marshal Zhukov», — said A. Bekbosyn.
«Certainly, the era of independence of Kazakhstan associated with the name and activities of the President N. Nazarbayev should draw close attention. And all moments are very important, as it known that from individual parts develops the overall picture of our history» — said A. Bekbosyn.

Materials on theme
Happy First President's Day, Kazakhstan!
Mashkhur Zhussup and oral history
Trick that was put forth by Kazakhs at Anrakay battle
For what were the “Chubarovtsy” judged?