Historical Dates on the Bosphorus 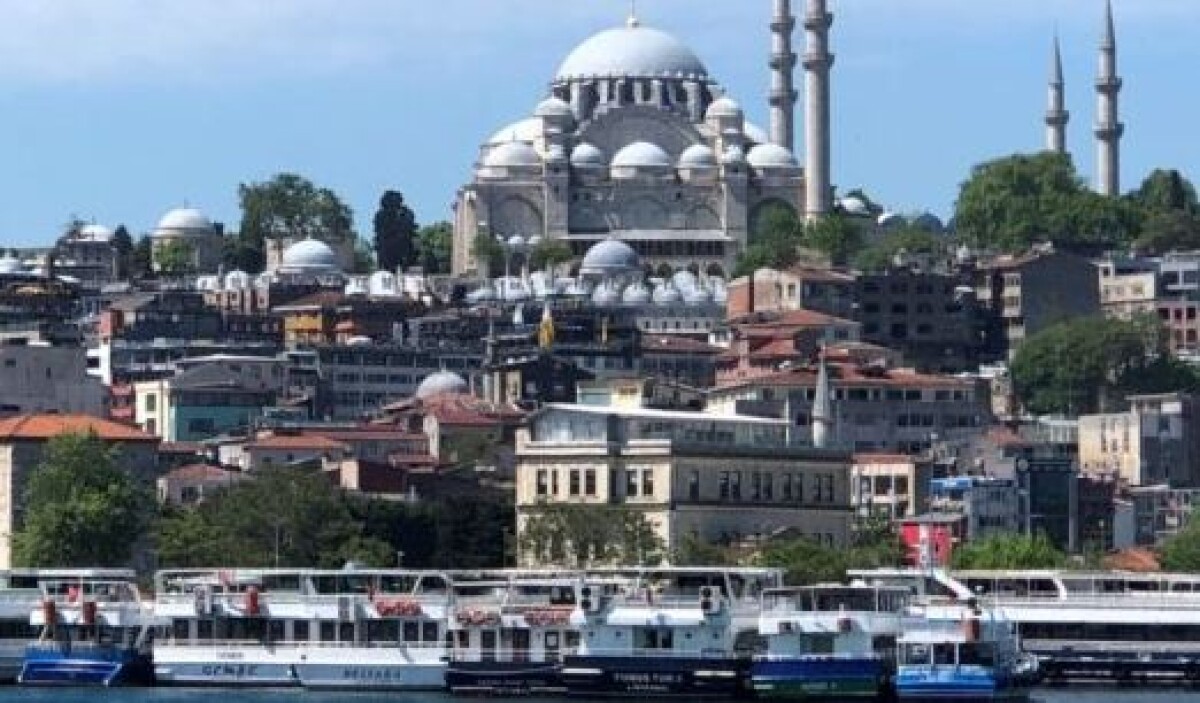 In recent years, the Ministry of Education and Science of the Republic of Kazakhstan has regularly announced competitions in scientific projects for obtaining scholarships so that scientists can realize their scientific ideas and potential. The employees of the Institute of History and Ethnology named after Chokan Valikhanov develop new projects and attend scientific trips annually.

In February-March 2022, the chief researcher of the Institute, Doctor of History, Professor Z.T. Sadvokasova, and PhD student, employee of the Department of History, A.S. Margulan, visited leading libraries in Istanbul (Turkey). Scientists decided to share the results of a scientific trip with the Qazaqstan Tarihy portal.

There is no progress without science

For the first time in a history, a competition for scientific projects on grant funding was announced in Kazakhstan during the period of 12 and 27 months. Following that, scientists could submit projects lasting up to 36 months the following year. In 2022, the Ministry of Education and Science of the state invited scientists to prepare new projects for up to 3 years to implement their ideas. These innovations had a positive impact on the state of Kazakh science and made significant positive changes in the research of historians. Due to the annual competitions, the staff of the Institute of History and Ethnology, named after Chokan Valikhanov and under the direction of Corr. NAS RK, Professor, Doctor of History, Z.E. Kabuldinov, take an active part in the development of new popular scientific projects. The institute's team is currently investigating problems in 15 projects. There are projects for young scientists on grant, scholarship, and program-targeted financing among them.

One of the projects is related to the study of the activities of Orthodox and Muslim missionaries in Kazakhstan, in the second half of the 19th and early 20th centuries. The research is estimated to take 27 months, and its participants implement the assigned tasks. The project's implementation includes work in archives and scientific libraries in both nearby and distant countries. The scientists who go on business trips are invited not to limit themselves to the project, but also to establish contacts with leading universities and scientific organizations.

During February and March 2022, the researchers of the Institute, Doctor of History Professor Z.T. Sadvokasova and doctoral student of the department of history A.S. Margulan, were on a scientific mission in the Republic of Turkey. The scientists were collecting materials for the above project. In the libraries of Ataturk, Suleimani, IRCICA (Research Center for the History of Islam, Culture and Art), and ISAM (Library of the Center for Islamic Studies), the works of not only Turkish historians, but also other foreign scholars on the status of Islam and religious policy in the Russian Empire in the XVIII-the beginning of the 20th century, that is, information on the topic of the project was considered there.

A list of studied works was compiled, which were digitized and handed over to the responsible person at the Institute. By the way, the Institute has already collected a fairly solid archive of documents and rare books brought by the scientists from other expeditions. For example, interesting and cognitive materials were delivered during the implementation of the State Program “Archive-2025”. In addition to the scientists, undergraduates, doctoral students, and others are allowed to cooperate with them.

I would like to note that it is not easy to get into the libraries of Istanbul. Ruslan Ibrayev, a graduate of the Eurasian National University named after L.N. Gumilyov and a doctoral student at Marmara University, was a huge assistant in resolving this issue. He contacted the leadership of the ISAM library, in particular with the Deputy Director, Recep Yilmaz. I introduced him to this task and explained the purpose of visiting the library of Kazakh scientists. Considering the short time frame of our stay in Istanbul, Recep Yilmaz gave us an opportunity to work in the library until 18:00, although other readers were limited to 4-5 hours. At the same time, the Deputy Director expressed a request for the possibility of obtaining books by the scientists of the Institute. At the next meeting, his wish was eventually fulfilled. The readers of the ISAAM library will now be able to explore the works of our employees, as they were given the books by historians of the Institute of History and Ethnology as a gift. 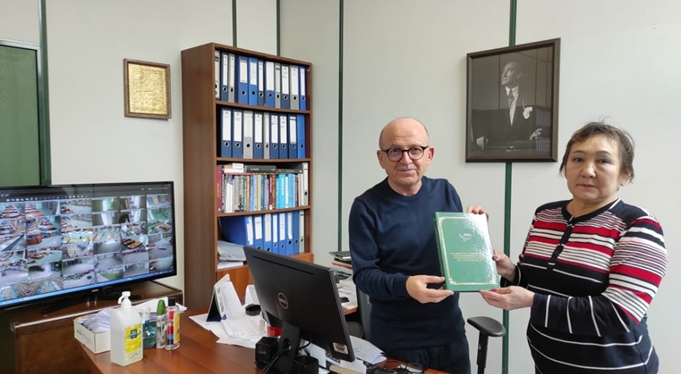 Before leaving Istanbul, Ruslan repeatedly took an interest in our affairs, gave advice, and warned us about changes in the work schedules of libraries and universities. We would like to wish him a successful defense of his doctoral dissertation and success in his upcoming interesting scientific activities.

Help for the co-workers

In the context of a pandemic, supplemented by new challenges, there is an unspoken agreement on mutual assistance between the employees of the Institute. It lies in the fact that scientists traveling on scientific trips outside of Kazakhstan paid attention to information on other projects when investigating the documentary materials due to their capabilities. In order to fulfill this agreement, we have identified interesting materials on some of our Institute's projects. For example, we found maps from the 12th century in the Soleimani library. 18 copies were made from them. In addition, we discovered interesting information and brought more than ten books to domestic historians as part of projects to explore the historical heritage of the Golden Horde.

On the eve of the trip, the possibility of signing memorandums with individual scientific organizations and universities in the Republic of Turkey was discussed as well. The result of the preliminary work that has been done was the signing of two memorandums. One document on cooperation of the Institute of History and Ethnology named after Chokan Valikhanov was signed with the International Organization for the Study of the History of Islam, Islamic Culture, and Art (IRCICA). Doctor of Historical Sciences, Professor Ashirbek Kurbanovich Muminov, provided great assistance in organizing and signing the memorandum. The IRCICA website contains information about the meeting in three languages: English, Turkish, and Arabic, with pictures. It gives the following message:

“A Memorandum of Understanding on cooperation with the Institute of History and Ethnology named after Chokan Valikhanov, during the visit of Professor, Dr. Zakish Sadvokasova, Principal Researcher and PhD student Aida Margulan, the researcher, to IRCICA as of February 28, 2022. The delegation was received by the Deputy Director Professor, Dr. Abubakar Abdullah Senghor, Assistant General Director, and senior officials of IRCICA. The memorandum of cooperation defines the basis for joint academic activities”. 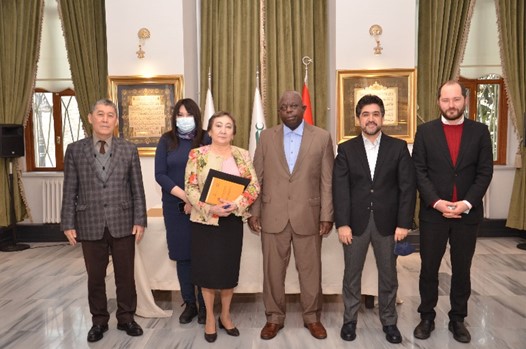 The IRCICA library was replenished with books published by scientists of our institute that were presented to Professor Dr. Abubakar Abdullah Senghor in the process of signing an agreement. In return, he presented the institute with 2 books that complemented the library of the scientific institution.

The ceremony of signing the Memorandum of Cooperation with Yeditepe University was attended by the Vice-Rector of the University, Prof. Dr. Yesim Ekinci, Professor and Doctor of History. Ahmet Tasagil, administration staff, and others. The agreement expands the boundaries of scientific activity both for the employees of the Institute of History and Ethnology named after Chokan Valikhanov, doctoral students and undergraduates, as well as for the teachers and students of Yeditepe University. Within the framework of the signed document, scientists will be able to participate in the work of scientific conferences and symposiums organized by the university, jointly develop projects and take part in their implementation. Young employees of the institute, including doctoral and undergraduate students, can seek advice from leading scientists at the university as well as discuss the management of dissertations with them.

The Professor, Doctor of History Ahmet Tasagil, donated eight books to the library of the Institute, of which he is the author. Employees will be able to investigate them in the original, as they are written in Turkish.

A scientist at Mimar Sinan University, Doctor of History Abduakhap Kara is one of the leading Turkish historians and a close friend of the scientists. Being in Istanbul, we could not help but meet with our Turkish colleagues. Unfortunately, during our stay in Turkey, the university did not work, so the meeting with him was scheduled in a symbolic place—near the Abai`s monument. It is worth noting that the monument to the great Kazakh poet and composer of the Turkic world was erected in 2021 in honor of the 175th anniversary of the poet. As a result of the work carried out by the Embassy of the Republic of Kazakhstan in Turkey and the Consulate General of the Republic of Kazakhstan in Istanbul, the Majilis of the Mayor's Office of Istanbul decided to open a square and dedicate a monument to Abai. The author of the monument is a full member of the Academy of Fine Arts in the Republic of Kazakhstan, sculptor Murat Mansurov. 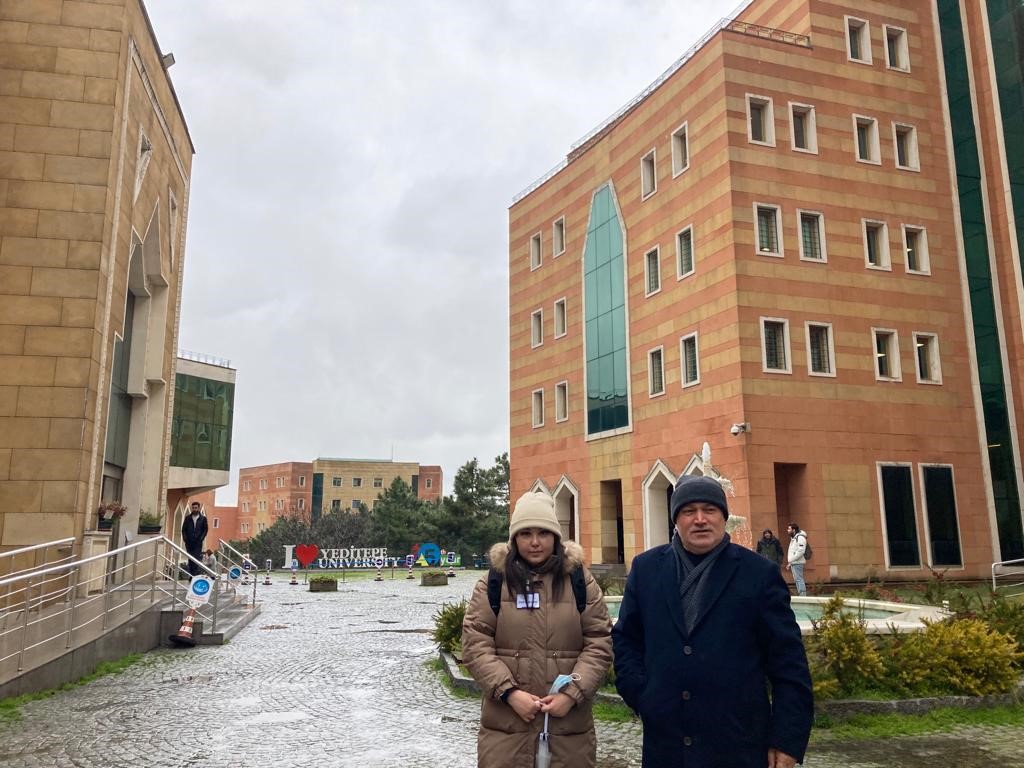 At a meeting with Professor Abduakhap Kara, books written by scientists from the Institute of History and Ethnology named after Chokan Valikhanov were awarded to the readers. The professor expressed his readiness to cooperate with our scientists.

The researcher A. Margulan received the necessary advice from the historian and professor at the University of Marmar, Ilyas Kemaloglu, on the topic of a doctoral dissertation related to the study of the life and work of the khans of the Golden Horde, as well as on the topic of the youth project, "Reconstruction of the Golden Horde settlement of Aktobe-Laeti". The scientist does not rule out the possibility of future scientific collaboration with scientists from the institute.

Appreciation messages for the support

The meetings that took place on the Bosphorus left the most favorable impressions. If individual Turkish historians were known to the university and scientific environment of Kazakh state, then contacts were established with some people for the first time. The openness, sincerity, politeness, and friendliness of Istanbul scientists testify to the desire to cooperate with representatives of Kazakhstani historical science, in particular, with the staff of the Institute of History and Ethnology named after Chokan Valikhanov. I would like to express my most sincere gratitude and appreciation to the Istanbul scientists for their attention and support.

Thus, due to the policy pursued by the Kassym-Jomart Tokayev and the Ministry of Education and Science, the country's scientists have created favorable conditions for the development and cultivation of Kazakhstani science, that will make a significant contribution to the further prosperity of the country.

Author: Aliya Kulmagambetova
Use of materials for publication, commercial use, or distribution requires written or oral permission from the Board of Editors or the author. Hyperlink to Qazaqstan tarihy portal is necessary. All rights reserved by the Law RK “On author’s rights and related rights”. To request authorization email to or call to 8 (7172) 57 14 08 (in - 1164)
Қазақша Русский English
THE MOST WIDELY READ
Year
Philosophy of the Emblem President of Kazakhstan took part in the opening ceremony of celebrations dedicated to the 175th anniversary of Abai Kunanbayuly Abdurakhman Aitiyev and his struggle Nurmukhan Zhanturin. Actor who played himself Ydyrys Mustambayev. Defender of Abai and Magzhan Online documentaries Kassym-Jomart Tokayev sent a telegram to UN Secretary General António Guterres History of pandemic in Central Asia THE GREAT SON OF THE GREAT STEPPE What was the composition of the country’s Supreme Soviet of the XII Congress Armenians and their kinship with the Kazakh people Nurtas Ondasynov. Kunayev’s Chief
Polls
Materials on the topic
Labels of the Golden Horde khans and Russian clergy
From the story of a blood feud
A role of Buddhism in formation of Central Asian mythologies
The referendum on the Constitution is a significant stage of democratization