Home News People who eat horses will kill you

People who eat horses will kill you

According to the legend, it was this prediction that the fortune-teller gave the young Napoleon. The future Empereur des Français only responded to the prediction of the fortune-teller with an explosive laugh, but many years later, calling on the French sons to volunteer, he chanted from the rostrum that the First Empire was threatened by the intervention of the steppe dwellers who fed on the meat of horses.

According to the historical notes, it is known that before the October Revolution of 1917, it was customary to call Kazakhs as “Kirghiz”, less often – Kirghiz-Kaisaks. Despite the fact that almost all Kazakhs of that time fought as part of the Bashkir regiments, it was not difficult for the Europeans to distinguish Kazakhs from Cossacks or Kalmyks who also fought in other parts of the Tsarist army. Perhaps the main distinguishing feature between the Kazakhs and the Bashkirs could be the difference in weapons. The fact is that, starting from 1736, the Tsarist policy pursued an organized and methodical course towards the demilitarization of the Bashkirs. A series of Bashkir uprisings, the cause of which lay in the fear of losing patrimonial lands as a result of the forced colonization of Bashkortostan, became a reactionary response to the measures taken by Tsarism against the indigenous population. The dissatisfaction with the growth of taxes, abuses, and arbitrariness of high officials resulted in armed protests of the working masses against feudal and national oppression. After several capacious and painful losses, which became the result of the uprisings of the Bashkirs in 1681-1684, 1704-1711, and 1735-1740, the government of Tsarist Russia decided to abandon the Christianization of the Muslims of Bashkortostan, and the right of the Bashkirs to the land was confirmed, but forbade the Bashkirs to have firearms and own forges. This could be the reason that the lion's share of the Bashkirs in the Patriotic War of 1812 were deprived of weapons, while this veto did not apply to the Kazakhs.

In addition to direct participation in hostilities, the Kazakhs supplied the military units of the allies with provisions, in particular, good and affordable meat. The cattle and cattle-breeding raw materials brought by the Kazakhs to the Orenburg region cannot be overestimated, especially in light of the continental isolation that Napoleon inflicted. It is also known that in the period from 1804 to 1815, the Younger Zhuz sold over 1 thousand, and the Bukey Horde – over 48 thousand heads of cattle for the needs of the army.

There is a high probability that the Kazakhs entered the war with the French Empire much earlier than the Russian-French war began. The War of the Fourth Coalition, in which France, Spain, Bavaria, and Italy took part against Austria, Russia, Great Britain, Sweden, and the Neopolitan state, resulted in the Peace of Pressburg, which deprived Austria of a number of territories, and the Neopolitan kingdom lost its independence, and the War of the Fourth Coalition had begun as well. The huge losses suffered by Tsarist Russia forced the Orenburg Bashkirs to ask for help, including many Kazakhs. The total number of soldiers sent to help was over 7 thousand people.

The names of the first Kazakh soldiers were given officially during the first month after the start of the war in Russia. On July 27, 1812, Murat Kulgoranuly and Yerish Azamatuly especially flashed in the clashes at the Malaev Bolot. On August 26 of the same year, during the Battle of Borodino (or the Battle of the Moscow River, as French historians call it), thousands of brave Kazakhs died near the village of Borodino. Many were awarded a silver medal (Mailybayuly), a medal on a blue ribbon (Karynbay Zyndagululy), and the Order of St. George (Mayor Bolat).

The uncertain outcome of the battle of the troops, where the losses of the parties were approximately equal, continued with the fact that the Tsarist army began to prepare as a counteroffensive army. In pursuit of the retreating French army, led by Ataman Platov, the Don Cossacks marched, and the 1st Bashkir Regiment marched along the streets of defeated Moscow as the next regiment. This is confirmed by a letter to the Orenburg Governor-General G. S. Volkonskiy from Field Marshal M. I. Kutuzov: "You cannot imagine your excellency, the joy and pleasure with which each and every one of the Russian soldiers strives for the fleeing enemy and with what courage our soldiers, including the Cossacks and some of the Bashkir regiments, strike them". In subsequent battles at Ramonovo, Boranbay Shuashabaiuly and Yksan Aubakiruly distinguished themselves with courage and bravery. Sagit Khamituly, a Cossack officer, was awarded the Order of St. Anne for his exploits in the battles near Vyazma.

The Kazakhs, as part of the Tsarist army, moved to the borders following the retreating army of Napoleon. At the end of the autumn of 1812, the troops of the French army were nailed to the Berezina River and destroyed by the forces of Generals Chaplits and Wittgenstein. The 4th and 5th Bashkir regiments fought in the corps of the latter, which became a harbinger of the complete defeat of Napoleon. In the first days of January 1813, the Kazakhs of the 1st Bashkir regiment, as part of Platov's army, crossed the Vistula and besieged the Danzig fortress with 40 thousand enemy soldiers. Then, they were joined by about 10 more regiments, which also included many Kazakh batyrs.

While the siege of the fortress was going on, which lasted a little less than a year, a great battle took place near Leipzig in mid-October 1813, which went down in history as the "Battle of Nations". More than 500 thousand soldiers from both sides participated in this bloody massacre. In his memoirs, the French general and military writer Jean Baptiste Antoine Marcellin de Marbeau noted that "The newcomers, who still did not know the French at all, were so inspired by their leaders that, expecting to turn us into flight at the first meeting on the very first day of their appearance, in view of our troops, they rushed at them in countless crowds, but, met with volleys from rifles and muskets, they left a significant number of dead on the battlefield. These losses, instead of cooling their offensive, only warmed it up. They swept around our troops like swarms of wasps, sneaking everywhere. It was very difficult to catch up with them.

The skills of the Kazakh warriors were somewhat new to the troops of the French generals. The military historian N. Garnich wrote: “A small arrow, fired by the strong and skillful hand of a Kazakh, Bashkir, or Tatar rider, hit the enemy’s eye or throat exactly”. Moreover, they skillfully shot at the target with such force that an arrow at a distance of 15 fathoms could pierce through not only a person, but also a horse. 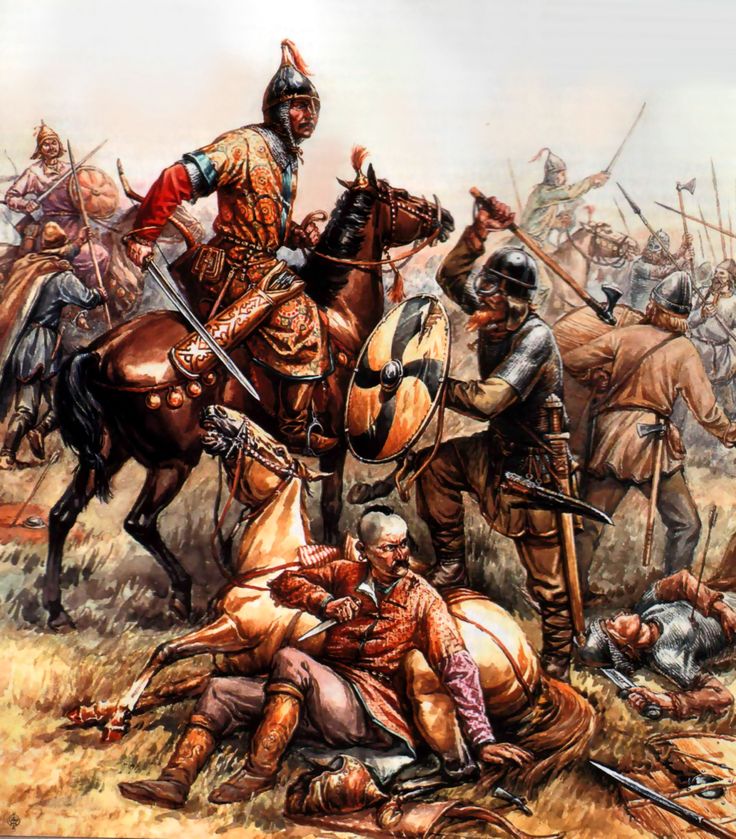 The deep and devastating defeat of Napoleon was the result not so much of the desperate attempts of the Kazakhs to break through the enemy in direct clashes, but rather of the amazing skill of exhaustive pursuit of the enemy. Receiving the Order of St. Anne and taking part in the sieges of Glogau and Leipzig as part of General Leonty Bennigsen's military units, Narynbay Zhanzhigituly and the warrior-poet Amen Baibatyruly pressed the French and were the first to enter Paris.

An interesting fact is that during the persecution of French soldiers from the lands of Hamburg, Berlin, and Frankfurt am Main, Kazakh batyrs met with the German writer I.V. Goethe in Weimar, who was later presented with a bow and the national musical instrument “Sazsyrnai”.

The commander of four Cossack regiments, the ethnic Kazakh Kazybay Chernysh, who was orphaned in childhood and brought up by the Cossacks of Orenburg, died in the Battle of Paris. It is noteworthy that a year after entering the service in 1788, he received the rank of “Yesaul”. He was awarded the First Class Order of St. George.

On March 31, 1814, the troops of Tsarist Russia and the Prussian army that joined them entered the capital of France. The Turkic warriors in the Russian army, very friendly and established ties with the local population, did not rob or destroy the city.

The Russian poet and partisan, Lieutenant General Denis Davydov, spoke about Kazakh soldiers as follows: “They are short, lean, and have a bronze complexion. They also have black hair, like a raven’s wing, and they also have eagle eyes”.

Several circumstances can be noted in arguing about the reasons for the participation of thousands of Kazakh soldiers in the European war of the early 19th century. First of all, there was no direct coercion to go to war by the empire against the Kazakhs. Secondly, the socio-economic contradictions began to worsen with the colonization of the Kazakh steppe by Tsarism. At the same time, a certain part of the Kazakhs had already been drawn into the orbit of the social and political life of Russia by that time, including serving as part of the regular and Cossack troops. But basically, in my opinion, the reason for the participation of the Kazakhs in that war and the heroism they showed is the thousand-year-old mentality of the Turkic nomadic people, who put military prowess in the category of glorious achievements.

In total, 40 cavalry regiments were formed during the war years, each of which consisted of five hundred Turkic warriors from the Southern Urals and the Orenburg region. “There are 400-500 people in such a regiment: all are exceptionally strong, broad-shouldered, with swarthy Mongoloid faces”, said Eduard Rupel, who was captured by the Russians.

There was a lot of artistic information about the events of that time. However, the direct participation of the Kazakhs in the Patriotic War of 1812 was noted in the artistic work of the Russian battle painter Alexander Osipovich Orlovskiy. Being subordinate to the tsar's son, Orlovskiy paid great attention to the military content and painted the picture “Kyrgyz on a horse” during the Patriotic War of 1812.

Author: Ayan Aden
Use of materials for publication, commercial use, or distribution requires written or oral permission from the Board of Editors or the author. Hyperlink to Qazaqstan tarihy portal is necessary. All rights reserved by the Law RK “On author’s rights and related rights”. To request authorization email to mail@e-history.kz or call to 8 (7172) 57 60 13 (in - 1163)
Қазақша Русский English
MOST READ
Month Year
Burial mounds of the southwestern part of the Semirechye region
Union of the Archives and Library
The referendum on the Constitution is a significant stage of democratization
Heroic mothers of the great steppe
Philosophy of the Emblem
14 monuments at Tekturmas
The rural akims: the country's hope is in the elections
Kazakh historical drama Tomiris premiered in Istanbul
Stolypin about the worries and hopes of immigrants to the Kazakh steppes
ALASH IDEA IS THE PROTECTION OF KAZAKH STATEHOOD
A tireless explorer of the Kazakh land
SWITCHING TO THE LATIN ALPHABET – UNITE ALL KAZAKH PEOPLE
Kunaev Dinmukhamed Akhmedovich
People who eat horses will kill you
Kazakhstan's participation in the Winter Olympics has a long history
Materials on theme
Palace of Tselinniks built in the heart of Saryarka
REMEMBERING ABYLKHAN KASTEEV
Soldiers-Kazakhstanis in the battles for Belarus
Astana celebrates its 15th anniversary