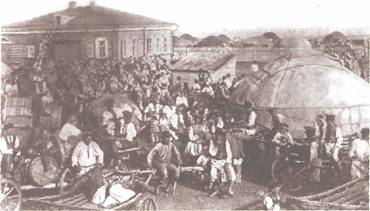 According to the opinion of many scientists of the early twentieth century, the general question of the future of Russian resettlement to the south of the Kazakh steppe could be resolved in a negative sense harshly. The Chairman of the Council of Ministers of the Russian Empire, Pyotr Arkadyevich Stolypin, wrote about this in his work “Notes about the trip to Siberia and the Volga region in 1910”. So, according to him, disquieting statements about the fragility of the steppe soils, threatening their drying out or plowing, were groundless, and the real important question was only the need for an appropriate choice of grain crops or replacing them with correct cattle breeding and skillful use of the soil moisture reserves. The Qazaqstan Tarihy portal will tell you what the author of the famous agrarian reform Pyotr Stolypin told about the significance and prospects of resettlement policy in the Steppe Territory.

During his visit to the Siberian and steppe outskirts, Stolypin noted that only “Drainage, uprooting and roads” could open wide access to the resettlement in these regions, that constituted the main part of free land reserves in those years. The author wrote the following about how this resettlement was related to the forestry: “In the end, this influx of settlers is even beneficial for the forestry. From the 244 million dessiatines of Siberian forests, only 92 million dessiatines are actually forests, and even those give only 3.5 million rubles of income per year (less than 4 kopecks per tithe). One of the main reasons for such a low profitability is the remoteness of forests from settlements, the scarcity of the Siberian population and the high cost of labor”.

According to Stolypin, only the settlement of vast forest datchas by allocating a suitable land for the agricultural cultivation and not representing a large forestry value to the settlers could raise the forestry. At the same time, he wrote: “Although, an approach of human to the forest will reduce the area of ​​forests, but it will create a local consumer market and give a timber harvesting and export for the workers”. However, an indiscriminate and random destruction of Siberian forests in many areas prompted the vigorous measures to be taken for their organization and protection. If there was no fear of the small reduction in the forest area beyond the Urals (there were 16 acres of forest per capital here, with the usual ratio of 0.5-1 dessiatines per capital on the average level), then the forest management in Siberia has developed too slowly.

So, out of 50 million dessiatines of the forests of the Tobolsk and Tomsk provinces, that were subject to the construction in the first place, only 1.6 million dessiatines were arranged over a 12-year period. There were no inventory descriptions or plans for the vast majority of forest dachas, and the number of forest guards and forestry networks was still far from the sufficient amount. On average, each forestry accounted for about 800 thousand dessiatines on the average. Under such conditions, it was difficult for the forester not only to protect the forest, but even to get acquainted with the entire space that was in his care. Meanwhile, the devastating felling and fires destroyed the Siberian forest resources imperceptibly, but quickly. Therefore, Stolypin wrote about the need to simultaneously strengthen the protection of forests of the forestry value simultaneously, highlighting the areas among the forests that could be converted for the agricultural colonization.

This was the case in Siberia. At the end of the 19th – beginning of the 20th centuries, every spade of the forest, that was called the remnant of birch forests, and had an abundant in the Kazakh steppe was on the special account. The surviving pine forests were especially valuable. Recognizing that it is not easy to protect the forests during the time of mass settlement of the steppe by Russian settlers, Stolypin nevertheless saw more danger for the forestry in the nomadic way of life of local residents (“With constant damage to any undergrowth in them by herds of nomads”). In his notes, Stolypin wrote about the need to continue the formation of state-owned forest dachas, that had begun with the inclusion of a larger number of small forest areas scattered among the lands of Kazakh use. Then, he instructed “To strengthen concerns not only about the integrity of the forest growing on them, but also the reforestation of the free areas between them, with the prohibition of any economic use”. Stolypin believed that this business could benefit from attracting Mennonites who had moved to the steppe areas and the formation of special forest teams from them. However, in accordance with his idea, this could replace the call to serve in the forest teams of the south of the European part of the Russian Empire, that was equated to serving a military service for the Mennonites of those times in accordance with the law.

However, more questions have arisen regarding to water in the Steppe Territory: will it be enough for the present and future agricultural population? Indeed, water in the Kazakh steppe was the most precious and useful of the “Fossils”. In some places, it had to be mined from a considerable depth, and it often turned out to be salty and unfit for drinking. Sometimes, the whole rivers turned out to be salty, and, the fresh and salty stretches alternated in the same river in the middle of the hot summer, depending on the soil. Some rivers were lost in the steppe floods and in the evaporation. There were cases of drying up and disappearance of entire lakes, and the resettlement villages were located near them. Finally, the droughts and crop failures have often comprehended the farmer. The most formidable was the opinion often expressed about the inevitable further loss of water in the Steppe Territory. Then, Stolypin answered: “The insignificance of atmospheric precipitation in the south of the Kyrgyz steppe and the drying up of lakes have not represented anything fatal for the resettlement yet; according to experts, the whole thing is in the sufficiency of the general reserves of moisture, that is kept in the form of open waters in rainy years, and in dry years, it is stored in the form of water vapor, in the air and earth. It is only necessary to keep a continuous record of these water reserves and to develop the meteorological and hydrometric observations that are being made now ”.

Interestingly, Stolypin noted that some Russian scientists, based on the scientific theory of Professor Bruckner about the alternation of dry and wet periods in the history of the earth, argued that the Steppe region was in a “Wet” period with a lot of precipitation until 1911. This explains the influx of immigrants to the Kazakh steppe and their relatively successful economy. But already from 1911, they predicted the beginning of a “Dry” period, that should have led to the disappearance of many lakes, a decrease of water in rivers and a deep decrease in the level of groundwater. In their opinion, all this will lead to drying out of wells, destruction of crops on non-irrigated lands, lack of water in rivers for the irrigated lands, etc.

Bruckner himself pointed out in his theory that there were exceptional places on the globe where dry and wet periods did not coincide with the same periods in other localities. As such exceptions, he directly pointed to the Kazakh steppes. Not only Bruckner spoke about this, but also the Russian professors Berg and Voeikov who worked after him, who argued that in the historical era, both Turkestan and the neighboring steppes did not undergo any noticeable drying out and that the climate here did not change for the millennia, if not consider the periodic fluctuations in the amount of precipitation. Thus, there was no talk of a gradual steady drying up of the Kazakh steppes, and the settlers only had to go through dry years from time to time, however, those that had already been here many times, as they are everywhere, still did not lead to the destruction of agricultural farms. According to Stolypin, the entire task of agricultural policy in the steppe was to adapt to the local conditions, to improve the technique of dry farming and the ability to handle water. As for the regions of little use for the agriculture, it is necessary to continue the development of cattle breeding in them.

Stolypin wrote the following about the deep drilling in the steppe regions: “In the south and southeast of the Kyrgyz steppes, the necessary land improvements are mainly in the arrangement of water supply”. According to him, a deep drilling organized in the steppe gave good results (as an example, he wrote about the success of this business in the Atbasar and Akmola districts) and made it possible to count on the settlement of many areas that were considered unsuitable due to the lack of fresh groundwater. The cost of watering with the help of deep drilling usually ranged from 2 to 5 rubles per tithe, that at that time was quite significant. However, if we take into account that this tithe could be sown with wheat and give up to 100 poods of harvest, then this expense did not seem intimidating.

Referring to the reviews of experts, P.A. Stolypin wrote that the soil conditions of the Steppe Territory, with the construction of a railway here, will contribute to occupying a prominent place in the agricultural industry of the Russian Empire in a short time. There were huge areas of virgin soil that are convenient for the cultivation and were extremely fertile despite the abundance of saline areas. By the way, he also wrote about the salt marshes: “In the latest agronomy, even a bold theory is put forward that salt marshes of low and medium saturation are the most fertile and, moreover, they are very durable and depleting the landsn slowly. The American professor, Hilgard calls saline soils as the real “Fertilizer stores”. The salt marshes only require the skill when processing and watering them, etc. " Continuing the thought, Stolypin noted the importance of choosing plants and grasses for sowing: “On many salt licks that are not suitable for sowing wheat, grasses are excellent, and Australian cattle breeding (the first in the world) has largely developed on the salt licks; many types of salt licks are suitable for the valuable industrial crops like sugar beet, cotton, etc.”.

In general, Stolypin was of the opinion that the natural conditions of Western Siberia and the Steppe Territory favored both the development of agriculture and the development of cattle breeding. This required only the transfer of known agronomic knowledge and skills to the settlers, the ability to handle land and water, in which there was nothing insurmountable.

Author: Ayan Aden
Use of materials for publication, commercial use, or distribution requires written or oral permission from the Board of Editors or the author. Hyperlink to Qazaqstan tarihy portal is necessary. All rights reserved by the Law RK “On author’s rights and related rights”. To request authorization email to mail@e-history.kz or call to 8 (7172) 57 60 13 (in - 1163)
Қазақша Русский English
MOST READ
Month Year
Kunaev Dinmukhamed Akhmedovich
History of pandemic in Central Asia Kazakh dissidents: Amangali Kenzheakhmetuly, known as the “Gang” The excavation works in the town of Syganak Living for the Kyrgyz account A death of Ulugbek Heroic mothers of the great steppe How had the World War II been started? 14 monuments at Tekturmas The rural akims: the country's hope is in the elections Philosophy of the Emblem Stolypin about the worries and hopes of immigrants to the Kazakh steppes Kazakh historical drama Tomiris premiered in Istanbul

Materials on theme
Cultural walk: first residence of N.A. Nazarbayev in Astana
Who studied together with Bauyrzhan Momyshuly?
Hot disputes about the relocation of the new capital in Kazakhstan
First diplomatic landing forces