Historical background of the National Symbols of the Republic of Kazakhstan 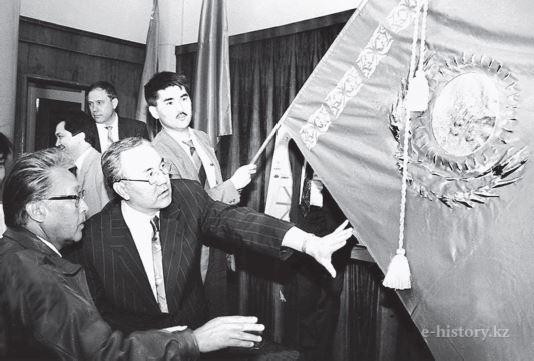 On June 4, 1992 a significant event took place; the National Symbols of Kazakhstan were adopted.

The National Symbols are heraldic images created in accordance with all canons of modern political culture and historical self-identification, declared not only the fact of national independence, but also the essence of the most important principles of construction of a new state.

The Emblem, which in German means «inheritance» or «portion», is a significant attribute of National Symbolics. History of emblems on the Kazakh land begins from the time of the first national unions here. In other words, history of emblem is a history of nation. International experience shows that distinctive features of a particular national emblem are used to distinguish it from another state. Thus during early Iron Age Saks tribes had clan totem signs that distinguished them from each other. Tamga (тамга) was a special sign, sacred symbol and tribal seal. On the clothes of the Golden Man, discovered during excavations of Issyk burial mound of V century B.C., there was around four thousands of jewelry manufactured in accordance with «animal style» and made in the form of figures of leopard, ibex, argali, elk, horses, and various birds. This idea was implemented in ornament «argali horns» («қошқар мүйіз») which is a part of our Flag. Fabulous winged Horses-Unicorns looking in opposite directions, which were placed at the headdress of the Golden Man, were taken to form the basis of the Emblem. Comparison with national symbols of states having similar history shows that equal animals, for example, griffins and eagles, lions or horses which are faithful companions of nomadic Turks, are represented on them. 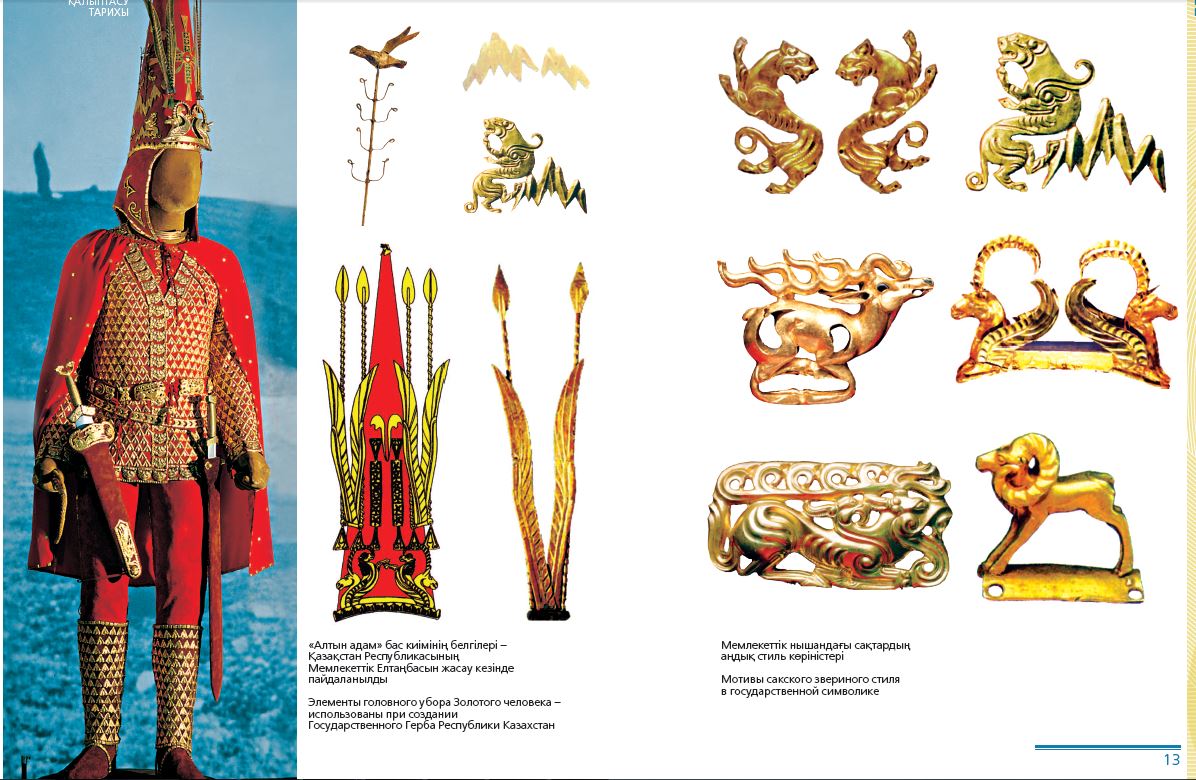 Such totem symbols are often encountered in Usun, Turk-Mongol legends, especially in the legends about Celestial Wolf (Көк бөрі). In worldviews of Turkic people wolf had a special totem role. During the time of the Turkic Khaganate Celestial Wolf was painted on the standard of Turkic troops. Therefore, in a musical composition of famous Kazakh akyn Suynbay, lived in the XIX century, contains words «The Wolf is my standard, When I raise this flag, Remember the past» («Бөрілі менің байрағым, Бөрелі байрақ көтерсе, Қозады қай-қайдағым…». Kazakh people always considered wolf as a symbol of boldness and courage. Later Kazakhs used tribal tamgas. Scientists have counted 84 tamgas of Kazakh clans descended from 43 tribes. Tamgas which had different geometric shapes were used as emblems and seals. Tamgas also served to designate clan, tribal and private property. Nowadays Kazakhs still continue label livestock using Tamga.

Flag is a special symbol of identity, independence and statehood. Its five thousand years-old history, begins in the Middle East. According to researchers, the oldest flag was found in Iran; birds, beasts and faces of the Gods were painted on it. History of blue colour of Kazakhstan’s Flag related to symbols of Turkic, Khazar, Seljuq Khaganates as well as to Timorid state and Kazakh Khanate. In the language of ancient Turks the term «blue» («көк») meant «east», «eastern». The Sun on the flag of Kazakhstan is the ancient cosmic symbol, known to all nations, means the source of life, light. The history of Kazakh people is in a genetic connection with the history of Saks, Usuns, Huns and other tribes that lived in ancient times on the territory of Kazakhstan. Ancient Turks, confessing Tengriism, worshiped Blue Sky, the Sun, Water, Air and Earth. Therefore, blue color of the Flag and symbols reflect historical continuity of the nations lived on the territory of Kazakhstan. Eagle depicted on the Flag, known as a symbol of power and strength, so this heraldic sign is presented on many emblems and logos of world states. 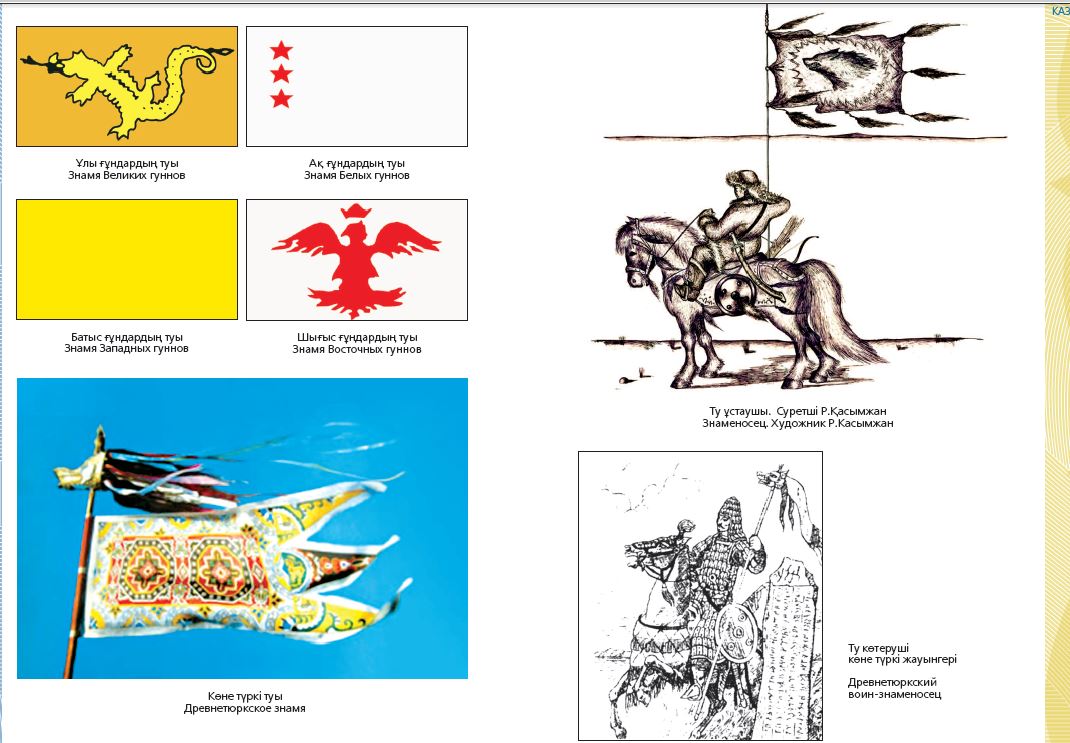 Let’s look at the history of emblems of the colonial period; in the result of the administrative-territorial reform of 1867–1868 emblems of Kazakhstan’s cities were created. Being a part of the Russian Empire Kazakh regions and cities had emblems of a common sample. For example, Uralsk, Guriev (modern Atyrau), Pavlodar, Semipalatinsk, Ust-Kamenogorsk, Petropavlovsk, Kokshetau, Kostanay, Aktobe and others had their emblems. 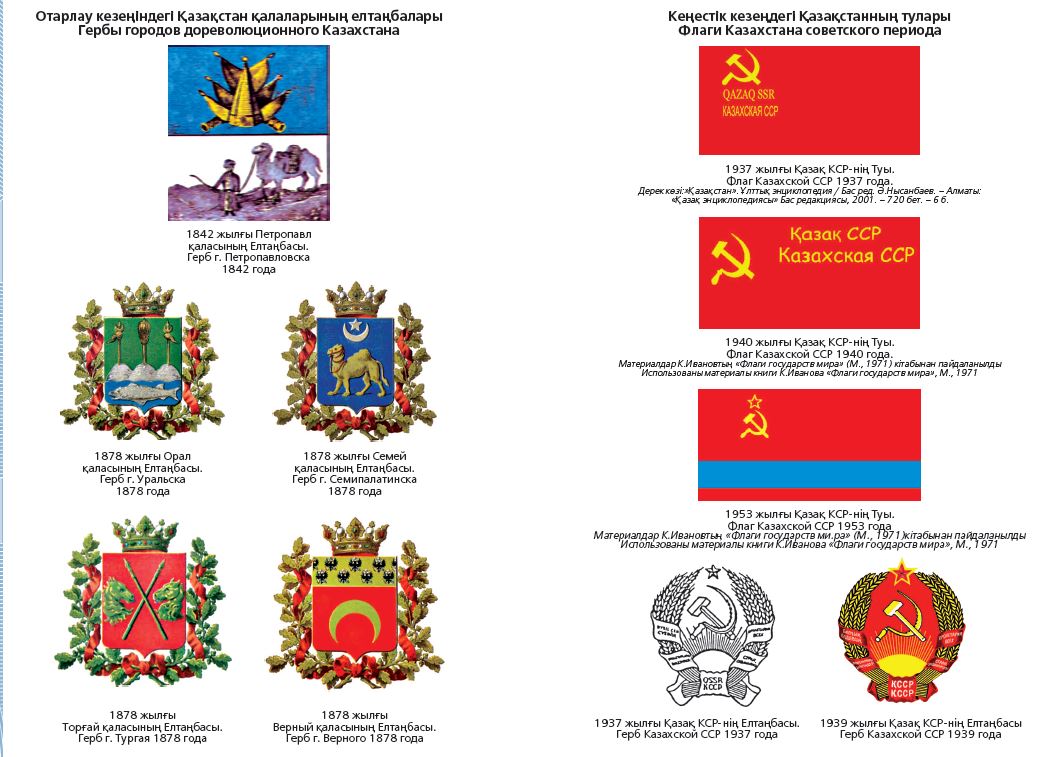 Alash-Orda government established after tsarism overthrow in 1917, at its sessions discussed the question of the need for emblem adoption, but the issue remained unresolved. Therefore, in 1918 in the «Kazakh» newspaper the article «Orda’s Emblem» («Орда гербі (таңбасы)») including an appeal for participation in emblem’s draft preparation was published. Considering the Soviet period (1920–1991), we clearly see that Emblem of the Kazakh SSR, as well as other Soviet republics, was based on the Emblem of the Soviet Union. In its center hammer and sickle were located in red beams, and the cloth there was the inscription in the Kazakh and Russian languages «Proletarians of all countries unite!» («Пролетарий всех стран объединяйтесь!»). At the top of the Уьидуь was a five-pointed star, at the foot the inscriptions «КССР» and «ҚССР» were situated. At the bottom of red National Flag of the Kazakh SSR there was a narrow blue strip, reminiscent of the original color of the National Flag. In historical documents there was encountered the evidence of the existence of Alash-Orda flags of white and green colors.

In 1991 a deep political crisis led to the collapse of the Soviet Union and opened the way to freedom. The Independence of our country was proclaimed. At that time the work on development of National Symbols of the Republic of Kazakhstan began. In early 1992 the Resolution of the Presidium of the Supreme Council on establishment of working group to prepare a new National Symbols of the Republic of Kazakhstan was adopted. In accordance with this, there was organized the commission, including such famous figures as S. Abdildin, S. Abdrakhmanov, S. Zimanov, Ye. Shaimerdenov, and others. At the same time, the competition of drafts of Emblem, Flag and Anthem was announced. Most representatives of creative and talented poets, composers and artists took part in it. The competitions of Flag’s draft attracted 600 people and 1200 drafts, while there was offered 245 drafts of National Emblem and 750 variants of National Anthem. 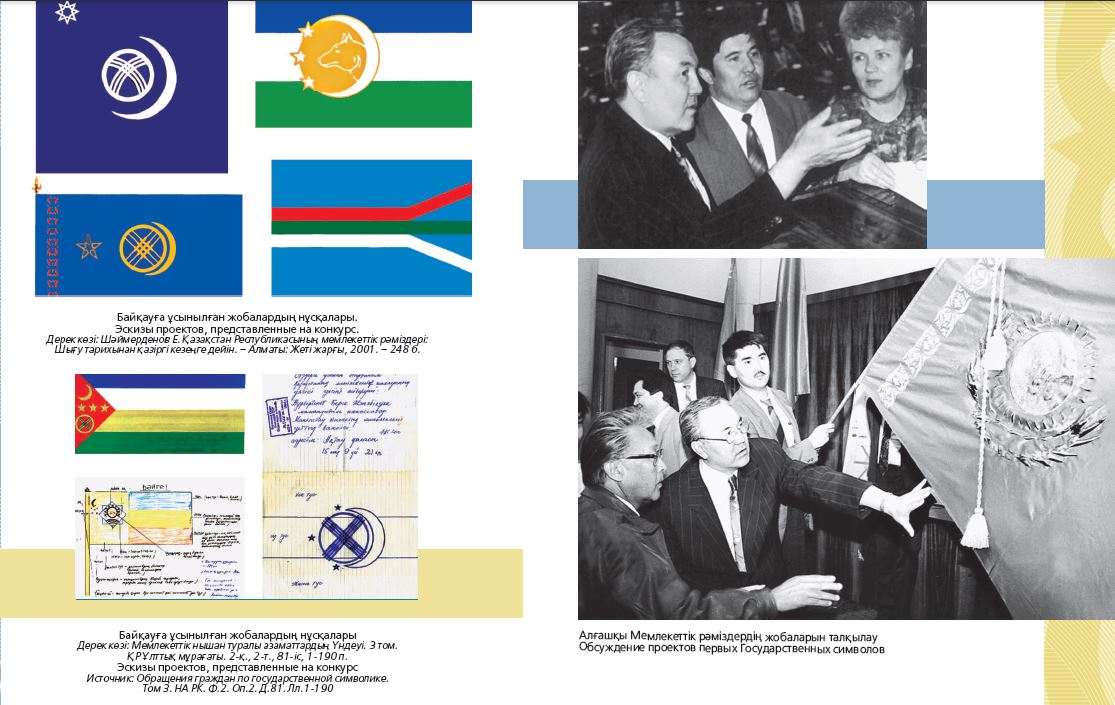 Draft of the National Flag 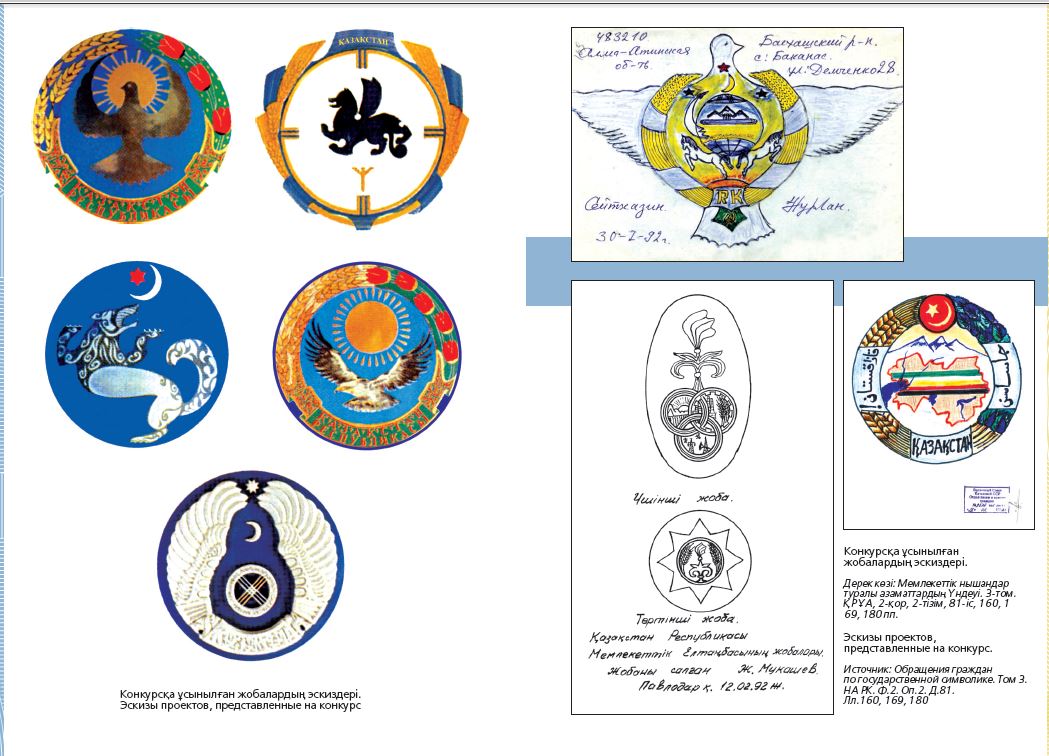 Draft of the National Emblem

The Anthem symbolizing spiritual unity is another important National Symbol. Two Anthems were adopted during the years of independence (in 1992 and 2006). T. Moldagaliev, M. Alimbayev, K. Myrzaliev, Zh. Daribaeva are the authors of words while M. Tolebayev, Ye. Brusilovsky and L. Khamidi were the composers of the first Anthem. Melody of the Anthem of the Soviet period remained unchanged. However, on May 9, 2000 the Head of State N. A. Nazarbayev raised the issue of need of Anthem’s substitution. As a result, in January 2006 the song «MY Kazakhstan» («Менің Қазақстаным») became the official Anthem. The song was written in 1956 by Sh. Kaldayakov and Zh. Nazhimedenov. This march, written during the years of the virgin lands developing, was created to waken national pride and spirit of the Kazakh people. He sounded in December 1986 as well. 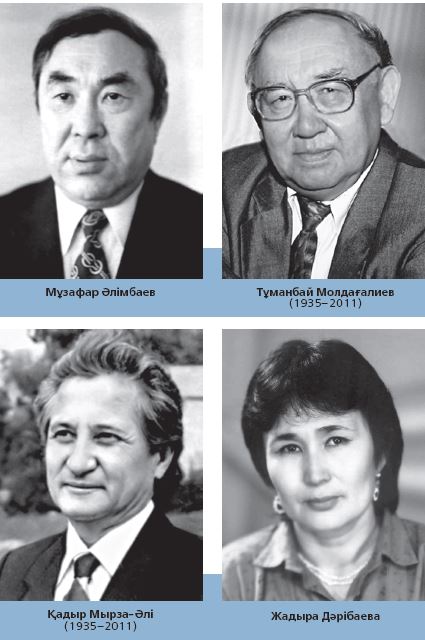 Authors of the lyrics of the first Anthem of the RK 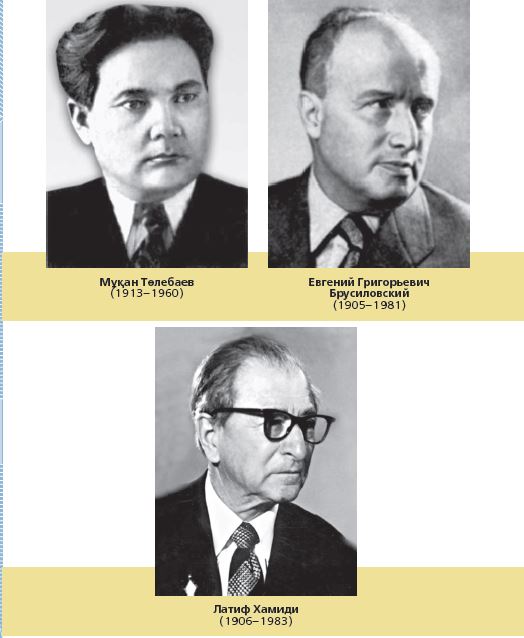 Composers of the first Anthem of the RK

President of the Republic of Kazakhstan N. A. Nazarbayev has played a special role in the process of the National Symbols’ creation. By making some relevant to today’s national ideals and goals corrections in the text, he entered into a combined team of authors. «During the adoption of the first Symbols of Independence the Head of State had given a special attention to the use of the state language and the terms in the Kazakh language — remembers Yerbol Shaimerdenov — with his own hand he deleted such words as «герб», «гимн», «символ» and changed them to «елтаңба», «әнұран», «нышан, рәміз». Today, our National Symbols are widely known in the world. The Republic of Kazakhstan has been recognized throughout the world. The Flag of our country flying on a flagpole in front of the UN headquarter and foreign missions of Kazakhstan. Kazakh Blue Flag was in space with Talgat Mussabayev. Our Anthem is played and Blue Flag is hoisted during the ceremonies for Kazakhstan sportsmen who win international competition. All this is a matter of pride for every citizen of the Republic of Kazakhstan. 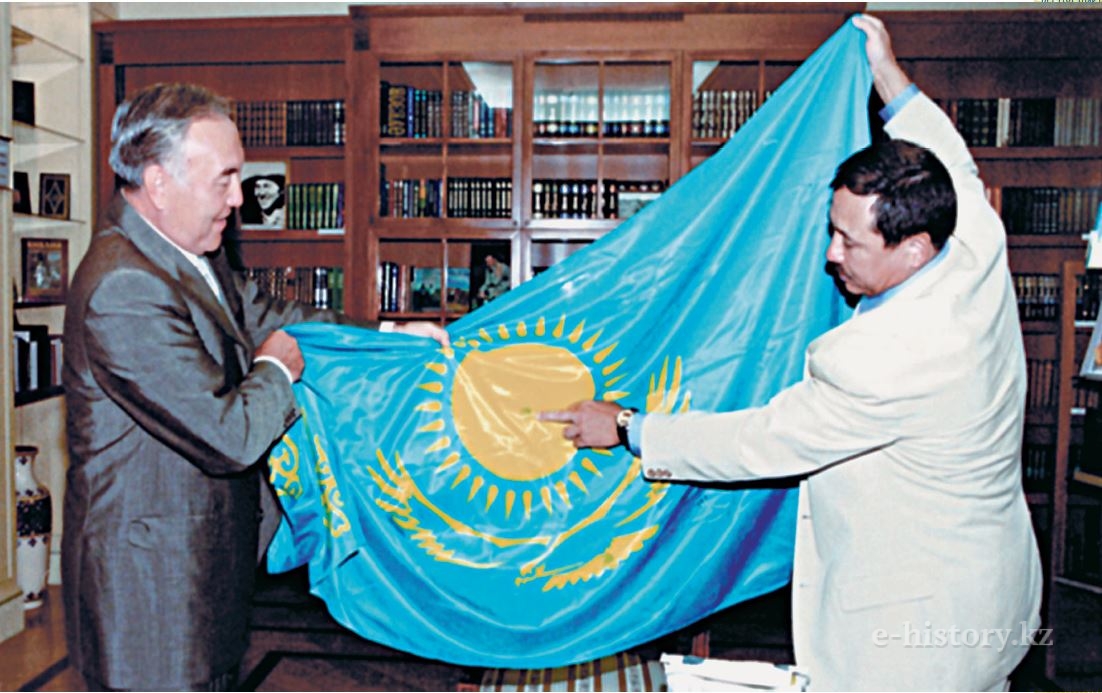 National Flag of Kazakhstan which has been in space

Materials on theme
THE GOLDEN HORDE IS NOT THE STATE?
Happy Constitution Day, Kazakhstan!
Address of the President of the Republic of Kazakhstan. Expert opinion – B. Tolysbaev
The moto expedition devoted to the 550th anniversary of the Kazakh Khanate