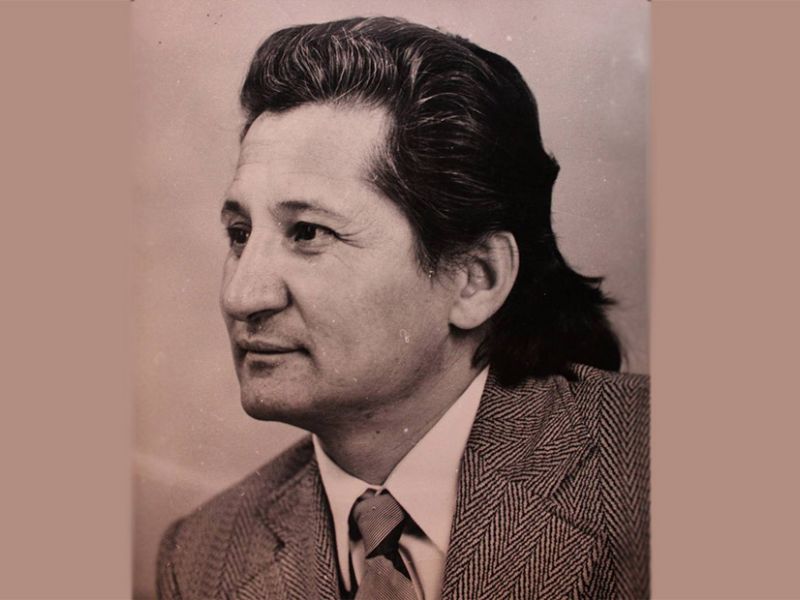 Kadyr Myrzaliev. Does his name not speak for itself? The akyn (poet and singer) wrote so many wonderful poems... He is the author of over 200 poems and song lyrics. He published his separate collection of works named "Kunder-ay". He also wrote prose and plays. 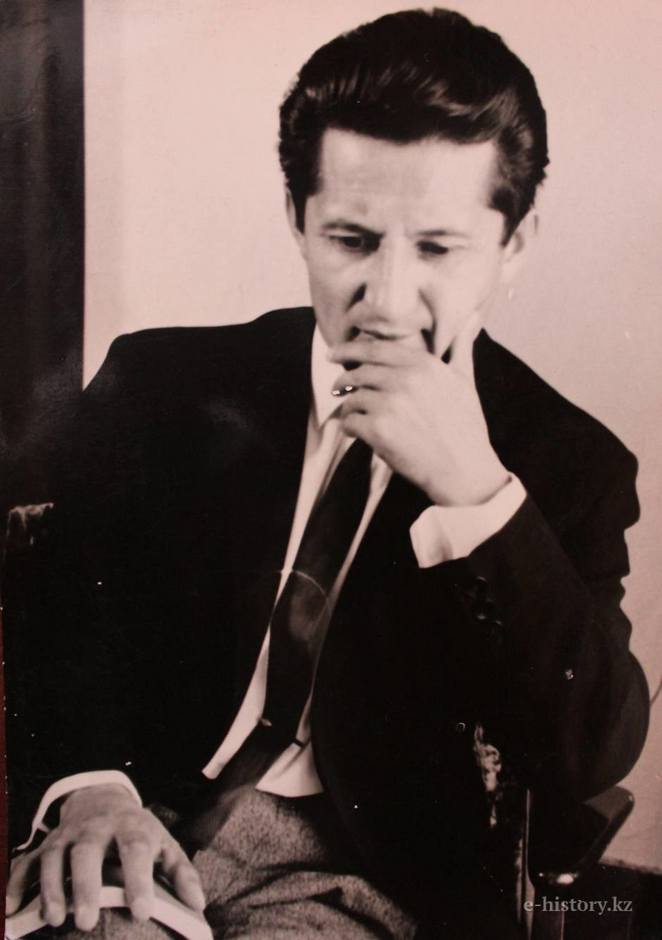 Rare photo of the akyn. Taken from the family archives

The akyn was born in 1935 in the village of Zhympity, Western Kazakhstan. As a child he experienced poverty; he was an orphan. In his diaries Kadyr Myrzaliev wrote the following: "A child who has become an orphan could learn Chinese hieroglyphs easily". Probably since that difficult period of life he had acquired respect of a sheet of paper. He even used to write on the back side of already covered with writing paper. He therefore saved it. 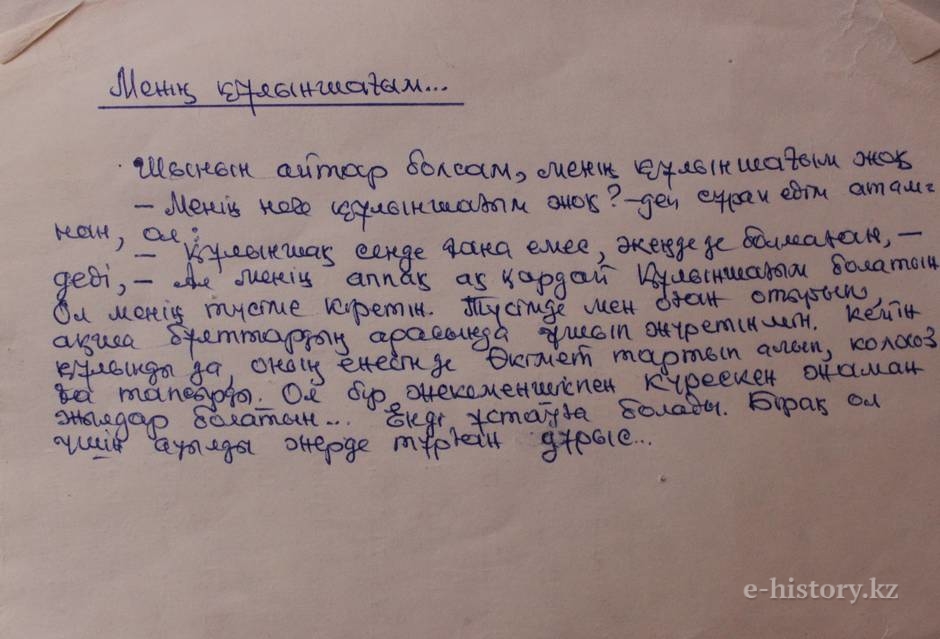 Handwriting of the writer

In 1958 he graduated from the Philological Faculty of the S. M. Kirov Kazakh State University and got a job in a newly opened magazine named "Baldyrgan" ("Kid"). It should be noted that he also worked productively in the magazine Zhuldyz ("Star") and Zhazyshy Publishing House ("Zhazyshy" means "Writer") together with the famous writer Iliyas Yesenberlin. By the way, his 100th anniversary is to be celebrated this year.

In 1966 the poet was awarded the Prize of the Lenin Komsomol of Kazakhstan (Komsomol was the All-Union Leninist Young Communist League) for his book "Oy Ormany" ("Forest of Thoughts"). It is interesting that, according to the writer, the book appeared as a result of strong self-discipline. "Returning from work I wrote my book at night; an iron discipline supported this work", — recalled Kadyr Myrzaliev. 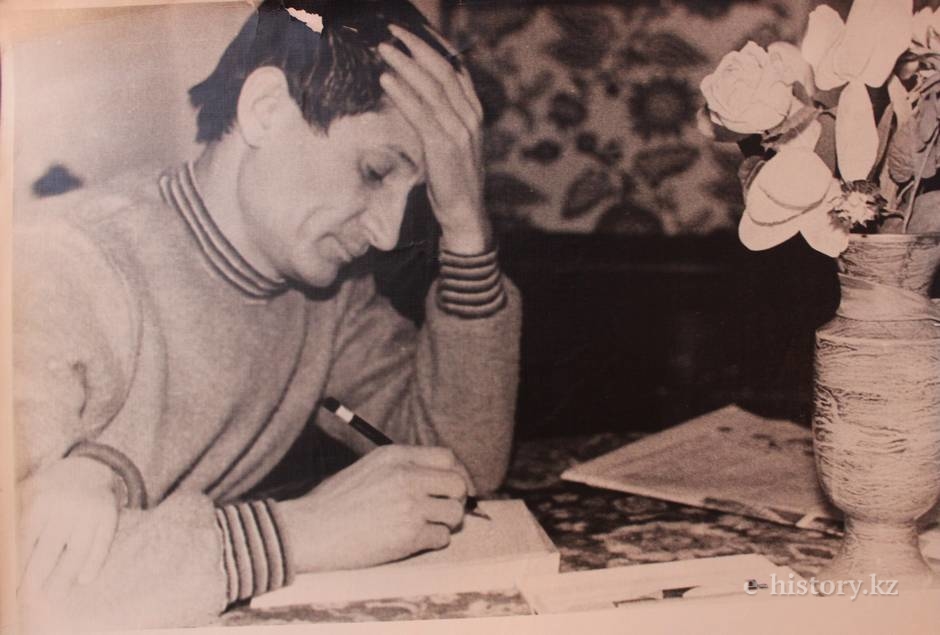 Kadyr Myrzaliev works on his book 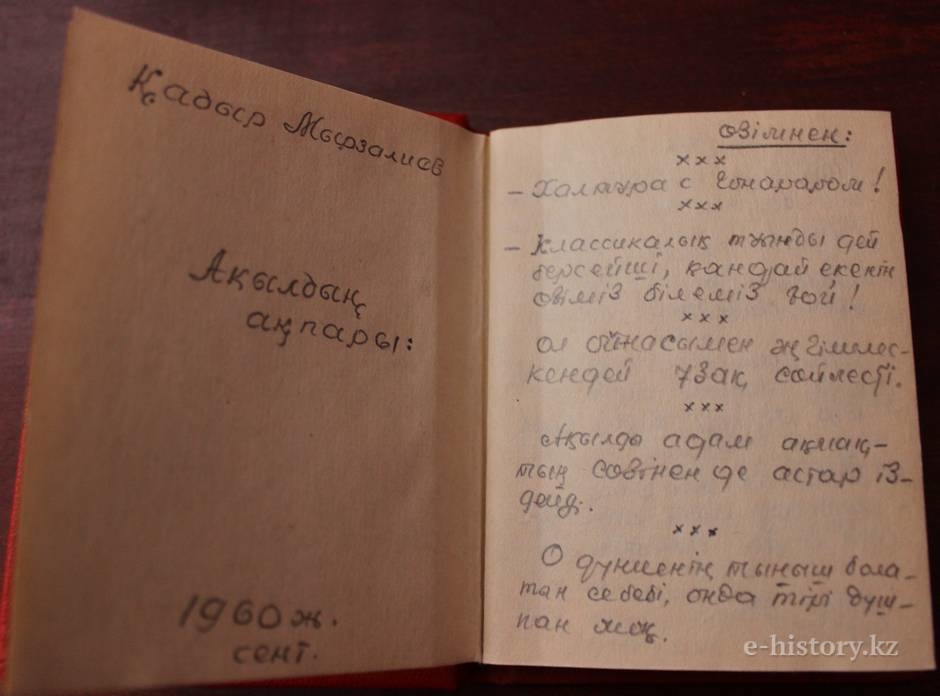 Kadyr Myrzaliev made a great contribution to the sphere of translation of fiction literature into Kazakh language as well. He translated the most famous works of world literature. Some of his poems were translated into English, French, German, Polish, Bulgarian and Finnish languages. The following books were published in Russian: "Insomnia" (1967), "White Yurt" (1968), "Garden of Nightingales" (1971), "Steppe Routes" (1975), "Your Home" (1976), "Upper String of Dombra" (1976), "Palms" (1984), "Lower String of Dombra" (1985). "Kumis Konyrau" ("Silver Bell") was issued in Uzbek, "Alakan" ("Palms") — in Kirghiz, "Bulbul Bagy" ("Garden of Nightingales") — in Azerbaijan, "Shymyr Zhangak" ("Strong Nut") — in Mongolian.

According to his widow Saltanat, Kadyr loved reading. He had collected around 7 thousand books and read all of them. Some books were reread two or three times. In declining years he wished to build a house where the books would be stored. Unfortunately, when the Soviet Union collapsed his money which he collected (85 000 roubles) depreciated in a moment and turned into nothing. Being a courageous man and real akyn he just didn’t pay any attention to these "conditions".

The years passed and the life gave Kadyr an opportunity to buy a house of which he dreamed. He had to pay 85 000 dollars.

Editorial Board of the web-portal "History of Kazakhstan" expressed the great gratitude to the writer’s widow Saltanat Myrzalieva for her assistance in the preparation of this article, family photos and memories.

Materials on theme
Will the Pharaoh's mummy get into the museum of Kazakhstan?
A Quick Glimpse Into Aktobe's History
Tours by the museum's halls
When Ancestors' Dream Came True