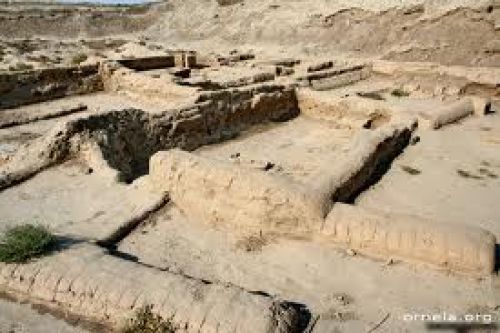 Otrar or Utrar; also called Farab) (ancient name is Parab or Farab (Persian: پاراب Parab‎) is a Central Asian ghost town that was a city located along the Silk Road in Kazakhstan. Otrar was an important town in the history of Central Asia, situated on the borders of settled and agricultural civilizations. It was the center of a great oasis and political district, commanding a key point connecting Kazakhstan with China, Europe, Near and Middle East, Siberia and Ural.

The city has a history of over dating back to the time of the Persian empire, when it was known as Parab. The older Persian Pārāb (in Ḥudūd al-ʿĀlam) or Fārāb (also Fāryāb and Pāryāb), is a common Persian toponym meaning “lands irrigated by diversion of river water”. By the 13th century, Fārāb on the Jaxartes was known as Otrār.

This section draws heavily from a UNESCO report.

Syr Darya played a special role in the life of Otrar and the whole region, and its waters were used for irrigation. They were also known for being abundant with fish and its shores were covered with rich vegetation and were also home to many birds and animals. Otrar is mentioned in numerous sources such as medieval Arab, Persian and Turkish authors. These sources refer to it as one of the Zhetysu (Seven Rivers) towns. The town was situated at the junction of different geographical landscapes and was at the intersection of the caravan ways of the Great Silk Road. Otrar, being at the junction of the two great rivers, was the center of the large agricultural region and, being near the foothills of the Karatau mountains, became one of the supporting fortresses of the nomads wandering in the steppes. From Otrar, along the Arys, roads spread out to Taraz, Balasagun and further on to the northern Tian Shan; along the Syr Darya an old road went up to Shash, Sogd and then to Merv and Nishapur, and another road went down to Pre-Aral and Ural. Another well known road ran through Kzylkum moving westward to Khorezm and on to the Volga region, the Black Sea and the Caucasus.

The oasis of Otrar is situated in the Kusulkum district of the South Kazakhstan Province. It is 170 km northwest of Shymkent and 60 km from Turkestan. In fact, the disasters and wars that passed over the town have done their part. Now, at the site of the once-prosperous town, there remain only ruins overgrown with grass. A person who first comes to the Otrar oasis is often surprised by the appearance of the numerous stark ruins of towns and settlements, castles and watchtowers. The main irrigation channels are now crossed with dried fields and their cracked beds have not held water for centuries.

The oasis of Otrar is not one single site, but rather it is a large oasis containing a series of towns and cities. Each hill formed in the place of ancient settlements has, at present its own name: Altyntobe, Dzhalpak-tobe, Kuyuk-Mardan-tobe and Pchakchi-tobe. In earlier times, they had different names that are now forgotten and only the names of the three towns known in manuscript sources may be identified at the present ruins.

In the 9th to the 10th centuries, various sources refer to Otrar as one of the Ispidjab towns. This is probably related to the fact that the city first submitted to the Caliphate and then to the Samanids. As before, Otrar remained the center of the district which occupied a space of "about one day’s journey in all directions“, which is many times mentioned by the chroniclers. The town is also known to have minted its own coinage. Otrar was the cultural center where Abu Nasr al-Farabi was born, and Aristan-Bab, an important representative of Islamic culture and teacher of Khoja Ahmed Yasawi, preached here.

There are records that portray the determination of earlier names of the town. It is thought that a group of coins collected in Otrar and some towns of the oasis date back to the time of these records. There is a generic symbol of the Turgeshi in the form of a bow on the face-side of such coins and the image of a lion on the reverse side. On a second type of coin, there is the sign X on the reverse side and these coins may originate from the mint of a local ruler. There is a suggestion that the coins of the second type were minted by rulers of the Turkish State of Kangu Tarban, the population of which were the Kangars, descendants of the ancient Kangui who founded the state with its center on the Syr Darya, then called the Kang River. Kangui existed from the 1st century B.C. until the 5th century A.D. First, Bityan town was the capital and later Kangui collapsed into several independent states mainly situated in the Syr Darya valley and its inflows of Keles and Atysi. According to the coins, in the 6th to 8th centuries, Kangu Tarban was ruled by a local dynasty of the Kangar Turks, and their capital became a Tarban town named Turarband that was later to be called Otrar. Since the times of the golden hordes, the ruins of Otrar have been attractive because of rumours about the treasures of the ancient rulers, and about buried piles of gold coins and jewelry. The source of such legends was perhaps confirmed by the archaeological finds of various coins and jewelry.

The prosperity of Otrar was interrupted by the Mongol invasion of Central Asia. In 1218 Genghis Khan sent to Otrar, and the Khoresmshakh Mohammed II's court, a trade caravan. The caravan was robbed upon arrival in accordance with orders by Mohammed to Inalchik Kair-khan, the governor of the town. He thought spies were secreted in the caravan. Through his envoy, Genghis Khan ordered that the guilty men be punished and that they give him Kair-khan. However, the khoresmshakh ordered his people to execute the Mongol.

In autumn 1219, Genghis Khan's troops approached Otrar walls. Shortly before, the Mongols appeared in Köneürgenç, the capital of the Khwarezmian Empire, where a war council had taken place and where one of the commanders proposed to open the battle against the Mongols. But Mohammed II chose another way. He dispersed his troops by garrisons throughout the towns, allowing the commanders to fight singly. The sources describe the defense of Otrar as follows:

...Before the Mongols came to Otrar town they had put marquees around the town. Sultan gave Kair-Khan fifty thousand people from the frontier troops and sent Karach Khodzhib to help him with more than ten thousand people. The citadel was fortified and a lot of weapons were collected for the troops. Kair-Khan made all the preparations to fight inside the town by placing the infantry and cavalry near the gates. He then ascended the wall and when he looked forward he bit his tongue because of his surprise by what he saw. As far as he could see the plain was full of a seething crowd and splendid troops while the air was full of shouting and noise made by the neighing of armored horses and the howling of chain-armored mules. The army settled itself around the fortress...

Despite a heroic defense of the city, its fate was sealed. The town was destroyed and its population was massacred and partially enslaved. Many of the towns in the oasis never recovered and were abandoned. However, Otrar city rose again and during the troubled years of civil wars, which followed Genghis Khan's death, the town again became an important political and economic center. By the middle of the 13th century it had returned as a large trade center on the way from the West to the East. During the second half of the 14th century Southern Kazakhstan was brought into the sphere of Timur's power. In February 1405, when Timur was visiting Otrar to gather his troops, he caught a cold and died in one of the Otrar palaces.

The death of Timur led to more struggles, which resulted in Abul Khayir conquering several tribes and placing himself at the head of a new Uzbek Khanate. Other descendants of Genghis Khan had claims over the area, and so for most of the 16th and 17th centuries there was non stop feuding among these various parties for power over the Kazakh steppe and the Syr Darya valley, especially between the Kazakh Khanate and Dzungar feudal lords. Even so, a degree of stability was maintained in Otrar up until the Dzungars arrived in Kazakhstan.

These followed a prolonged period of revolt, which resulted in the economic decline of the area and its towns. As the Eurasian arm of the Silk Road gradually lost its importance, so did the city. Through the 17th and 18th centuries, the irrigation system slowly fell out of use, and the lower part of the Temir-aryk dried out.

By the end of the 18th century there were only 40 families remaining in Otrar, compared to perhaps 5,000–7,000 in the 14th through 17th centuries, and the irrigated area had declined to about 5 square kilometres.

The area of the settlement is about two square kilometres. The lowest layers of the settlement are dated from the first century AD and the earliest monuments are dated from the 12th to 15th centuries. Otrar was a typical fortress for Central Asia. The Ark (central fortress) and Shahristan (fortified city) formed a five-corner hill about 18 metres of height. The area of the hill is 200,000 square metres. Excavations proved that it was an advanced town with monumental buildings. The town was densely populated: the houses stood close to each and formed the group of quarters or blocks. Two bath houses, dated from the 9th to the 12th centuries, were found on the rabat (suburbs) outside the city wall. The baths had central halls for bathing and massaging, rooms for undressing, restrooms and a prayer room. They had hot water supply systems. Dishes excavated near two furnaces help prove that Otrar was the center of ceramic production in Central Asia. The ceramics had elements of decoration. One of the greatest artifacts was the figure of water carrier – a camel with a woman's head and cradle on its back.