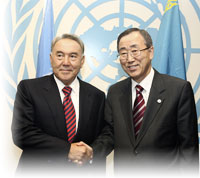 The United Nations is an international organization founded in 1945 after the Second World War by 51 countries committed to maintaining international peace and security, developing friendly relations among nations and promoting social progress, better living standards and human rights. The anniversary of the entry into force of the United Nations Charter on 24 October 1945 has been celebrated as United Nations Day since 1948. It has traditionally been marked throughout the world by meetings, discussions and exhibits on the achievements and goals of the Organization.

Over the past 19 years, the UN Agencies have provided significant support to Kazakhstan. They supported the drafting of a wide number of strategies, programmes and legislation dealing with macro-economic reform, social issues, improvement of health and environmental management. The most prominent of them is the long-term development strategy Kazakhstan 2030. The UN Agencies also carried out pilots and projects at local level.

Working within the United Nations System every agency has its own area of expertise, focus and mandate. The heads of these agencies form the UN Country Team (UNCT) led by the Resident Coordinator. The UNCT, drawing on the collective strengths of all agencies, funds and programmes, aims to make a strategic contribution to the achievement of national development priorities.