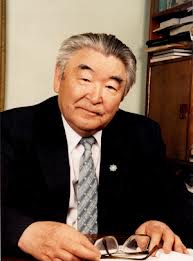 Academician Manash Kozybayev the rest of his life kept remained not with «spark», but with «reactor» in his soul which warmed, charmed and fueled with energy surrounding him people.

Precious stone has many faces. Which side does not look — seems the new side shining glare. Today we are once again turning to the scientific heritage of M. Kozybayev and discovering new facets of his work.
Each of us in certain extent get in touch with science, and understand in what extent this world requires self-commitment, hard work and constant aspiration to work.

Academician Manash Kozybayev the rest of his life kept remained not with «spark», but with «reactor» in his soul which warmed, charmed and fueled with energy surrounding him people. At the age of 70 years, he was a scientist, not only full of ideas, but also actively implementing them.

M. Kozybayev left a huge historical heritage, concluded in his writings that make him immortal author.

Multilateralism of M. Kozybayev’s research interest allowed to create own historical school and prepare a new group of talented scientists that includes about one hundred doctors and candidates of sciences (13 doctors and 85 candidates of sciences). Today they are the leading Kazakh historians, state and public figures. Among his students there are eminent scholars of China, Mongolia, Uzbekistan, Russia, university rectors, professors, deans and heads of departments of universities, officials of the Office of the President.

He was the author of about 800 scientific and popular scientific works, including 30 monographs and more than 50 collective works, textbooks and manuals in Russian and Kazakh languages.

Among the best known of his works are: «Kazakhstan: arsenal of the front» (Alma-Ata, 1970), «Gold fund of the party. From the experience of the personnel policy of the CPSU» (Alma-Ata, 1973)», «Past and present» (Alma-Ata, 1991), work in the name of Victory (Alma-Ata, 1995)», «Kazakhstan at the turn of the century: Reflections and searches» in 2 books (Almaty, 2000) and others. He led the development of fundamental academic papers on the history of Kazakhstan. His works have been published in Russia, China, Turkey, Korea, USA, Iran and many other countries.

His research interests can be compared with multicolored spring meadows. Starting his professional development by studying the contribution of Kazakhstan to the victory of the Soviet Union in World War II, he constantly expanded his interests. Over time, he managed to create a complete picture of the origins of the Kazakh people, their unique and hard fate in the twentieth century.

However, what unites and makes it looks as a single entity — it is patriotism. Through all of his scientific creativity permeates true love for people and Fatherland. The pain of loss, intolerance of injustice, pride in achievements and faith in a better future of the Kazakh people can be found in his works.

Active citizenship was always a distinguishing point of M. Kozybayev. And even in the Soviet era, he dictates his rigid rules. He raised the most pressing issues relating to the conversation of the national identity of the Kazakh language and culture

Academician M. Kozybayev always distinguished active citizenship, and even in the Soviet era, to dictate its rigid rules, he raised the most pressing issues relating to the conservation of the national identity of the Kazakh language and culture, the development of the nation as a whole, attracted to the debate about the spiritual development of the nation’s authoritative representatives creative and scientific elite of Kazakhstan.

In the book «Golden Fund of the Party», written in 1973 in collaboration with Zoya Golikova, it was noted that the movement of personnel in the country is carried out from the top, from the center. In fact, the personnel policy was in stagnation, when the secretaries of regional committees were not changed in 20–25 years.

Monograph was banned and confiscated. As a result, M.Kozybaev received a reprimand from the party. He was excommunicated from the research work and forced to go to Alma-Ata Veterinary Institute for pedagogical work, where historians were kept. His attempts to uncover and remove drawbacks of society were stopped by the party. The massacre on the book further repulsed researchers desire to engage in human resource issues in the country.

However, difficulties that he had to face did not stop him. He continued to work actively. In 1986, M. Kozybaev was awarded the title of Honored Scientist of the Kazakh SSR [1, p.281].
The period of perestoika (restructuring) indeed was the great opportunity to discover unexplored layers of history of Kazakhstan for the scientist.

History has become an effective tool in the formation of national consciousness and spiritual revival of the Kazakh people in the period of breaking the old and creates a new system of social values. With the independence of Kazakhstan new horizons opened up for national historical science.

It went out from purely academic framework and become actively involved in the formation of the new worldview. The beginning of change in public life highlighted the historical research, free of ideologisation, Eurocentrism, the class approach and partisanship. Since independence, historical science has raised a huge reservoir of national history has not previously claimed and forgotten. Elimination of «white spots» in the history of Kazakhstan, the study of the national liberation movement and the Kazakh state, defining the place and role of Kazakhstan in the world Eurasia contributed to the formation of historical consciousness and the progressive development of society. Deep study of the historical process was aimed to maintain political stability, spiritual unity and inter-ethnic harmony.

M. Kozybayev his views on the role of history in shaping civic patriotism justified with the formation of a national idea: «As a national idea, which is to ensure the normal functioning of society, put forward the idea of strengthening civil peace and interethnic accord, the idea of the nationwide and common Kazakh patriotism.
Fully emphasizing the idea of national patriotism, in our opinion, should be more widely and more deeply explore the origins of the Kazakh national patriotism, which has become an integral part of people’s mentality. We emphasize this aspect because the Kazakh people have a special responsibility in the formation of common Kazakh patriotism and national idea of strengthening civil peace and interethnic harmony» [2, p.323].

At the same time, scientist understood that radical patriotism, which relates with chauvinism, was unacceptable.

In a review of President Nursultan Nazarbayev’s work, «On the threshold of the twenty-first century», he said: «It should be said that national interests are not the subject of buying and selling, and love for the national should not develop into a rabid nationalism. The author is absolutely right when he says etno-populizm virus on the healthy body of our society» [3, p.368].

M. Kozybayev in his work, explaining the origins of genesis, outlined two types of nationalism: belligerent and defensive. In the first case — nationalism is close to chauvinism and has destructive and aggressive character, in the second case it close to patriotism, as defense the interests of its nation and has positive meaning.

The problem of the Kazak state took a great place in the formation of national consciousness. Manas Kozybayev scientifically proved the rights of Kazakh people on national statehood, as Kazakhs were one of the ancient people of Eurasia.

Scientist had done a great job of defining the role and place of the country in world space and its development prospects.

He proved that the anti-colonial uprising of protectorate period of Russia in Kazakhstan is links in the same chain — the struggle for national independence, the Kazakh people, where the uprising of 1916 is its apogee.

Thanks to his works, the names of the leaders of the liberal-national intelligentsia became widely known. Names Alikhan Bukeyhanova, Akhmet Baitursynov Makzhana Zhumabaeva, Myrzhakypa Dulatov, Mukhamedzhan Tanyshpaev, Mustafa Shokai and others were rehabilitated.

He used to be called humanist scholar, chronicler of the people and the herald of independence. M.Kozybayev made an enormous contribution to the development of historical science, the formation of historical consciousness and a sense of national dignity.

Defining facets of the phenomenon of M. Kozybayev his colleagues noted one of them. It is the universal popularity, which was achieved through convergence of academic science with people’s environment. Salyk Zimanov emphasized: «… the chasing the task of pursuing the patriotic education of Kazakhs to experience their own long history, academician M. K. Kozybaev often expressed his vision of historical processes in the „mass“, „national“ style that is accessible and understandable to the masses» [6, p. 10].

He also had another rare talent — speak and write very elegant both in Russian and Kazakh languages.

Being a patriot of his people and the country, he saw history not from the height of the bumps generic, but far beyond the narrowed national understanding, in the context of world history.

Calling to keep the continuity of generations through knowledge of true history, M.Kozybaev supported common sense of criticism and avoided following opportunistic request and social order.

In the last article, «Monologue of the Fatherland» M.Kozybaev called the period of independence of Kazakhstan «Renaissance», emphasizes its natural connection with the previous story, which is part of the history of world civilization.

He believed that independence is main achievement of any people, as it gives scope for the implementation of their own programs and projects. His last words, which reflected a better future for his people and fatherland, were: «And so the independence — our main slogan of our blue flag, our future well-being and happiness of our upcoming bright dawn! Blessed be our independence, our nation, tall and strong in spirit, let the people of Kazakhstan be great, and the state itself — a prosperous and rich. Let our country will be the best of the many, that it equaled the other countries and peoples, dear friends!» [5, p. 268].

M.Kozybayev’s dreamed to fulfill his duty to the people. Throughout his life and work he carried out his great mission.

As the legacy he left us his works and farewell, which today has great importance in the study of the history of Kazakhstan and education of Kazakhstan patriotism.

2. M.Kozybayev, Kazakhstan at the turn of the century: reflections and searches. In 2 boos, Almaty, 2000.

Materials on theme
Kazakhstan’s historical and demographic processes in researches of M.K. Kozybayev
Kazakhstan’s population in 1917-1939
Changes in the ethnic composition of Kazakhstan in 1940-1958
Demographic situation in the Republic in 1959-1989