Home History of Kazakhstan Overcoming of mass illiteracy of the population and development of national education.

Overcoming of mass illiteracy of the population and development of national education. 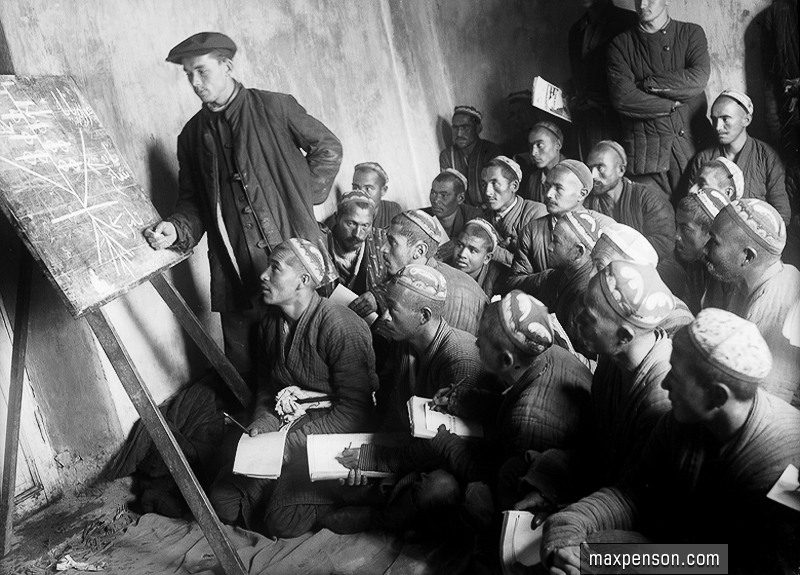 At the beginning of the XX century the bulk of the population of edge wasn't able to read and write. Therefore at once after revolution schools and courses for training of adults began to open. In November, 1917 Auliye-Atinsky" city council of workers and soldier's deputies, having considered a question of the organization of school of literacy, I decided to allocate for these purposes necessary financial funds. At the beginning of 1918 of school for the illiterate opened in True, Semipalatinsk, Akmolinsk and other places where there were corresponding material conditions and cultural forces.

In 1920 at local departments of national education the extraordinary commissions on illiteracy elimination which were engaged in the organization of the account illiterate, preparation of pedagogical shots, the organization of courses and schools, the edition of manuals were created. Later this work was carried out by local offices of the All-Union society "Down with Illiteracy". "Something ephemeral", "three-day's rests", "months" was everywhere carried out, lectures were given, discussions were led.

In overcoming of heavy heritage of the past the greatest activity was shown by youth. On its initiative in 1928 I passed "a cultural campaign", become subsequently an effective form of fight against illiteracy.

Elimination of illiteracy took place in hard conditions: there were no means, there were no teachers, textbooks, grants, writing-materials. Business became complicated also unreasoned alphabetic reforms. In the late twenties the Kazakh writing was transferred from the Arab graphics on Latin, in ten years — with Latin to modern Cyrillics. Thus, the same person was three times trained in the initial diploma.

In the second half of the 30th there were areas, collective farms and state farms of continuous literacy. In 1939 level of literacy of the population of Kazakhstan reached 83,6%. Completely the Great Patriotic War prevented to eradicate alphabetical illiteracy.

After war this work was resumed and accepted wide scope in the 50th years in connection with arrival from the People's Republic of China of tens of thousands of Kazakh repatriates. B1959 of of 12 thousand teachers of the republic, making use of experience 20 — the 30th, participated in actions for an educational program. Finally elimination of illiteracy came to the end by the end of the 60th. In 1970 as a part of the population of Kazakhstan the share of the illiterate made only 0,3% against 3,1% in 1959.

After revolution in Kazakhstan there was qualitatively new, 1 system of the national education which main principles were defined by Situation VTsIK of October 16, 1918. "About uniform labor school" and the resolution Narkomprosa of RSFSR of October 31, 1918. "About schools of ethnic minorities". Huge thirst for knowledge was shown by a people at large. With big interest they participated in a construction of schools, boarding schools, providing pupils with the school equipment, educational writing-materials, in social arrangement of the teacher's intellectuals.

Mobility of the Kazakh nomadic population demanded creative approach to the organization of school business. There were schools with hostels, the number of elementary schools considerably grew. By the beginning of the first five-years period in the republic 3747 elementary schools against 1953 in 1914/15 educational functioned. In them more than 90% of all school students of the republic were trained.

However, material conditions of the majority of schools ostavalistyazhely. Many Kazakh children didn't attend school. By the end of the recovery period among 233 thousand pupils 70,8 thousand children of Kazakhs, or 30,4% were only. Coverage of children of school age of radical ethnos by elementary education made 18%.

The new stage of school education began since 1930 when the initial general compulsory education was entered. The Komsomol of Kazakhstan established patronage of a general compulsory education. Komsomol members organized repair of school rooms, were engaged in providing children with footwear, clothes, hot breakfasts, held community work days and voskresniks. The edition of textbooks and methodical literature increased. B1930 of for elementary schools was published 12 names of textbooks with a general circulation of 555 thousand copies, in 1932 — 22 names with a circulation of 948 thousand pieces.

However development of secondary and incomplete secondary education lagged behind. On the eve of war the share of seven-year and high schools didn't exceed 1/3, formation of the Kazakh high school was tightened. Only in 1935/36 уч. to year the first eleven children of Kazakhs graduated from high Kazakh school.

The totalitarian mode ideologized school. Textbooks, the party, Komsomol and pioneer organizations, teacher claimed in consciousness and behavior of young generation of dogma of Stalinism. School functions were distorted also. In the second half of the 30th, for example, all work on strengthening and development of the Kazakh school submitted to a task of gap destruction "between requirements of technical schools and higher education institutions for the Kazakh contingents and releases from high Kazakh school".

Difficulties of school education extremely became aggravated from the Great Patriotic War beginning. The educational material resources weakened, the part of teachers and seniors went to army or on production. During 1940/41 — 1945/46 уч. years the number of pupils was reduced on 30, teachers — by 14%".

Priority of school education in the 50th гт. there was an implementation of general seven years' education, in the 60th — eight-year-old, and in the 70th — the general average. The great value was attached to involvement of Kazakh girls in schools. Search of ways and forms of connection of training with productive work proceeded. In 1984 school reform on transition to training of children began with six-year age, to educational material resources creation for labor training, to inclusion in the training program of new subjects.

At the same time in development of school education shortcomings accrued. Party dictatorship over school accrued. The ideologizing of teaching and educational process was added with a pursuit of gross indicators, formalization of educational process, indifference of pupils to study. The deetnization of school education amplified. If in 1948/49 уч. to year of 48% of schools of system of the Ministry of Public Education of the republic were Kazakh though children of indigenous people made 36% of all pupils, in 1955/56 уч. to year of 43% of comprehensive schools functioned in Russian with coverage of 66% of the pupils, more than 100 thousand Kazakh children attended the Russian schools. In 20 years (1950 — 1970) purely Kazakh schools it was reduced with 3891 to 2577 whereas the number of the Russian schools with teaching in Russian increased by 1,5 thousand. In 1989/90 уч. to year of 49% of comprehensive schools of Ministerst of national education of Kazakhstan where 67% of pupils studied, conducted training in Russian, 32% of schools — in the Kazakh language.

Pre-revolutionary Kazakhstan had scanty number of professional educational institutions — in seven technical schools and schools 352 persons were trained. They didn't make and 1% of total number of students of Russia. If on the scale of Russia three pupils of average special educational institutions fell on 10 thousand people of the population, in Latvia and Lithuania — 5,6 in Russia and in Ukraine — 4, in Kazakhstan only 0,5. Shots of the top skills prepared outside edge.

The first transformations after revolution revealed an acute shortage of shots of experts. Concrete measures were taken for a solution on places. The resolution of Semirechensky regional council in March, 1918 in. True Semirechens-koye agricultural school on 22 pupils was created. On October 30, 1918 the Semirechensky regional commissariat of education informed on opening on November 10, 1918 Muslim teacher's seminary in. True as a part of two preparatory and one main class with granting a grant to the most needing. B1919 — 1920 in Orenburg and Semipalatinsk opened institutes of the national education, the 1st shock technical school of the highest type with a three-year course. However it became clear soon that the youth has no sufficient preparation for study in professional educational institutions. In this regard working faculties were organized. The first workers' faculty of Kazakhstan opened in 1921 in Orenburg.

Absence in necessary quantity of professorial shots, the economic ruin, slow lifting of school education detained process of the organization of the higher school in Kazakhstan until the end of the 20th. In days of the first five-years period KAZPI of Abay, veterinary and zootechnical, agricultural, medical institutes in Alma-Ata, teacher's college in Uralsk, prospecting institute in Semipalatinsk opened. In 1931 KAZPI of Abay ended the first 53 студента13.

Higher education institutions and technical schools of Kazakhstan, despite high rates of development, didn't satisfy need of a national economy for shots as many of them were at the formation stage, some were simply dwarfish. As a part of students and professorial shots the number of representatives of indigenous people slowly grew. In 1936 from 42 teachers of KAZGU there were only 8 Kazakhs. In 1940 among students of Almaty veterinary and zootechnical institute the specific weight of Kazakhs made only 12%. Problems of the higher school were aggravated with the Stalin repressions which have carried away lives of outstanding scientists and teachers of A.Baytursynov, S. Asfendiyarova, X. Dosmukhamedova, T.Zhurge-neva, U.Dzhandosova, etc.

However in all republic otraslyakhnarodnogokhozyaystvo in the first post-war years the acute shortage of qualified personnel was felt. In the 50th years 13 institutes opened: zooveterinary and medical in Semipalatinsk; medical, polytechnical and pedagogical in Karaganda; teacher training colleges in Gurjev, Kustanai, Chimkent, etc.

In the 60th — the 80th 27 more highest and over 100 averages of special educational institutions, i.e. almost as much, how many for all previous period opened. The list of specialties on which shots prepared increased also. In 1986 in 55 higher education institutions both 246 technical schools and schools 550 thousand students and pupils on more than 200 specialties) were trained. Scales of changes are well visible on a comparative and comparative background: in only two years (1978 — 1979) higher education institutions and technical schools let out so many experts, how many within the 50th.

Defects in material support and personnel capacity of the higher school were reflected in quality of training of specialists. But the greatest damage to business was caused by the ideologized policy of the party and state structures concerning professional educational institutions. Persecutions and repressive measures against scientists, the high school workers, begun in the 20th, proceeded to Stalin's death. And further life of the higher school was under construction on the principles of party membership and a klassovost. Therefore contacts and communications of universities, institutes and technical schools with similar educational institutions of the countries of nonsocialist camp had symbolical character. Contents of many training programs, grants and textbooks weren't focused on development of independent creative thinking, on studying of the latest developments of science, equipment and technologies. When completing the personnel and student's case the bribery, a traybalizm and other forms of social injustice was allowed.

Use of materials for publication, commercial use, or distribution requires written or oral permission from the Board of Editors or the author. Hyperlink to Qazaqstan tarihy portal is necessary. All rights reserved by the Law RK “On author’s rights and related rights”. To request authorization email to mail@e-history.kz or call to 8 (7172) 57 60 13 (in - 1163)
Қазақша Русский English
MOST READ
Month Year
Recorded history of Kazakhstan. Part 2
Heroic mothers of the great steppe
How had the World War II been started?
Philosophy of the Emblem
14 monuments at Tekturmas
The rural akims: the country's hope is in the elections
Kazakh historical drama Tomiris premiered in Istanbul
Stolypin about the worries and hopes of immigrants to the Kazakh steppes
ALASH IDEA IS THE PROTECTION OF KAZAKH STATEHOOD
A tireless explorer of the Kazakh land
SWITCHING TO THE LATIN ALPHABET – UNITE ALL KAZAKH PEOPLE
Kunaev Dinmukhamed Akhmedovich
People who eat horses will kill you
Materials on theme
Modern cultural processes.
Fiction.
Establishment of the Bukey Provincial Department of National Education (based on archival materials)
Formation and destinies of the national intellectuals.