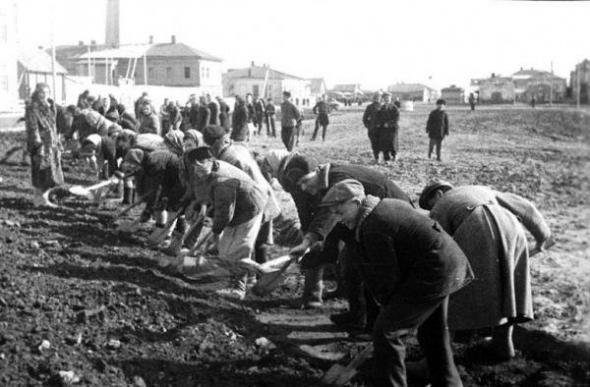 The contribution of the home front to the victory in the Great Patriotic War was significant and priceless.

The Great Patriotic War, which began just over 70 years ago, was not only one of the most considerable examinations of modern history but also the reflection of the best characteristics of a whole nation, the front and the rear. Back areas along with the front made a significant contribution to the victory in this war. Workers and ordinary people at the deep rear, who lived in accordance with the principle "Everything for the front, everything for the Victory", imperceptibly but selflessly brought the country closer to the victory. Undoubtedly, Northern Kazakhstan was a representative of such home front.

The news of the beginning of the Great Patriotic War (for the first time it was so called by Stalin on the radio) stirred people and provoked concerns about future burdens and faithful resentment at enemy deprived millions of families of peace and calm and brought sorrow and tears. Meetings held in the North Kazakhstan region on June 23-24 1941 were not only implementation of instructions from above but also sincere reflection of current threat to the country [1, p. 15].

People from urban and rural areas of Northern Kazakhstan as well as dwellers of other corners of eastern part of the country were involved in working (initially, recruiting from Central Asian district was not conducted, only draftees of 1941 went to the front) and later in military permanent watch lasted almost 1500 days and nights.

The Resolution № 121 of the Northern Kazakhstan Regional Committee of the Party dated from 25 June 1941 adopted events "on launching mass defensive work and preparation of mass qualifications" [2, Page 109]. It certified that "to achieve the victory over Fascism in the Great Patriotic War the intensive mass defensive work on preparation of mass qualifications plays a key role". Secretaries of district and city committees of the Party were obliged to revise forms and content of activity of the OSOAVIAKhIM (Union of Societies of Assistance to Defence and Aviation-Chemical Construction of the USSR) and Red Cross on the basis of the principle of encouraging workers of all enterprises, institutions, collective farms and machine and tractor stations to receive military training" [3, Page 109].

In July-August 1941 the secret and complete mobilization was conducted in North Kazakhstan region in accordance with the Order of the Military Council of Central Asian Military District [4, Page 97].

In addition to the personnel the Red Army obtained substantial number of horses, harnesses and vehicles.

Very soon this region started receiving first evacuated enterprises and people. In the second half of 1941 the city of Petropavlovsk and the region received twenty evacuated plants and factories, including those of national significance [6, С.20].

According to the resolution of the Council of People’s Commissars of the USSR on production of munition dated from September 2, 1941, several factories in Petropavlovsk city were obliged to start producing sea-mines "Zab-500-300 TSh" and manufacture 100 pieces in September and 1000 pieces in October and November.

To receive evacuated hospitals fourteen places in Petropavlovsk city were cleared and given to these medical institutions.

For the first time military operating units were created from June 27, 1941, when "the 702nd building battalion with full set of equipment and personnel according to the staff list for wartime was established in Petropavlovsk" [7, p. 15].

On September 6, 1941 the 314th Infantry Division took its first fight near Leningrad city (modern Saint Petersburg) and protected their positions on the Svir River [9, p. 17].

Sometimes, going to the Red Army people didn’t have appropriate clothes and shoes.

On August 13, 1941 the joint Decision of the Regional Committee of the Party and the Regional Executive Committee set the task for workmen’s cooperative associations of the Regional Industrial Union and the Kazakh Disabled People Cooperation Union to sew uniform. No later than September 20, 1941 the region had to sew 1800 overcoats, 2820 soldier’s blouses, 23340 cotton trousers, 3340 cotton quilted jackets, 19900 under skirts, 36000 drawers and 36000 field caps [10, Pages 68-69].

Thus, the contribution of the home front to the victory in the Great Patriotic War was significant and priceless. Many dozens of thousands of patriots of Northern Kazakhstan brought the country closer to the victory over Nazism by their selfless labor.