Changes in «special contingent» during the Great Patriotic War 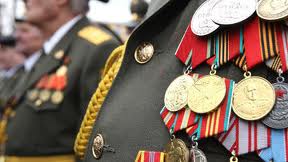 The Great Patriotic War changed the lives of all the people of the Soviet Union, millions of people went as volunteers for the war, heroically worked at the rear, contributing to the Great Victory.

The Great Patriotic War changed the lives of all the people of the Soviet Union, millions of people went as volunteers for the war, heroically worked at the rear, contributing to the Great Victory. That War was severe trial of unity soviet nations, their readiness to defend the freedom and independence of the Soviet Motherland. Despite all the hardships of forced industrialization, collectivization and mass repressions, under the slogan of struggle against «enemies of socialism», the country’s population, for the most part, retained belief in socialist ideals and slogans, as well as faith in the country’s leadership [1, 146].

At the same time there were hundreds of thousands of people who faced this war in prisons and the institutions of the GULAG (Main Administration of Corrective Labor Camps) of the NKVD, as a part of the so-called «special contingent». 7899 people of 315584 prisoners of GULAG’s camps were in Kazakhstan [2, 12]. As of 1 March 1941, the USSR had 492 prisons and 438 819 prisoners, including 21 prison and 13657 prisoners in Kazakhstan [2, 11, 12]. Their number increased when at the first period of the war 27 camps and 210 settlements of the GULAG with total number of prisoners 750,000 people were evacuated from areas threatened by the Nazi occupation. Labor settlers were evacuated to Kazakhstan from the Ukrainian SSR; they were settled in Karaganda region [3]. As for the first quarter of 1941 10 regions of Kazakhstan were inhabited by 180,015 labor settlers, most of them in Karaganda region (87,787 people) [4].

The war changed the life in camps: like industrial workers prisoners of work camps obtained uninterrupted workweek. At the beginning of the war Karlag (Karaganda camp) administration received from number of GULAG’s orders on prisoners isolation, security strengthening, loudspeakers requisitioning, prohibition to distribute newspapers, increase of working hours up to 10 and production rate to 20% [5, 7–8].

«Special contingent», in 1920–1930-s formed by prisoners and dispossessed special resettlers, due to the huge losses of the first months of the war became one of the sources of the Red Army’s reinforcements: by the Decrees of the Presidium of the Supreme Soviet of the USSR dated July 12 and November 24, 1941 prisoners convicted for truancy, domestic and minor officials and economic crimes were released early and were recruited to the Red Army. GULAG released 420 thousand prisoners [6, 24–25]. These people obtained the possibility to «redeem» themselves by participating in the fight against fascism.

Since April 11, 1942, when the Resolution of the State Defense Committee № 1575 сс was adopted, it was permitted to recruit former kulaks (prosperous peasant farmers), although before, according to the Order of the Main Directorate of the Red Army № 22/181387 dated February 17, 1940, they were not drafted into the army [7]. Mobilization of working settlers at the end of 1941–1942 provided recruitment of 60747 people, including 11294 from the Kazakh SSR [8].

The war decreased the number of people in «special contingent» but these losses were compensated by new sources. Since the first day of the war discharging of those convicted for parricide, espionage, terror and sabotage; trockists and right-wing; convicted for brigandage and other especially grave state crimes was stopped. The number of people who were held guilty of counter-revolutionary and other especially dangerous crimes increased more than 1.5 times. The total number of those, whose discharge was postponed before December 1, 1944, was 26 thousand people. In addition, approximately 60 thousand people with finished term of imprisonment were forcibly retained in camps to be civilian employees [6, 23].

The war also caused the need for organization of «labor front» at the rear. When military operations loomed large and substantial part of the territory of the USSR was occupied by the enemy the urgent need for rapid establishment of new facilities of the defense industry arose. Drawn-out war required sharp increase in the production of ammunition, shells, mines, artillery, tanks, aircraft and other equipment [9, 529]. One part of the «special contingent» which could not be sent to the war was used for forced work, reinforced «labor army». According to Knyshevskiy P.N., the State Defense Committee mobilized manpower for alternative service (labor front) from deported nations, people with unfit for military service health conditions, demobilized from the army, GULAG’s contingent and internees [10].

Several labor sub-units were established, including building (working) battalions, Special construction and installation units and working groups. During the Great Patriotic War the NKVD organs established building (working) battalions of soldiers of the Red Army, who had relatives abroad or lived there, was surrounded or captured, lost military or Party documents, demonstrated anti-Soviet behavior, was convicted before or had contacts with deserters.

So-called working groups were established during conducted by the NKVD of the USSR mobilization in 1942–1944 and included citizens of those nationalities, who fight against the USSR, including Germans, Finns, Romanians, Hungarians and Italians. These groups were created in accordance with the Resolution of the State Defense Committee № 1123 сс dated January 10, 1942. In total more than 400 thousand people were mobilized to these groups, including also approximately 20 thousand representatives of other nationalities (Chinese, Koreans, Bulgarians, Greeks, Kalmyks and Crimean Tatars). 220 thousand mobilized people were used at construction and the NKVD camps and 180 thousand — at objects of other people’s commissariats [6, 24].

Building (working) battalions and Special construction and installation units reorganized into building or working groups formed «labor army» formed both of civilians and forcibly mobilized for labor front. At the same time, the greater part of that army consisted of special resettlers and deported to the territory of Kazakhstan. Main Camp Directorate accommodated, guarded and used for works this contingent.

In 1941 in two more categories of internees and prisoners of war appeared in «special contingent». Since the beginning of the Great Patriotic War on the territory of the USSR all civilians-subjects to other states were interned. Interned people as well as prisoners of war were accommodated in camps of the GUPVI (Main Administration for Affairs of Prisoners of War and Internees) NKVD-MIA of the USSR [11, 17]. For this purpose in June-July of 1941 in Karaganda and Aktyubinsk region two camps were established. By the end of 1941 9 thousand people were under the control of the UPVI (Directorate for Prisoners of War and Internee Affairs) NKVD of the USSR. The number of prisoners of war increased since 1942 after encirclement near Stalingrad [12, 14].

On April 22, 1943 the Decree of the Presidium of the Supreme Soviet of the USSR «On sentences for traitors to Motherland and betrayers and on establishing of hard labour as punishment for these individuals» was adopted. Thus the legal basis for the emergence of another one category of convicts was created.

According to the Decree of the Presidium of the Supreme Soviet of the USSR «On the penalties for German-fascist villains responsible for the killings and torture of civilians and the Soviet Red Army prisoners, for spies, traitors to Motherland among Soviet citizens and their accomplices» dated April 19, 1943, extreme penalty — death penalty could be replaced with hard labor for the term of 15 to 20 years [13, 123]. To support these kinds of special contingent during the war and after its completion Kazakhstan hosted 14 camps of the NKVD-MVD of the USSR, including 4 in Central Kazakhstan, operated for prisoners of war and internees [11, 18]. The first echelon of prisoners of war in the amount of 1436 people arrived to Spassky Special Camp in August 1941 [14].

Since 1943 internees and prisoners of war started be used as labor force in camps but the productivity began to raise only in 1947–1948 and by 1949 the GUPVI (Chief Directorate for Prisoners of War and Internee Affairs) camps became completely economically rational [11, 19–20]. Thus, during the war the labor of special contingent of GULAG, where Soviet citizens instead of GUPVI contingent lived, offered the greatest payoff.