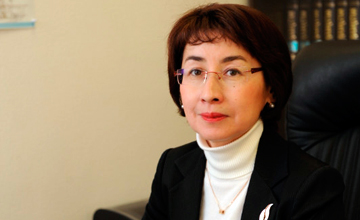 Around one million of Kazakhs, escaping from Bolshevik collectivization and the following hunger, came outside their Motherland and fought to cross the boundaries.

Around one million of Kazakhs, escaping from Bolshevik collectivization and the following hunger, came outside their Motherland and fought to cross the boundaries.

Mass outcome movement of Kazakh people in many regions of the Republic was one of the forms of mass protest and Sharua’s opposition against collectivization as well as rescue from hunger. Outcome not only to other regions but also abroad, including China, Iran and Afghanistan, started with the beginning of collectivization and confiscation. Approximately 400 thousand farms, i.e. not less than 75% existing be the end of 1920-s nomad and seminomad farms, migrated from Kazakhstan. According to the internal document of United State Political Administration «About the migration of Kazakh farms to China», worked out on the basis of materials as of January 1, 1930, outlined that «directives concerning migration of people to China, before confiscation of farms of wealthy Kazakhs and in connection with confiscation, were made by Kazakh nationalists, considering this measure as one of the methods of stock-raising farms protection from bankruptcy, which is delivered to the steppe by Soviet policy. For the whole 1929 129 wealthy, 128 peasant and 165 poor farms migrated to the territory of China. In total there were 416 farms. 739 people with wealthy farms, 474 — with peasant, with poor — 132 and in total 1845 people went. During the year 250 farms with 17577 heads of cattle or 26,4% in regard to the total number of those who tried migrate were stopped by Boundary Guards».

Armed rebellions of peasants and Sharua also accompanied with outcomes. The significant part of rebellious auls of Balkhash, Chokpar, Ili, Yenbekshikazakh, Bien-Aksuy, Sarkand, Jarkent and Baribay districts of Alma-Aty circle appeared on the territory of China

Special report of Alshansky, Deputy Plenipotentiary Representative of United State Political Administration in Kazakhstan, of December 22, 1930 informed about external and internal migrations of Kazakh people from border districts of Alma-Aty and Semipalatinsk circles to China.

Thus, approximately one million of Kazakhs, escaping from Bolshevik collectivization and the following hunger, came outside their Motherland and fought to cross the boundaries. Only a half of them return to their native land.

First Deputy Director of the Institute of History of State,
Doctor of Historical Sciences (the Republic of Kazakhstan)

Use of materials for publication, commercial use, or distribution requires written or oral permission from the Board of Editors or the author. Hyperlink to Qazaqstan tarihy portal is necessary. All rights reserved by the Law RK “On author’s rights and related rights”. To request authorization email to mail@e-history.kz or call to 8 (7172) 57 60 13 (in - 1163)
Қазақша Русский English
MOST READ
Month Year
Kazakh historical drama Tomiris premiered in Istanbul
ALASH IDEA IS THE PROTECTION OF KAZAKH STATEHOOD
Stolypin about the worries and hopes of immigrants to the Kazakh steppes
A tireless explorer of the Kazakh land
SWITCHING TO THE LATIN ALPHABET – UNITE ALL KAZAKH PEOPLE
Kunaev Dinmukhamed Akhmedovich
People who eat horses will kill you
Kazakhstan's participation in the Winter Olympics has a long history
Rebooting a field of science and education
Recorded history of Kazakhstan. Part 1
Historical Dates on the Bosphorus
Recorded history of Kazakhstan. Part 2
Materials on theme
Collectivization in Kazakhstan
Charles Baypakov: It is necessary to connect by a cultural thread the Korkyt-ata complex and Baikonur Cosmodrome
Starvation of the beginning of the 30th of 20th century in Kazakhstan: Crime and Punishment
“West Siberian Regional Committee of the All-Union Communist Party of Bolsheviks asks to take urgent measures of prevention further migration of Kazakhs”