Industrial development of Kazakhstan in 1921-1940. 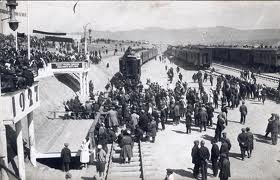 Restoration of the industry and transport of Kazakhstan came to the end in the conditions of country transition to socialist industrialization.

Industry and transport restoration. A backward colonial economy of Kazakhstan , who has survived the ruinous consequences of World War I and the Civil War , was an even more difficult position than the industrialized regions of the country. The industry and transport especially suffered from military operations. Gross production of large-scale industry in 1920 compared to 1913 decreased by half, and the production of the means of production - by 4.5 , oil - 4 times, stopped production of copper and polymetallic ores , copper smelting , many mines and coal mines were flooded or inactive due to the destruction of power plants , waste equipment , etc. In the disastrous state of the transport, in particular rail : more than half of the locomotives and about 90 % of cars required major repairs, destroyed hundreds of bridges , the most affected track facilities , not lack of rails and sleepers for replacement of worn-out , etc.

Recovery work in the industry and on transport of Kazakhstan, the countries which have begun in the conditions of transition to the New Economic Policy, strongly was at a loss not only consequences of economic ruin as a whole, but also jute of 1920 — 1921 when a lot of cattle, and also the crop failure of 1921 which has led to hunger in the republic was lost.

B1920 — 1921only separate enterprises were restored , and as a whole this process was successfully developed only in the second half of 1922. In restoration of a national economy of the republic 1923 became critical. First of all the enterprises for processing of agricultural raw materials that was promoted by a quite good crop of 1922 were restored. Earned large mills in the Kustanay, Ural and Semipalatinsk provinces, Pavlodar etc. that led to fast restoration of the flour-grinding industry. In Northern Kazakhstan oil-producing plants were restored, 20 creameries were again constructed. Certain successes was available and in work of other branches of the food industry, so, for example, in August, 1923 the Iletsky and Korya-kovsky salt-mines which weren't demanding heavy capital investments are restored.

It was adjusted, though slowly work of cottob-cleaning plants in the south of the republic, tanning and other enterprises of light industry. The restored sheepskin, tanning and iron plants in Petropavlovsk in 1923 were connected in the uniform enterprise — a group of industrial enterprises. Skinneries in Alma-Ata, Shymkent and Talgar started working again.

Some steps were taken in restoration of the enterprises of the heavy industry. More quickly the oil industry revived: crafts of Emba and Dossor in 1925 exceeded level of 1913. Successfully there was a technical reconstruction of production, deep pumps were applied to production, developed electrification of crafts, the equipment was updated, geophysical methods of investigation were applied. Successfully the printing industry worked also, quickly reaching pre-war level thanks to what the edition of newspapers in the Kazakh and Russian languages sharply extended.

Ridder's workers persistently fought for restoration of mines, concentrating factory, power plant, the railroad and other objects, but because of insufficiency of the equipment and money these enterprises were transferred to the provision of technical protection and only in 1925 works on restoration of the enterprises of Ridder were resumed. Stayed idle Karaganda and Ekibastuz save, Spass plant, Uspens mine and other mining enterprises.  Only at the end of 1925 works on restoration of Karsakpay melt-copper plant and its narrow-gage railroad Baikonur — Karsakpay — Dzhezkazgan began.

The special attention was paid to transport, without adjustment of which successful work was impossible to carry out the main task of the New Economic Policy — restoration of economic relations between the city and the village, between the industrial enterprises and agriculture.

The main railway artery of the republic — the Orenburg-Tashkent highway the considerable number of engines and cars, fuel, various materials on NKPS development was allocated, highly skilled railway commanders of transport economy etc. went. "grain lines", as continuation of a construction Semirechensk were under construction also new, especially. to the Art. Meadow and further to the Art. Pishpek, the road Petropavlovsk — Kokchetav, and also the Slavgorod line — Kulunda — Pavlodar the Southern Siberian highway etc. The first two lines served for bread export from Semirechye and Northern Kazakhstan to starving regions of the country, and the last — for salt export from Koryakov crafts.

But in Kazakhstan because of its economic backwardness inherited from the colonial period, shortage of the equipment, money and qualified personnel, and also other local difficulties, restoration of the industry and transport happened lower rates, than as a whole about the country and proceeded up to 1927 inclusive. In nonferrous metallurgy more than 60% of all its enterprises worked.

Thus, restoration of the industry and transport of Kazakhstan came to the end in the conditions of country transition to socialist industrialization. By this time considerably I got stronger and the socialist sector started developing in the industries and on the transport, arisen after October, 1917 on the basis of the nationalized private enterprises, its specific weight in all industry of Kazakhstan reached 64, and in the large — 97,2%. To Weah railway lines, and also waterways with their rolling stock, piers etc. also were in state ownership. In the conditions of the New Economic Policy allowing private sector development and a freedom of trade, in Kazakhstan other economic ways have no special development.

In the conditions of the New Economic Policy management of the industry was improved, republican  VSNH was transformed to republic TsSNH, and the enterprises for subordination are divided into allied, Russian, mixed-federal, republican and provincial (local). On the basis of the largest enterprises associations generally on the basis of the self-financing, receiving the name of the Soviet trusts were created. The Uralo-Embinsk oil trust, Altaypolimetall trust, Atbasars trust of non-ferrous metals, Zoloto-ruda trust (group of the gold mines of the Kustanay area) became the enterprises of allied and Russian value. The enterprises of Ekibastuz and Ridder TsSNH of Kazakhstan on the basis of VSNH RSFSR mandate operated. In direct management of TsSNH of the republic were: Ilesoltrest, Pavlodarsoltrsst, Southern Uralzoloto trusts, "Akzhalzoloto", Orenburg and Petropavlovsk skinwooltrest, Kazrybtrest. Every year management of the center of more or less large enterprises of Kazakhstan, in particular extracting industries (oil, nonferrous metallurgy, etc.) which production was taken out to industrially developed regions of USSR amplified. The raw orientation of economy of Kazakhstan was more and more distinctly shown.

Implementation of socialist industrialization of the country, course on which it (would) be planned at the XIV congress of VKP in December, 1925, encountered in Kazakhstan a number of serious difficulties. From them social and economic backwardness of the republic in the conditions of which it was necessary to the Kazakh people, on plans of Communist party and the Soviet government was main, to make prompt transition from feudalism to a socialism, passing a capitalist stage of development. Restoration of a national economy, in particular the industries, was tightened. By the beginning of 1926 the industry of the republic reached only 61, and agriculture — 82,9% of level of 1913.

By the industrialization beginning rich coalfields, oil, non-ferrous metals and other minerals in the republic only started being studied therefore new industrial and railway construction was carried out in many cases without due preparation. So, the legendary Turksib was under construction on pre-revolutionary researches and already in the course of construction works dispute between supporters of Kurday and Chokpar options on the southern part of the highway, and on northern part — Balkhash and Lepsinsk inflamed. On a choice of optimum option in each of these cases a lot of time and means left. On places of new buildings there was no qualified labor, construction materials, equipment and mechanisms, and also money, etc.

These difficulties, and also difficult political situation in Kazakhstan caused in 20 — the beginning of the 30th hard-fought ideological battle round questions of the republic future, in particular, ways of its industrialization, creation of national shots of workers. The main fight inflamed between two points of view. It agrees the first F.I.Goloschyokin was which chief conductor, the part of a source of raw materials of advanced industrial regions of a country was assigned to Kazakhstan.

It was opposed by large politician S. Sadvakasov who supported idea of industrialization with the maximum benefit for the republic and taking into account its economic opportunities, natural and human resources. He noted that a policy of the party and its heads on suburbs a little than differ from former policy which saw in suburbs, mainly, a source of raw materials for the central industry. He supported the forced industrialization of suburbs, complex development of those industries for which in the republic there are conditions: raw materials and labor in the person of million Kazakh poor people. Sadvakasov was against mass resettlement to the republic of "free" working hands from other areas of a country

Use of materials for publication, commercial use, or distribution requires written or oral permission from the Board of Editors or the author. Hyperlink to Qazaqstan tarihy portal is necessary. All rights reserved by the Law RK “On author’s rights and related rights”. To request authorization email to mail@e-history.kz or call to 8 (7172) 57 60 13 (in - 1163)
Қазақша Русский English
MOST READ
Month Year
Heroic mothers of the great steppe
How had the World War II been started?
Philosophy of the Emblem
14 monuments at Tekturmas
The rural akims: the country's hope is in the elections
Kazakh historical drama Tomiris premiered in Istanbul
Stolypin about the worries and hopes of immigrants to the Kazakh steppes
ALASH IDEA IS THE PROTECTION OF KAZAKH STATEHOOD
A tireless explorer of the Kazakh land
SWITCHING TO THE LATIN ALPHABET – UNITE ALL KAZAKH PEOPLE
Kunaev Dinmukhamed Akhmedovich
People who eat horses will kill you
Materials on theme
Genocide subject in the years of great famine in Kazakhstan in western researchers academic discourse
From the history of collectivization of agriculture in Kazakhstan
“West Siberian Regional Committee of the All-Union Communist Party of Bolsheviks asks to take urgent measures of prevention further migration of Kazakhs”
Kostanay convent: the tragedy of 1937