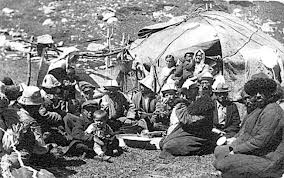 The catastrophic consequences of superforced collectivization repeatedly aggravated by administrative arbitrariness in the so-called planned settling of nomadic and semi-nomadic households.

“The 1930-33 famine in Kazakhstan claimed the lives of 1.5 million people, approximately 1.3 million of whom were ethnic Kazakhs, yet the causes of this disaster remain largely unexamined,” said Sarah Cameron, Title VIII-Supported Research Scholar, Kennan Institute at a 26 March 2012 lecture. Over a quarter of the population vanished, altering the territory, demographics, and identity of Kazakhstan. Cameron stated that the Kazakh famine was brought on by “the brutal collectivization campaign, compounded on the ground by local cadres, and magnified by longer term changes that made Kazakhs far more dependent on grain and vulnerable to hunger.” The Soviet regime’s broader goal was to radically transform the way of life in Kazakhstan with little regard for the loss of life.

Kazakhs are a Muslim, Turkic-speaking group whose ethnic origins are debated. They comprised roughly 60 percent of the total pre-famine population, with the remaining 40 percent consisting of Russians and Ukrainians. Prior to the famine, many Kazakhs were pastoral nomads whose way of life was central to the identity of the population and the region. Stalin’s collectivization policies not only forced Kazakhs to settle in towns or collective farms and abandon their historical traditions, but were also a principal cause of the 1930-33 famine in the republic. The famine drove hundreds of thousands Kazakhs to flee to the neighboring republics of Uzbekistan, Kyrgyzstan, and Russia, as well as to neighboring China, according to Cameron. The famine rendered Kazakhs a minority within Kazakhstan, and only after the republic gained independence in 1991 did Kazakhs recover a slim demographic majority within their own country.

Stalin’s first Five-Year Plan, launched in 1929, was intended to transform the Soviet Union; indeed, its mission was to “overtake the capitalist West and industrialize rapidly.” The collectivization of agriculture was a central aspect of the plan, and authorities “violently shunted peasants into collective farms, where communities were obliged to deliver regular procurements of meat and grain to the state,” explained Cameron. Stalin’s regime faced certain ideological challenges with the collectivization of Kazakhstan. While Karl Marx theorized about worker rebellions and Lenin applied Marx’s theories to peasants, neither contemplated modernizing Kazakhstan’s pastoral nomads, the speaker noted. Given the lack of a “blueprint” in Marxist-Leninist doctrine on how to modernize nomads, according to Cameron, the question became “could Kazakh nomads speed through history and become transformed into successful factory workers?”

In the first collectivization drive, Moscow declared a program of sedentarization on the basis of full collectivization. “Nomads were to be permanently settled and thrust into the collective farms,” said Cameron. The immediate result of collectivization in Kazakhstan included precipitous declines of livestock populations, as Kazakhs slaughtered their animals either for food or to sell them in order to fulfill grain quotas. The societal fabric unraveled with escalating violence, panic in railway stations, disease outbreaks, and even cannibalism. Entire villages were destroyed; indeed, all that remained in some regions were “abandoned huts, rows of corpses, and disease,” according to Cameron. Party officials refused to go into certain areas because they were fearful for their lives.

The Soviet party system in Kazakhstan had difficulty projecting power over the immense distances of the sparsely populated Kazakh republic. The upper ranks of the republic’s bureaucracy were mostly ethnic Russians or Ukrainians, while lower levels were almost exclusively Kazakh. Recruitment of Kazakh cadres into the party apparatus was an important element of the Soviet regime’s nationality policy, which intended “to promote non-Russian groups, rectify the wrongs of imperial Russian rule, and help non-Russians to speed through the Marxist-Leninist timeline of history,” stated Cameron.

Under Soviet rule, many newly recruited local leaders were quickly appointed as chairmen of collective farms and experts on agricultural commissions. The order to collectivize agriculture was accompanied by heightened efforts to purge “class enemies,” for which there were no concrete criteria. Many newly-recruited Kazakh bureaucrats actively conducted grain confiscations against other Kazakhs, using the campaign as a tool for “settling old scores or gaining personal advantage,” Cameron explained.

History textbooks in Kazakhstan today apportion the blame for the 1930-33 famine to Filipp Isaevich Goloshchekin, who was the republic’s party secretary during the heart of the famine, to Stalin, and to the Soviet system. There is also an anti-Semitic strain that makes repeated reference to Goloshchekin’s Jewishness as a method of explaining the disaster. What is less examined in these textbooks and other historiography, according to Cameron, is the crucial role of local-level violence and the Kazakh cadres who were empowered and entrusted by the regime to carry out acts of violence against other Kazakhs. Their actions made the Soviet regime’s policies worse and helped shape the character and nature of the destruction that the famine wrought.

While there is quite a lot of research in Kazakhstan on the famine, since the mid-1990s discussion of the topic has declined. Cameron examined several possible reasons for this shift, including Kazakhstan’s close relationship with Russia. She noted that Kazakhstan’s leaders may fear further exploration of the history of the famine, as it could possibly exacerbate diplomatic tensions with Russia, or even spark anger from or towards Kazakhstan’s large ethnic Russian population.

Use of materials for publication, commercial use, or distribution requires written or oral permission from the Board of Editors or the author. Hyperlink to Qazaqstan tarihy portal is necessary. All rights reserved by the Law RK “On author’s rights and related rights”. To request authorization email to mail@e-history.kz or call to 8 (7172) 57 60 13 (in - 1163)
Қазақша Русский English
MOST READ
Month Year
A role of Buddhism in formation of Central Asian mythologies
From the story of a blood feud
Kazakh historical drama Tomiris premiered in Istanbul
ALASH IDEA IS THE PROTECTION OF KAZAKH STATEHOOD
Stolypin about the worries and hopes of immigrants to the Kazakh steppes
A tireless explorer of the Kazakh land
SWITCHING TO THE LATIN ALPHABET – UNITE ALL KAZAKH PEOPLE
Kunaev Dinmukhamed Akhmedovich
People who eat horses will kill you
Kazakhstan's participation in the Winter Olympics has a long history
Rebooting a field of science and education
Recorded history of Kazakhstan. Part 1
Historical Dates on the Bosphorus
Recorded history of Kazakhstan. Part 2
Materials on theme
Charles Baypakov: It is necessary to connect by a cultural thread the Korkyt-ata complex and Baikonur Cosmodrome
From the history of collectivization of agriculture in Kazakhstan
On the question of new concept of history of the peasant rebellion in Western Siberia and Northern Kazakhstan at the beginning of the 1920s.
Dynamic of social-democratic changes of population’s structure during the modernization