Auls and rural areas in Kazakhstan during the New Economic Policy 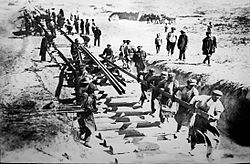 Key measures developed and promptly carried out within the framework of the New Economic Policy very soon and effectively influenced the agriculture.

After the Civil War military and communist measures conflicted with new social, economic and political realities. Further passion for revolutionary romanticism with believes in possibility of direct transition to the communist production and distribution turned into growth in destructive tendencies. Agriculture of a whole country, including the economy of Kazakhstan, experienced their failed character.

The most crisis dynamics was observed in agriculture of the republic. Thus, sown areas decreased from 3,6 million desyatina (archaic land measurement used in tsarist Russia, equal to 10,925 square metres) in 1914 to 1,6 in 1922. Crop production declined from 38,7 poods (unit of mass equal to 40 funt) in 1914 to 18,7 in 1921. Over that period the gross output of grains became more than three times lower.

The cattle-breeding was in the most complicated situation. From 1914 to 1922 the amount of cattle declined by 2,1 million, while horses — by 2 million, small cattle (sheep and goats) — almost by 6,5 milion, camels — 0,3 million heads. In total, over this period the number of heads of all kinds of cattle decreased by more than 10,8 million.

Famine and related diseases mortality rate as well as mass migration from the regions faced disaster resulted in sharp population decrease. In 1914 the population of the region was 4 811 662 people and in 1922 — 3 795 963.

Coercive state policy caused the rising number of discontented dwellers of auls and villages. In some cases the reaction of rejection of administrative terror organized by the government resulted in the acts of open sabotage and armed resistance of peasants. In 1920 a riot supports by the significant number of those dissatisfied by food dictatorship of middle class and affluent segments of society occurred in the Semipalatinsk region. The same year disorders embraced Western Kazakhstan where wide-ranging peasant movement under the leadership of the former Division Commander of the Red Army A. Sapozhkov deployed. In February — March 1921 the flash points appeared in the Akmolinsk, Petropavlovsk, Kokchetav and other districts of the region.

The situation in Kazakhstan confirmed the common scene of economic and political crisis which embraced the country. There, like it was everywhere, everything was the evidence of need to transit to new principle of economic policy the main basis of which would become the idea of the denial of utopia of the country without goods and returning to usual economic, i. e. market commodity-money relations.

Decisive step towards the creation of efficient system was made by the 10th congress of the Russian Communist Party (Bolsheviks) (March 1921).

In addition to the deeply meaningful changes in tax policy made the strongest impetus to economic activity, effective actions in the finance, loans, money economy, rentals, labor law, land regulation and a number of other spheres of socio-economic relations were taken.
Key measures developed and promptly carried out within the framework of the New Economic Policy very soon and effectively influenced the agriculture.

In 1925 cultivation area expanded to 3 million hectares. In several traditionally grain regions of the Ural, Akmolinsk and Semipalatinsk regions the level of the 1913 was reached. In 1925 peasants gathered 92 million poods of grains, slightly fewer than it was in 1914. Cattle-breeding also emerged from the crisis. Compared with 1922, in 1925 the number of livestock doubled.

The trade gained a wider scope. In 1926 128 trade fairs operated on the territory of Kazakhstan. The total turnover of the fair trade exceeded 20 million rubles. The most famous fairs were Uil, Kuandy, Karkarinsk, Temir, Kokchetav, and Atbasar fairs.

The state regulatory actions in the end of the 1920s had unreal goals and devastating nature.

Thus, as a result of redistribution of grassland and arable land it was planned to liquidate domination of bays (rich landowners) in aul and to limit the possibility of increase in the number and growth of bay’s farms.

However, initially, this reform had some weaknesses.

Repartition of lands was followed by ignorance of the fact that under the circumstances of really existed economic structure of aul the simple land redistribution, in itself, didn’t correct the major imbalances; gaining the land without an opportunity to use it had poor result and couldn’t soften the processes of stratification and stimulate the formation of the middle class. To provide such opportunity the economy should have secondary productive resources (working cattle, agricultural instruments, seed, and so on). Meanwhile, the poorest, small and some middle farms (i. e. the main recipients of redistributed lands) faced, in this regard, the sharpest deficit. In this situation many poor and small farms, which obtained an access to lands, had to refuse to use it in favour of the former owners, rich bays.

Therefore, with regard to economic advantages, the reform not always and everywhere couldn’t compete with traditional form of social organization.

Confiscation of productive assets (mainly, cattle) belonging to prosperous bays, "semi-feudals" as well as their removal from the area of living had much more radical goals.

According to a resolution, it was panned to confiscate 700 farms which had more than 400 livestock in nomadic areas, more than 300 — in semi-nomadic and more than 150 — in settled. The campaign was planned to be finished by 1 November 1928 (later it was extended for 10 days).

According to the documents on the results of campaign, in fact 696 farms were confiscated, 619 families were taken out beyond the borders of their place of residence. Around 145 thousand cattle were expropriated; the most part of it was given to poor farms.

Meantime, the analysis of published statistical materials demonstrates that the significant part of farms didn’t get an appropriate for the further development number of cattle. Having only several livestock units these farms couldn’t be incorporated into the community and had more or less equal rights and therefore, abandoned hope to strengthen the social status (very soon obtained cattle was sold or slaughtered).

Thus, the New Economic Policy in Kazakhstan had very controversial nature and was completed not with the "great turning point" (as it is often thought) but approximately by the end of the second half of the 1920s. That was the period when many fundamental ideas of the New Economic Policy were blockaded and the actions which gave rise to the background of the coming tragedy — unprecedented ethnic and ecological crisis, were conducted.

Use of materials for publication, commercial use, or distribution requires written or oral permission from the Board of Editors or the author. Hyperlink to Qazaqstan tarihy portal is necessary. All rights reserved by the Law RK “On author’s rights and related rights”. To request authorization email to mail@e-history.kz or call to 8 (7172) 57 60 13 (in - 1163)
Қазақша Русский English
MOST READ
Month Year
The referendum on the Constitution is a significant stage of democratization
Philosophy of the Emblem
The rural akims: the country's hope is in the elections
Kazakh historical drama Tomiris premiered in Istanbul
Stolypin about the worries and hopes of immigrants to the Kazakh steppes
ALASH IDEA IS THE PROTECTION OF KAZAKH STATEHOOD
A tireless explorer of the Kazakh land
SWITCHING TO THE LATIN ALPHABET – UNITE ALL KAZAKH PEOPLE
Kunaev Dinmukhamed Akhmedovich
People who eat horses will kill you
Kazakhstan's participation in the Winter Olympics has a long history
Rebooting a field of science and education
Recorded history of Kazakhstan. Part 1
Materials on theme
Collectivization in Kazakhstan
History of Akmolinsk-Kartaly Railway construction (1939-1945)
Mass migration of the population as a consequence of collectivization and famine in Kazakhstan
“West Siberian Regional Committee of the All-Union Communist Party of Bolsheviks asks to take urgent measures of prevention further migration of Kazakhs”