Basmachi movement in the south of Kazakhstan and Central Asia 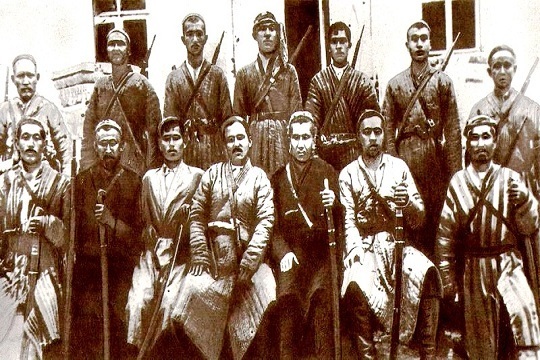 The establishment of Soviet power in Central Asia, in the first years after the October Revolution,  was illustrated in a positive way by Soviet historians.The basic idea was that the Soviet liberated the numerous people of feudal oppression and gave them the right to political self-determination.

According to this view, Basmachism seen as a reactionary movement, which was headed by Bays (noblemen) and Muslim clergy, and labor dekhans unconditional allegiance to the new government. However, some data indicate the colossal confrontation between the Soviet government and the wider local community. The scale of war crimes throughout the Central Asian region in the 20s of 20 century makes to re-evaluate Basmach movement and activities of the Soviets themselves.

At the end of November 1917, the 4th regional congress of Muslims announced the creation of the Kokand autonomy, the territorial association free from the power of the Bolsheviks. Madamin-bekh and Mustafa Chokayev became the managers of autonomy.

Punitive expedition under the leadership of the CPC chairman of Turkestan Republic F.I.Kolesov was sent to Kokand autonomy, since the new Kokand authority refused to allow representatives of the Bolshevik party to governthe autonomy. In the report from July 31, 1921, the member of the RMC Berezin described the actions of Kolesov: "Kokand events were actually to slaughter unarmed Muslim masses of the city (the proletarian and petty-bourgeois).

Impression of this massacre had to poison with national enmity working Muslims make hundreds, even thousands of them to run away, to retreat with gangs of Irgash  into the inland of the country, inaccessible to Russian authorities areas. Here's the moment of that Basmach waves on the crest of which appeared  national heroes like Irgash, Madamin-bekh, Tuychi and  so on". Here Berezin continues: "Red Guard detachments, whose task to combat with gangs of Irgash and others, formed mainly of certain criminal elements. Every trip was nothing but solid as robbery, rape, murder of civilians, hiking did not differentiated from the death squads of the royal government. The way of these groups had always been littered with piles of corpses". Next Berezin compares the loss of Basmachi and their real quantity:"Reports convey that for three years of fighting with Basmachis 300 thousands of them were destroyed (majority of them in the early years). At the same time Basmach gang never exceeded 15 thousand. Thus, we have the systematic destruction of the labor dekhans instead Basmachis liquidation".

Institute of hostage-taking became an important component of the policy of Red Terror in Central Asia. Basmachis often moved away from open conflict, adhering to guerrilla tactics. Hostage-taking, were so widespread, allowing Soviet authorities cause Basmachi to open battle or Basmachis catapulted themselves, to save the lives.

One of the decree which prescribed taking and execution of hostages, looked like this: "If leaders within 15 days will obey, lay down their arms, they would be granted clemency, if not then in 15 days their properties will be confiscated. If they will actively continue their actions then they would be shot". Apparently, some of the regional commanders of headquarters personally participated in the executions of civilians, relatives of  Basmachi, including women and children. Thus, the commander of the Samarkand region Snitko wrote in September 1922 in Tashkent, if  Basmaches Bahram, Ochil, Hamarkul, Ziatdinov and Shahryar  would not lay down their arms soon, he declares war on the entire population of the Samarkand district. Also five relatives of Basmach will be personally shot by him.

Bascmach units originally were formed from the local population, which was extremely dissatisfied by the aggressive policy of the Soviets in the region". In the depleted troops of Basmachis usually recruited          war-affected population from the villages and we ourselves are the providers of Basmachis"- said Tyurakulov, the member of the Central Asian RCP (b) in a report on the issue of Fergana.

In addition, the Soviet authorities did not take into account ethno-religious specificity of region. Closing of mosques and madrassas, abolition of the Muslim courts applied a huge insult to religious feelings and caused not just a resentment among the local residents, but hatred and intransigence towards the Soviet regime. The calls for "Jihad" (war) against "Russian invaders who came to destroy Islam", spread throughout the Central Asia. The fall of Kokand autonomy in February 1918 and taking of Bukhara and Khwarezm in 1920, only escalated the conflict of the local population with the Soviet authorities.

Many high-ranking military from the local population, who entered to serve to the Soviet government, also showed their dissatisfaction about current situation. Achilbek Ghazi, the head of Muslim troops in Samarkand region, speaking on the side of the Soviets, turned to Samarkand revolutionary committee condemning the policy of terror. He wrote: "You went against our principles and trampled freedom. You, on behalf Bolshevists government, never cease to haunt us and never cease to haunt the people. You purposely declare Russian and Jews that Basmaches harmful element and should be destroyed at the root, otherwise they will cut off your head. Food and stuff we take from population by force of arms, there is no other way to us. You know very well that people give nothing to us voluntarily. Nevertheless, you still oppress people because they help Basmachis. Population fulfills all your taxes".

It is still remains arguable question about the role of the GPU in punitive operations in Central Asia. In the historical literature of the Soviet period, the activities of the GPU in Central Asia was estimated as the fight against counter-revolutionary elements and personalities of GPU employees themselves had always presented as the true heroes. In contrast to this position in the modern post-Soviet historiography had repeatedly put forward the thesis, where the GPU was the main instrument of terror policy in Central Asia. The representatives of the GPU were  attributed to the most serious crimes in the region. It should be noted, that neither one nor the other point of view does not correspond to reality. Certainly, it is undeniable the participation of the GPU in repression in Central Asia, but exactly the staff of the GPU in their reports to Moscow and Tashkent in the early 20s. reported unreasonably terror against the local population, offering severely punish as the Red Army commanders and enlisted personnel for self-authorized executions of civilians. Occurrence of Basmach movement in Central Asia after the October Revolution was an acute reaction of the local population to the Soviet authorities on their large-scale terror policy. Broad sections of the local population unwilling to change a centuries-old way of life and  abandon the usual religious values, were quite impervious to the ideas of socialist construction. With all the strengths they resisted to the aggressive and rampant Russian expansion in the Central Asian.

Materials on theme
Kazakhstan during the civil war
Kazakhstan after falling of imperial autocracy.
To the question of study of Petropavlovsk-Ishim rebellion in years of civil strife
Establishment of Soviet power and its first steps in economic and cultural development.