Ethnic processes on the territory of Kazakhstan 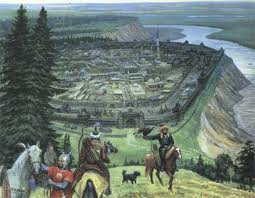 Ethnic history of Kazakhstan, as well as the entire region of Central Asia is extremely complicated.

Ethnic processes on the territory of Kazakhstan

Ethnic history of Kazakhstan, as well as the entire region of Central Asia is extremely complicated. Over the centuries here crossed destinies of many tribes and nations. Information about them is scattered in a large number of sources in many languages, Oriental and European. The several generations of Orientalists researchers carried out great work on their study.

In the scientific literature to the understanding of the ethnic group (the people - the tribe, people, nation) as a historically established, stable combination of people, which has not only a common external physical characteristics , but also the relatively stable characteristics of culture (including language), and mental and also conscious of its unity and separation from other ethnic groups (self-consciousness) established by the self-name (ethnonym) . To form a nation and further the preservation of its integrity is essential unity of the territory of its settlement. So that people have common traits that distinguish them from the other ethnic groups , they have continuously for a long time to communicate with each other, and this is possible only under the condition of their settlement , at least during the formation and consolidation of ethnic groups within a single, permanent site.

In XV-XVI centuries largely completed the process of formation of the Kazakh nation and its ethnic territory, actually in the same range, which housed the Kazakhs in the following centuries.

Ethnic basis of the Kazakh nation, as well as a number of other Turkic peoples of Central Asia have also established to XV-XVI centuries were numerous Multilanguage last tribes and nations from Saks, Usuns, Kangüy, Huns, Turks, Turgot - necks, Karluk, Oguz, Kimaks, Kipchak to Naiman, Argyns, Kireev, Kongrats, Dzhalai, Dulats and many others who lived at different times in the territory of Kazakhstan. Some of them are in different eras had their state. Many of the ancient Turkic tribal and tribal names are stored in Kazakhs and at a later time.

The origins of ethno-genetic processes that caused the formation of the Kazakh nationality date back to ancient times - the era of the expansion of primitive society. In the initial stages of these processes have been linked to the indigenous population. But in the subsequent development are increasingly dependent on ethnic processes over large areas of Central Asia. Movement of the ethnic history of the territory of Kazakhstan , the addition in the different periods of the major ethnic and ethno-political communities , and ultimately - the Kazakh nation organically due to the evolution of the relationship and economic forms of nomadic pastoralism and settled agriculture , and urban culture, progressive changes in social relations. In many ways, the ethnic processes determined the most important political events of antiquity and the Middle Ages that took place in the whole of the Kazakhstan – Central Asian region and beyond.

In the development of ethno-genetic processes on the territory of Kazakhstan are several stages. According to anthropological data , in the process of ethnic development remained stable for a long time Caucasoid population has undergone over time, more or less strong (in different areas ) changes in the direction of Mongoloid . Not remain the same and the language situation, the Iranian language ancient tribes gradually gave way to the later Turk-speaking inhabitants of the area. Andronovsk tribes of Indo-Iranians, Caucasoid appearance, in charge of cattle breeding and agriculture in the Bronze Age, inherited in the early Iron Age related nomadic Scythians pastoral tribes of Saks in the southern and eastern areas Savramats - in the north and west.

A decisive step in the ethnic processes in Kazakhstan and in the whole region steppe of Eurasia associated with the mass resettlement of Turks in a westerly direction from the middle of I millennium AD. All the more specific, mono-ethnic - namely, Turkic, became ethno-demographic situation in the steppes of Kazakhstan and neighboring countries. On the vast territory in the south, south- west, from northern Mongolia to the Amu Darya, including the Seven Rivers , and gradually settled Turkic tribes . On the lands of Kazakhstan Turks, among whom sources describe tribes Butu, Bairku , Beckley , kybyr , Turgish , Bulak , Karluk , etc. , mixed with the descendants of the ancient inhabitants of Saks, Sarmatians, Usuns, Kangüy.

The formation of new social (feudal) relations and the formation of the Ancient statehood in the VI - Turkic khanate , then the Western Turkic Khanate - contributed to the intense influx of Turkic-speaking tribes in the western lands , Turkization of local population of Kazakhstan, the progressive Mongolization of the anthropological type of consolidation of the Turkic tribes certain areas .

In the age of occurrence of a number of the Turkic states of integration trends in ethnic processes in Kazakhstan increased. These states have made ​​it possible political consolidation of local and migrant population its ethnic and cultural segregation in some regions, and the stabilization of the conditions for the economic development of the territories.

In the south-east of Kazakhstan Turgesh Khanate (VII-VIII) united the tribes on a large area of Chu- Ili watershed, centered on the Talas and Suyabe. The Turks are attached to settled agricultural and urban life (before the bearers of this culture were mostly Sughdians).

In the Karluk tribal federation (VIII-X centuries) which moved into the territory of the Seven Rivers from area between West Altai and Tarbagatay, apart from Karluk, were included nomadic and semi-nomadic Turkic tribes, united by a common term " Karluk ": Tuhsi , Chigils , azkishi , muzzle , Khaladji Charuk , arguments , Barskhany and others (some of them were part of the Turgesh tribal alliance) . It also includes the Oguz group, the Uighurs, Semirechensk Sogdians. The main part of the Oguz went to Aral. In the Karluk ethno-political community dominated Caucasoid racial type with a small admixture of Mongoloid. A large mass of Karluk migrated to Transoxiana, amounting to form a substantial part of the Uzbek nation.

On the territory of South Kazakhstan State Oguz (IX-XI cc) joined Kangui ( Kangly) and Kangaroo Pecheneg tribes and ethnic groups of the Syr Darya valley , aces and Alans of the Aral- Caspian -cal regions, and the Turkic nomadic tribes -advanced to the west of the Seven Rivers , among them - the ethnic group of the Karluk , Khaladji Chagrov, Charuk . In the guise of anthropological Oguz dominated Mongoloid features. Subsequently, most of the Oguz moved to Central Asia, and the other was a part of a new ethno -political association on the territory of Kazakhstan to the State of Kipchak.

In the northern, eastern and central regions of Kazakhstan in VIII-XI centuries . lived kimak Kipchak tribes have also established their early feudal state system . The structure kimak political union were nomadic and semi-nomadic Turkic tribes Kipchak , eymur , Imac , Tatars, Bayandur and the other successors of kimaks statehood was the kypchaks became one of the largest tribes kimak association.

Use of materials for publication, commercial use, or distribution requires written or oral permission from the Board of Editors or the author. Hyperlink to Qazaqstan tarihy portal is necessary. All rights reserved by the Law RK “On author’s rights and related rights”. To request authorization email to mail@e-history.kz or call to 8 (7172) 57 60 13 (in - 1163)
Қазақша Русский English
MOST READ
Month Year
Kazakh historical drama Tomiris premiered in Istanbul
ALASH IDEA IS THE PROTECTION OF KAZAKH STATEHOOD
Stolypin about the worries and hopes of immigrants to the Kazakh steppes
A tireless explorer of the Kazakh land
SWITCHING TO THE LATIN ALPHABET – UNITE ALL KAZAKH PEOPLE
Kunaev Dinmukhamed Akhmedovich
People who eat horses will kill you
Kazakhstan's participation in the Winter Olympics has a long history
Rebooting a field of science and education
Recorded history of Kazakhstan. Part 1
Historical Dates on the Bosphorus
Recorded history of Kazakhstan. Part 2
Materials on theme
Anthropological aspects of the origin of the Kazakh people
Conditional share Mongoloid elements in the population of Kazakhstan in various cultural and historical periods according craniology.
Completion of the formation of the Kazakh nation