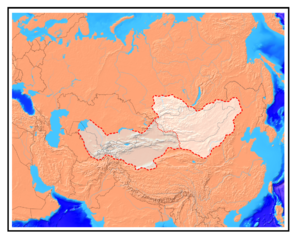 The migration period (2-5th centuries) significantly changed the ethnic and political map of Kazakhstan, Central Asia and Eastern Europe. In the 5th century multiple groups of Turkic-speaking tribes, the Teles (Tireks), settled in the steppe zone extending from the northern Mongolia to Eastern Europe. In the south their encampments reached the headwaters of the Amu Darya.

In the 6th century the lands of Kazakhstan were possessed by the mighty Empire – the Turkic Khaganate, whose rulers came out of the dynastic Ashina clan. Formation of the Turkic ethnic group lasted from the 3d till the middle of the 6th centuries in the areas of Gansu, East Turkestan and the Altai.

The first mention of the ethnonym "Turk" was found in the Chinese sources, dating from 542. According to the Chinese sources the Turks descended from the Huns (Xiongnu). In 546 the large crushed troop of the Tele tribe in the amount of 50 thousand tents joined the Turks in Altai. After that the Turkic tribe became much stronger. In the spring of 552, the leader of the Turks Bumin revolted against their overlords, the Rourans (Juan-Juan), and crushed them. On the ruins of the previous state they have established the Turkic Empire. The ruler of this ethno-social confederation was Bumin Khagan (died in 553). During the reign of his son Muqan Khagan (553-572) the Turkic Khaganate reached political supremacy in Central Asia. He conquered the Khitans in Manchuria, the Kyrgyzs on the Yenisei. The northern Chinese state became their tributary.

The Turks moved to Central Asia looking for the reaches of the sedentary tribes. Here they met the Hephthalites, whose possessions stretched from the Caspian Sea to northern India and Eastern Turkestan. In 561-563 the Turks formed an alliance with Iran against the Hephthalites. In 564 the Shah of Iran, Khosrau Anushirwan, (531-579) conquered Tocharistan, which was an important strategic area of the Hephthalites. The main forces of the Hephthalites were defeated by the Turks in 587 near Bukhara. The borderland between Iran and the Western Turkic Khaganate was the Amu Darya River.

After the conquest of Central Asia the Turks took control of the Silk Road leading to the Mediterranean countries.

The Turks and the Sogdians were interested in direct trade relations with Byzantium. Iran was trying to prevent it. In 568 the Sogdian merchant Mannah led the Turkic embassy to Constantinople, where the trade agreement was concluded, and was formed a military alliance against Iran. The Persians were trying to prevent the establishment of the Byzantine Empire and Khaganate union. Iran bound itself to pay tribute to the Turks in the amount of 40 thousand gold every year and not to prevent the trade. The Turkic troops moved behind the Amu Darya. This outcome affected the Byzantine and Turkic alliance. In 571 Istemi conquered the North Caucasus and went to the Bosporus (the Kerch Strait). His son Turksanf captured Kerch and invaded the Crimea (576), but soon left the peninsula. Internal warfare and social conflicts weakened the Khaganate. Iran got stronger and in 588 defeated the Turks in Herat. Byzantium in 590 recaptured the Bosporus.

Period of internecine wars (582-593) in Turkic Khaganate completed in 603with the forming of the Western Turkic Khaganate, located in the territory from the oases of Eastern Turkestan to the Amu Darya, from the Volga region to the North Caucasus steppes.

The ethno-political core of the Khaganate were the "ten tribes" (Onoq Budun), located in ancient Usun land from the Karatau mountains to Dzungaria. To the east of the Chu River settled the five Dulo tribes, and to the west of it – the five Nushibi tribes. The capital was Suyab city (near Tokmak in Kyrgyzstan), and the summer residence was Ming-Bulag (near the city of Turkestan). The Khaganate reached the height of its power under the reign of Jegui Khagan (610-618) and his younger brother, Jhabgu Khagan (618-630). New military campaigns in Afghanistan and Tocharistan extended the boundaries of the state to the north-western India.

There were mostly nomadic and semi-nomadic agricultural activity and sedentary farming in the Khaganate. The city and the steppe were interdependent and complementary parts of the whole socio-political system in the Khaganate. The Turkic and Sogdian people made their living raising a livestock, farming, trading and crafting.

The first person in Khaganate was Khagan - the supreme ruler, military commander, possibly the owner of all the land.

The highest titles in Khaganate were Yabgu, Shad and Elteber. All of them belonged to the Khagan family. The judicial functions were performed by Buyruqs and Tarkhans. The main population of the Khaganate were the free pastoralists (Karabudun). The tribes socially divided into two types: aristocratic and vassal. Subordination always meant the tributary relations establishment. One of the purposes why the Turks raided on neighboring tribes and nations was the capture of slaves.

The Turks usually preserved the social, economic and political system in the conquered lands, but the Khagan governors Tuduns controlled the collection of tribute and sending it to the Khagan residence. In the Western Khaganate class formation and feudal social relations formation were in the process.

Military and political resources of the central government in the Western Turkic Khaganate were insufficient to keep the tribes and nations in obedience. Continuous internecine warfare and frequent change of rulers took place in the Khaganate. Tribal wars and dynastic strife, continuing during sixteen years (640-657), led to the invasion of the Tang Empire in Semirechye. The Tang governors were trying to control the Western Turkic tribes using their henchmen from the Khagan family. But the Turks were continuing to fight against the Tang expansion and their henchmen. This led to the rise to power of the Turgeshes and in 704 to the establishment of their political hegemony in Semirechye.

By the time of the Arab conquest Kazakhstan and much of Central Asia were under the rule of the Western Turkic Khaganate. The main role in the fight against the Arabs played the Turgeshes, who came to power in Zhetysu. The founder of their dynasty was Wushile Khagan (699-706). He drove Borishad out of Zhetysu (Semirechye) and asserted his authority in the lands from Tashkent to Turfan and Beshbalik. The main residence (Great Horde) was in Suyab in the valley of the Chu River. The second one was in Kunhut in the valley of the Ili River. Wushile divided the country into 20 tutuks (appanages) with seven thousand warriors in each.

In 705 the Arabs attacked the areas east of the Amu Darya - Transoxiana. Qutayba ibn Muslim,the governer of Khurasan, after capturing Balkh in 706 marched to Paikend (near Bukhara). The Turgeshes came to aid the Sogdians. The united forces of the Turks and Sogdians inflicted a serious damage upon the Arab armies. However, Qutayba ibn Muslim fraudulently managed to confront allies with each other. In 709 Kutayba marched again to the Transoxiana and reached the region of Bukhara. The Turkic and Sogdian coalition made a strong strike against the Arab army. Again, using the tactic of deception, Kutayba forced the Sogdian king Tarhun to refuse the Turk’s help. As the result the Arab forces conquered Bukhara at last.

In Turgesh Khaganate Wushile’s son Sakal Khagan (706-711) inherited him. Inside the Turgesh state there was no unity. International position of the state was difficult. Together with the Sogdians in the west they waged war with the Arabs, in the south there were more dangerous Tang forces, in the east the Central Asian Turks threatened them. The Eastern Turkic Khagan Kapagan at the battle of Boluchu (in Djungaria) in 711 defeated the Turgeshes. The Eastern Turkic army moving to the west crossed the Syr Darya. At this time, the people of Samarkand and the Central Asian Turkic Khagan revolted against the Arab governor. However, Kutayba came to the rescue and saved the Arab garrison from complete destruction. In the 712-713 the united forces of the Turks, Sogdians and the inhabitants of Shash and Fergana revolted against the Arabs. In response Kutayba gathered a large army and sent it to Ferghana and Shash. Most of the Shash settlements were burned. Realizing that the Turgesh alliance with the Central Asian nations threatened the Arab control of Transoxiana, in 714 he organized a military campaign against Isfijab.

The Turgesh Khaganate for several years was in political instability, but strengthened after the ascension to the throne of Suluk Khagan (715-738). Military and administrative power passed to the Black Turgesh tribes, whose Horde (residence) was moved to Talas (Taraz).

Skillful diplomat and a brilliant military leader Suluk had to fight on two fronts. In the west the Arabs represented a serious threat, and in the east the Tang court supported the members of the Western Turkic Khagan dynasty, settled in East Turkestan. Taking diplomatic (marital relations) and military actions Suluk prevented danger from the east. This allowed the Turgeshes to take active steps in the west direction. In 723 the Turgeshes with the Karluks of Ferghana and the inhabitants of Shash defeated the Arabs. The Turgesh Khagan Suluk acted against the Arabs with courage and determination and was named by Arabs Abu Muzahim. Only at the end of 732 the Arab governor defeated the Turgeshes and entered Bukhara. In 737 Suluk formed a campaign against the Arabs and reached Tokharistan, but was defeated after that. On his return to Suyab he was killed by one of his generals, Baga Tarkhan.

When Suluk was killed the Kara and Sary (Black and Yellow) Turgeshes began a civil war.

In 746, the Karluks moved from Altai and Tarbagatay and settled in the territory of Zhetisu. In the internecine war and in a fierce battle with the Arabs the Turkic Khagans lost their former power and therefore could not resist the Karluks. The Chinese empire took advantage of this situation. In 748 the Chinese governors in Eastern Turkestan led an army to Suyab, seized and destroyed it. The ruler of Shash was executed. His son asked the Arabs for help. In 751 in Atlah city near Taraz there was a tremendous battle between the Abbasid commander Ziyad ibn Salih and the Chinese commander Gao Xianzhi. The battle lasted five days. At the decisive moment the Karluks forces composed two-thirds of the Chinese army revolted and changed to the Arab side. The Chinese army was subjected to a devastating defeat. The battle of Atlah had great historical significance in the lives of people in Zhetisu and Transoxiana. The Tang forces left not only the region of Zhetisu, but also Eastern Turkestan under the pressure of the Uyghurs and Tibetans. The Arabs also could not keep control in the Talas Valley and retreated to Shash. But the civil wars undermined the Turgesh state and it fell in 756 under the pressure of the Turkic Karluk tribes.

Use of materials for publication, commercial use, or distribution requires written or oral permission from the Board of Editors or the author. Hyperlink to Qazaqstan tarihy portal is necessary. All rights reserved by the Law RK “On author’s rights and related rights”. To request authorization email to mail@e-history.kz or call to 8 (7172) 57 60 13 (in - 1163)
Қазақша Русский English
MOST READ
Month Year
Burial mounds of the southwestern part of the Semirechye region
Union of the Archives and Library
The referendum on the Constitution is a significant stage of democratization
Heroic mothers of the great steppe
Philosophy of the Emblem
14 monuments at Tekturmas
The rural akims: the country's hope is in the elections
Kazakh historical drama Tomiris premiered in Istanbul
Stolypin about the worries and hopes of immigrants to the Kazakh steppes
ALASH IDEA IS THE PROTECTION OF KAZAKH STATEHOOD
A tireless explorer of the Kazakh land
SWITCHING TO THE LATIN ALPHABET – UNITE ALL KAZAKH PEOPLE
Kunaev Dinmukhamed Akhmedovich
People who eat horses will kill you
Kazakhstan's participation in the Winter Olympics has a long history
Materials on theme
Karluk Yabgu State (756-940)
Questions of systematization of medieval written sources on the history of Kazakhstan and Central Asia
Kara-Khitan Khanate (1128-1213). Naiman and Khereid uluses
Kazakhstan in the Middle Ages