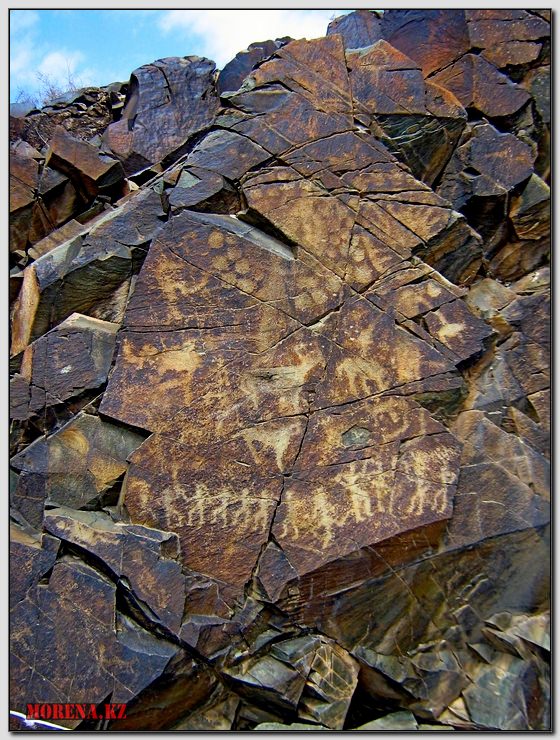 Here the main part is made by petroglyphs of  bronze age. In the same group there are the most informative and interesting drawings connected with the most ancient pagan beliefs and mythological representations of the ancient population of Kazakhstan. Among them are iconic scenes from mummers characters, images of people in the animal (wolf) masked image of primitive dances, sun-characters and chariots. The most striking and valuable drawings for the history are in the gorge Tamgali, in the mountains Kulzhabasy, Eshki-Holmes and Bayanzhurek. The most interesting include drawings of  Tamgali and in the area of Ak-Kynar with figures of extinct wild oxen. Some of them have a size of more than three meters. In the Ak-Kynar the figures of men in wolf masks and images of wolves, standing on its hind legs. It also includes image of a bull with human figures on the horns of the animal in dancing posture.

About one hundred ancient chariots, scenes with sacrifices of animals engraved on the rocks of  Eshki-Holmes mountains. These petroglyphs are engraved in the second millennium B.C. This is evidenced by the archaic chariot, the types of weapons (axes, maces) and the ancient settlement of the Bronze Age who located at the foot of the mountain.

Among the petroglyphs found by archaeologists the earliest is in the mountains Kulzhabas in  240 km. to the west from  Almaty city, the latest in the range of the Bronze Age - figures in the mountains Eshki-Holmes - end of the second millennium BC.

The largest cluster of drawings, usually located  in the places rendered habitable in the ancient time in sanctuaries open-air.

Drawings of this era appeared at the beginning of the first millennium B.C. They are much less than the figures of the Bronze Age, but they differ a great expressiveness.

The drawings executed in "animal" style in the gorge Koytas in a valley of the river Usek are most known among them. Among them there are no more ancient images. These figures include the stylized figures of seven wild boars, knocked on a separate large stone next to a small drawings of  wild rams and goats. Also, on the huge stones from a  height of 2 - 3 meters to 7 - 10 meters, on the ancient moraine boulders, figures of deer, wild rams, goats are carved. Most of them are made in the form of contour. Part of  figures different in characteristic patterns - swirls on hips of deer and goats, with decor in the form of a grid.

Other clusters of Saks figures are located next to the ancient Bronze Age petroglyphs. These petroglyphs are known in the mountains Eshki-Holmes. Sometimes they continue a graphic number of more ancient drawings, but more often placed on free plates.

In Eshki-Olmesa it is drawings of the stylized eagles, deer with the drawn-in feet, torment scenes predators of goats or deer and wild rams.

Expressive scenes with scenes of predation by wolves hoofed animals. Considerable part of pictures on this monument can trace the evolution of art "animal" style.

About emergence and development of "animal" style there are many works of experts, but not resolved the question of the place of occurrence.

As in the petroglyphs rock art  style is expressed adequately, it promotes the study of the history of "animal" style formation.

Mariana A, PhD, Research Center of the Institute of Archaeology. A.H Margulan

Use of materials for publication, commercial use, or distribution requires written or oral permission from the Board of Editors or the author. Hyperlink to Qazaqstan tarihy portal is necessary. All rights reserved by the Law RK “On author’s rights and related rights”. To request authorization email to mail@e-history.kz or call to 8 (7172) 57 60 13 (in - 1163)
Қазақша Русский English
MOST READ
Month Year
The referendum on the Constitution is a significant stage of democratization
Philosophy of the Emblem
The rural akims: the country's hope is in the elections
Kazakh historical drama Tomiris premiered in Istanbul
Stolypin about the worries and hopes of immigrants to the Kazakh steppes
ALASH IDEA IS THE PROTECTION OF KAZAKH STATEHOOD
A tireless explorer of the Kazakh land
SWITCHING TO THE LATIN ALPHABET – UNITE ALL KAZAKH PEOPLE
Kunaev Dinmukhamed Akhmedovich
People who eat horses will kill you
Kazakhstan's participation in the Winter Olympics has a long history
Rebooting a field of science and education
Recorded history of Kazakhstan. Part 1
Materials on theme
Religion and art
Epoch of bronze (XXVI-VIII centuries B.C.)
Bronze age in Kazakhstan
Household, culture, society.