Home History of Kazakhstan The Huns 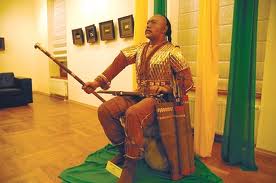 In the history the name of Huns is widely known. The name of the disappeared nation associates with eagerness to fight, cruelty and barbarity.

In the history the name of  Huns is widely known. The name of the disappeared nation  associates with eagerness to fight, cruelty and barbarity. Huns led by Atilla did devastating attacks on the European countries, they began great resettlement of the people. All these are familiar events of the European history.  Asian tribes of the Huns living in Central Asia and in the territory of Kazakhstan in the last centuries BC — the first centuries AD are less known. In the historical literature, they are known as the Xiongnu or the Huns.

The sources tell about the relationship between Hun and Kanguy.

In 55 g there was a division of the powerful Hunn  state into two parts — southern and northern. In northwest Mongolia near the lake Kyrgyz Nur the lord of northern Huns Chzhichzhi founded the residence. From here they made attacks to  the next tribes of  the Usuns. China was in the hostile relations with Chzhichzhi, especially after  Chzhichzhi ‘s order to kill the Chinese official and the ambassador. Sharp rivalry happened between it and head of the southern Huns. In these conditions for Chzhichzhi there was timely a proposal of the possessor of the state Kangyuy which was on coast of Syr-Darya, about the union and joint fight against the state Usun. He invited Chzhichzhi to his east possession — in the Talass valley and provided him  the right to order a kangyuy cavalry. Besides, I gave shany in the wife the daughter, I presented some thousand camels, donkeys, horses. The Kangyuy possessor hoped that Chzhichzhi will soon break army of  Usuns and will take their possession in a valley Ili and Chu. However Chzhichzhi couldn't crush the usuns. Become  conflict between him and deceived in their hopes Kangyuy aristocrats. Soon there was a gap. According to the chroniclers, Shanyu refused to submit to the customs of  kangyuy, "in anger killed the daughter of  Kangyuy Duke, as well as famous people and hundreds of ordinary people, or throwing them into the river Dalai (Talas)." For it Chzhichzhi was expelled from a rate of the kangyuy  possessor and went to upper courses of  Talas where began to build to own city.

Chzhichzhi's strengthening and his proceeding attacks to  usuns seriously disturbed the Chinese empire.Attempt to neutralize Chzhichzhi by diplomatic way didn't crown success, and Chinese began to prepare for war.

Soon the Chinese army acted in attacks. It moved in two ways. Three groups went in southern way through Kashgar, Fergana, passes Chanach on Chatkal  ridge and Karabura on Talass; three groups went in  northern way — from East Turkestan, probably, through the pass Bedel to the Issyk kul hollow where there was usun’s rate Chiguchen, then into the  Chu valley and to Talas. The troops joined at the walls of Chzhichzhi’s city.

Despite the heroic resistance of Huns, Chinese burned an external wooden wall, broke an earth shaft, rushed into the city, took a citadel. Chzhichzhi with confidants was captivated together with numerous relatives, sons, wives and eminent princes in number of 1518 people. All of them were decapitated.

The second wave of resettlement of Huns  began in 93. They moved to the west, submitting one tribes, entraining others, got to Syr-Darya, into Aral areas , the Central and the Western Kazakhstan. In the IV century AD they appeared in Europe.

According to the majority of researchers, Huns were pro-Turkic peoples and the beginning of a tyurkization of the east Iranian kangyuy tribes is connected with their penetration into Kazakhstan.

Since the first half of I millennium BC. changing physical types of  southern Kazakhstan tribes. Appear Mongolian physical characteristics.

The leading role in Huns life took cattle breeding, especially horse breeding. Without horses the nomadic cattle breeding was impossible, in military campaigns horses not only bore on themselves horseback riders, but also supplied with food. Horses on the whole were small growth, thickset, rough brawny addition, with a short wide muzzle. They were hardy, easily climbed up on mountain more coolly and overcame water barriers. "In an ascension on slopes of mountains and descent from them at an entrance to the mountain rivers and an exit  from them a horse of the Middle kingdom concede to syunnuy horses" — the Chinese dignitary Ciao wrote . The sheep was also universal animal.  The economy system of Huns  can be called primitive, or extensive cattle breeding. They had settled life and agriculture.

In sources it is reported that "in Northern lands the icy cold early comes and though it is inconvenient to sow millet, but in the earth of  Huns sowed".

Hunting also played in life of Huns large role. Sources report about it: "Boys can go astride sheep, pull bows  and shoot birds and mice; having a little grown up, they shoot foxes and hares whom use in food. On customs existing among them, in quiet time follow cattle and in passing hunt on birds and animals, supporting thus existence".

The development  of Hun crafts is  known by the finds of metal, bone and horn, stone, clay and wood.  Existence of ceramics in burials, jugs, pots, the mugs made manually and on a potter's wheel, testifies to quite high level of development of potter's art.  Along with subjects of local production at excavation of  hun’s burials things of  an overseas origin meet. The part them got here as a result of trade: silk fabrics, the Chinese luxury goods from a tree, a varnish, a mirror, a hand-made article from nephrite.

In the Hun society features of the patriarchal-tribal relations were strong.  According to sources,  Huns  shared on 24 sorts . And at the head of  each sort there were chiefs of generations (elder).  There were a council of elders and the national assembly.  Sources report that " Huns had a usage to go to Luntsi three times in a year where in the first, fifth and ninth moon, in day, under the name "syuy" made a sacrifice to spirit of the sky. At these meetings chiefs of generations argued on public affairs, were amused a horse gallop and run of camels".However in a subsoil of a patrimonial system lines of the new public relations already ripened.  In the basis of this process lay the development of production and relations of production. One of the reasons was the development of trade and commerce. Products from the gold, expensive overseas goods found at excavation, testify the increased requirements of  an upper crust.

"Everyone too — is told in sources — has the allocated ground" which as some researchers believe, undoubtedly, treat individual farms.

Huns had  slaves who were formed from number of war  prisoners and the population of subject areas.  They were used as house servants, as shepherds, handicraftsmen and grain-growers.

Written sources report also about a form of the power and in hun society. At the head of the country was  Shanyu, who  was unlimited ruler. After Shanyu  were the lords who wore the common name myriarchs.  Under certificates of written sources, they were sons, brothers or close relatives of shanyu.  Total myriarchs was 24, and each of them had his own plot of  land for nomadic camps. In the sources, there is mention of  taxes, as a means of exploitation of the lower classes.

The appearance of private ownership of  Hun cattle and land, the addition of a primitive bureaucratic apparatus, the introduction of taxes as a form of exploitation, distribution of  literature means thet  they marked a transition to a new stage - a class society and the state.

Use of materials for publication, commercial use, or distribution requires written or oral permission from the Board of Editors or the author. Hyperlink to Qazaqstan tarihy portal is necessary. All rights reserved by the Law RK “On author’s rights and related rights”. To request authorization email to mail@e-history.kz or call to 8 (7172) 57 60 13 (in - 1163)
Қазақша Русский English
MOST READ
Month Year
Recorded history of Kazakhstan. Part 2
Heroic mothers of the great steppe
How had the World War II been started?
Philosophy of the Emblem
14 monuments at Tekturmas
The rural akims: the country's hope is in the elections
Kazakh historical drama Tomiris premiered in Istanbul
Stolypin about the worries and hopes of immigrants to the Kazakh steppes
ALASH IDEA IS THE PROTECTION OF KAZAKH STATEHOOD
A tireless explorer of the Kazakh land
SWITCHING TO THE LATIN ALPHABET – UNITE ALL KAZAKH PEOPLE
Kunaev Dinmukhamed Akhmedovich
People who eat horses will kill you
Materials on theme
Household and Saka society
Most skillful marksmen
Wooden burial-vaults of Besshatyr and barrow Issyk
Political system of Karakhanids