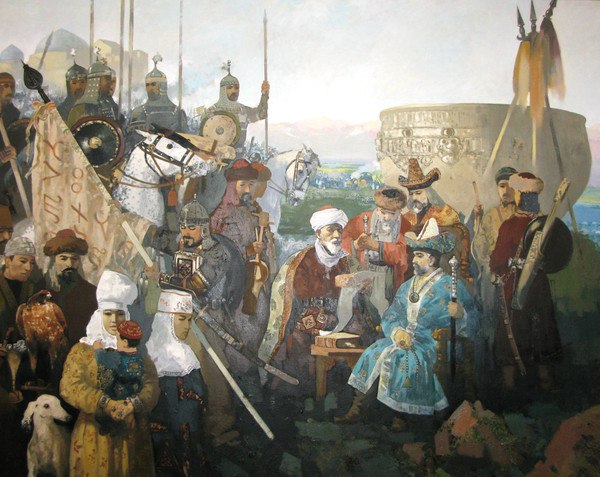 The main headquarter of the khan (orda) was the center of state and administrative board. The khan was surrounded by close to him people, including chiefs of palace guards (kapug-bashi), gatekeepers (korukch), treasurers (agnach), the crafters (idishch), envoys (yalavachi), etc. The bulk of official (tapukcha) consisted of representatives of the local nobility among whom there were many clerks (bitikchi).

Administrative structure of state was not unformed and had its own features in settled and nomadic areas. In the territory of Semirechie and Transoxiana still existed rural and city heads (mekhtara, hakima, raisa) In case of ilik-khans there were position of mustaufi (the official and the chief of financial and tax department), a sakhib-barida (the chief of mail executing and informative functions), etc.

Control of the cattle breeding population was exercised through the tribal elite, generally through the elders submitting ilchi-bashi, to baddies and khans. Ichi-basha differently called "the head of ilya". At the Turkic people the term "il" had a meaning of "people", "country" and "state". This concept was bound most mostly to the breeding associations. The rich and notable bek, who had their vassals, appeared in the role of ilchi-basha. The place of settlement of nomads, which represented "congestion of felt yurts", probably, was the center of local administration in a steppe zone. Such settlements in Yusuf Balasaguny’s poem are called "koshami".

Maintenance of an order, observation over execution of adjudications and norms of a common law (toru), protection of outline borders belonged to duties of bek.

Ilek-khans possessed a wide range of powers. They controlled the cities and rural districts of destinies with the support of an ilchi-basha, bek and khans who are under their supervision. As well as hakan, at them had palaces (karshi) and constant rates which executed a role of administrative centers. Among the nobility there was a custom of a kissing of the earth in front of ilek that symbolized dependence of the vassal on a suzerain. At the same time, it did not prevent bek, khans at all to render disobedience to ilek-khans and officials.

Development of feudal relations in Karakhanid state is the important stage of solidifying of feudalism in Kazakhstan. Ethno-political processes happening in the South and southeast of the edge played the significant role in formation of the Kazakh nationality in 11th- 12th centuries.