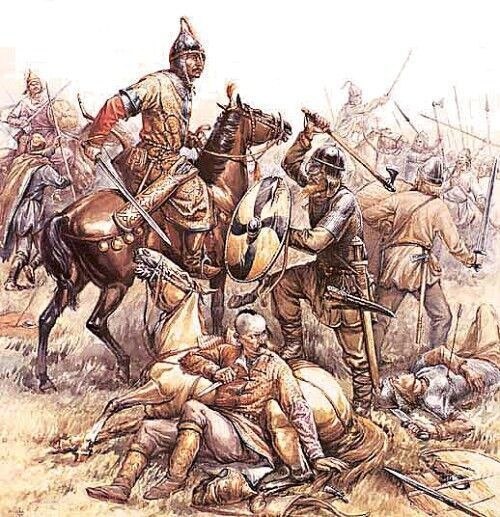 Seldzhuks intended to seize the territory of Transoxiana, which belonged to Oguz tribes. Occupying the territory of the middle flows of Syr Darya, for best pastures they started conflict with Oguz yagbu. As the result in the late eighties of 10th century part of Selzdhuks, having left middle flows Syr Darya, the remaining part was justified in steppes near Samarkand and Bukhara.

In the fight under Samarkand in 1004 the united forces of Seldzhuks of militias and Abu Ibrahim Ismail won a victory over Karakhanids. Nevertheless, Samanids did not manage to save the power in Transoxiana. It is possible that the reason for it was the disintegration of Samanids and Seldzhuks: while one Seldzhuk tribes’ leaders appeared for continuation of war with Karakhanids, others considered that it would be better to cooperate with them in the peace [1].

After the death of Abu Ibrahim from Samanids, in 1005 Transoxiana finally became Karakhanids, and Samanids themselves separated between Karakhanids and Gaznevids. The boundary of their territorial moving passed across Amu Darya.

At the same time internal war in the state of Karakhanids did not stop. The state consisted of numerous territories with unstable boundaries. Heads of these territories had the big power; they could even mint coins with the name, sometimes with the changing titles. The state consisted of east part (which included Semirechie and East Turkestan with the capital at first in the Orda (Horde) near Balasagun which else was called Kara-Orda and Kuz-Orda, then the political center was offset to Kashgar) and the western part (Transoxiana with the capital at first in Uzgend, then — in Samarkand).

If at the beginning of the 11th century east part of the country was governed by Tugan Khan, then in 1005 he was forced out from Kashgar by Kadyr-Khan Yusuf, the son of Bogra-Khan Haruna [2].

Semirechie in 1017–1018 underwent an incursion of nomad tribes from the East which went towards Balasagun. The city was protected by three months, they could inflict defeat over the enemy, but the death of Tugan Khan became an outcome of fight.

In 1026 the head of east part of the state of Karakhanid of Kadyr-han became the full governor of the state. In 1026 he concluded the military agreement with the Gaznevidsky sultan Mukhmad. Conquest of the western part of the state with center in Transoxiana which was directed by Ali-tegin was his ultimate goal. However, allies did not manage to make it.

Kadyr-Khan Yusuf’s territory included not only Semirechie but also Ispidzhab, Taraz and East Turkestan with the capital in Kashgar. After his death in 1032 send East Turkestan and Semirechye to the eldest son Bogra-tegin Suleyman who accepted the higher title of the Arslan-khan, and Taraz and Ispidzhab — to the second son of Kadyrkhan, Yagan-tegin Mahomed who accepted a title of the Bogra-khan. Both of them maintained friendship with the Gaznevidsky sultan Masoud, Mahmoud’s son. After creation of the integrated union they again tried to tear away Transoxiana at Ali-tegina, but again failed.

In the 40s of 11th century the special place in political arena was taken by Ibrahim ibn Nasr. Having won a victory in fight against Ali-tegin’s sons, he got a title of the Bogra-Khan and became in 1040 the sovereign governor in Transoxiana.