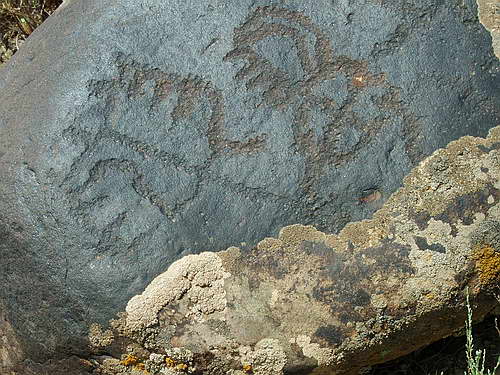 Quite often stone is considered to be a silent witness of ancient epochs. However, this is only partially the truth.

Quite often stone is considered to be a silent witness of ancient epochs. However, this is only partially the truth. When it falls into the hands of archeologist a stone assumes a voice and unwinds a clue of memories about long full of dramatic events biography of gone generations.

Outset of mankind. It is called the Palaeolithic or the Stone Age. This “age” refers to many hundreds of millenniums. Centuries took turns and ancient man each morning came out from his dwelling and, perhaps, took stone in his hands. This universal tool was necessary for our ancestor because with its help he could get a livelihood. Therefore he worked on the stone, sharpened its edges with painstaking patience. This was the first task-oriented work, the first stimulus which roused mind...

Stone tool is a creation of human hands which became the main reference point for archeologists. It helps to reconstruct historical events which seem to be forgotten forever.

Systematic investigation of a man of the Stone Age began just over hundred years ago. During this period scientists discovered a lot of sites and defined the geography of settling of ancient tribes.
Nowadays it is considered that the process of transformation of pithecoid monkey into a human being was the most active in tropics, vast area of North-East Africa and South-West Asia.

Whether ancient man existed on the territory of modern Kazakhstan?

In 1948 prominent expert in the Palaeolithic G.P. Sosnovsky taking into account accidental findings of stone tools and animals bones of quaternary predicted that “... very ancient remains of culture of pristine inhabitants of this part of Asia might be discovered on the territory of the Kazkh SSR”.
Finds of Kazakhstan’s archeologists not only confirmed this anticipation but exceeded all expectations.

Here, in the Southern part of Kazakhstan famous archeologist Kh. A. Alpysbayev discovered several sites of primitive man. The first discovery was followed by the chain of others. Thanks to the searches of A.G. Medoyev and M.N. Klapchuk the science obtained new Palaeolithic locations at its disposal. Stone collections attracted much attention. They enlarged the frames of ancient history of human beings and included several parts of the territory of our Republic into the area where the process of formation of primitive man took place.

Use of materials for publication, commercial use, or distribution requires written or oral permission from the Board of Editors or the author. Hyperlink to Qazaqstan tarihy portal is necessary. All rights reserved by the Law RK “On author’s rights and related rights”. To request authorization email to mail@e-history.kz or call to 8 (7172) 57 60 13 (in - 1163)
Қазақша Русский English
MOST READ
Month Year
From the story of a blood feud
A role of Buddhism in formation of Central Asian mythologies
Kazakh historical drama Tomiris premiered in Istanbul
ALASH IDEA IS THE PROTECTION OF KAZAKH STATEHOOD
Stolypin about the worries and hopes of immigrants to the Kazakh steppes
A tireless explorer of the Kazakh land
SWITCHING TO THE LATIN ALPHABET – UNITE ALL KAZAKH PEOPLE
Kunaev Dinmukhamed Akhmedovich
People who eat horses will kill you
Kazakhstan's participation in the Winter Olympics has a long history
Rebooting a field of science and education
Recorded history of Kazakhstan. Part 1
Historical Dates on the Bosphorus
Recorded history of Kazakhstan. Part 2
Materials on theme
Paleoecology of ancient man (hominids) of Kazakhstan
The Upper (late) paleolith
Botay culture
Archaic culture