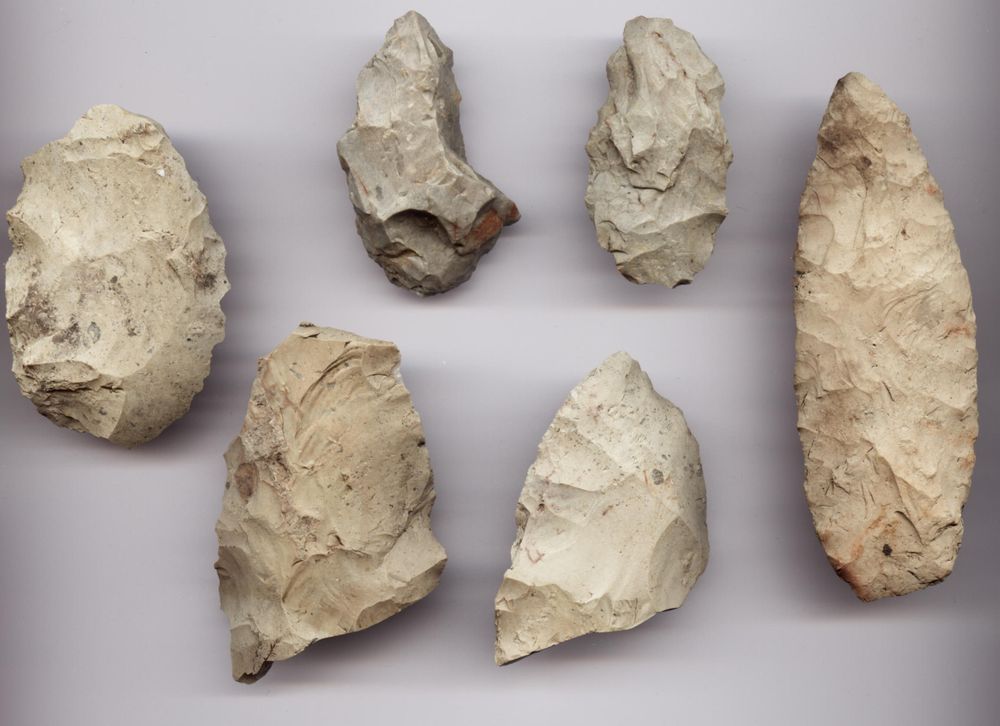 In the vast expanses of Eurasia deserts, semi-deserts and steppes for the last 15-20 years, numerous sites of Stone Age were discovered and studied.

Their chronological interval covers a piece from a Pliocene till the Holocene.

The most various types of a relief take part in the device of a surface of Eurasia arid zone, from the highest mountains and plateaus to low deserts. This is a great variety of relief and landscapes; their location in the arid zone has caused not only the variety, but also the similarity of characteristics of living conditions of ancient hominids (human ancestors).

The differences in the evolution and its duration, the development of the territory, also the evolution of hominids are characteristic for the regions of the arid zone.

Open parking spaces (ground type) dominate in the arid zone.  Many of them are complex and bear traces of ancient hominids long stay on the same geomorphic positions (often for hundreds of thousand years).

According to its position in the arid zone, size of the territory and a variety of natural and landscape zones Kazakhstan can serve as model of studying of Paleolith in Eurasia arid.

Natural disaster at the end of a Pliocene and quarternary time (1 million years) changed the whole thing. Hindu Kush and the Himalayas, Karakorum, Tien Shan and Altai became an insuperable barrier not only to monsoons, but also to completely transformed landscapes which gradually took a modern form. Growing ridges covered with glaciers and the increasing territories involved in a raising, predetermined, apparently, a mosaic in Paleolithic areas. Change of monsoons movement and cyclones, also increase of continentality in climate in an arid zone promoted desertification of the considerable territory.

Various regions of Kazakhstan in these changing conditions unequally reacted to changing conditions. The Turan and Caspian region deserts are characterized as the most stable condition places. On the coast of the Caspian Sea and the Usturt plateau were stored numerous parkings of paleolith and neolith, showing the continuous evolution from the early stages of chalcolithic to neolithic times. Paleolithic of the Caspian Sea and Ustiurt based on a silicon raw material.

The basis for the long-term evolution in the coastal zone of the Caspian Sea and Usturt plateau were palaeographic stability conditions (favorable climate, an abundance of game animals and habitats), an unlimited number of raw materials and the availability of fresh water. Topography-preserved sites of geological data confirm the repeated change of the coastline.

Sary-Arka with its own distinctive combination of low hills and plains, wide flat-bottomed valleys, was and still is the most stable area on the geomorphological conditions.

Evolution of the Paleolith here begins with sufficiently late stages of Acheulian and does not stop until the late Paleolithic.

The originality of the topography of Stone Age points to the possible infiltration of primitive hominids on the main watershed of the Sary-Arka and its further dispersal in the North Balkhash. Stability of the paleographic  conditions, becoming and, apparently, unchanging ways of animal dwelling migrations (objects of hunting) and flight of birds, numerous exits of  good raw materials and constant sources of water (springs, reaches at breaks etc.) caused possibility of long dwelling of primitive collectives, carriers of various cultures of a Paleolith on the same parking, on cones of carrying out, coast of the rivers, at deep reaches or at springs with fresh water, which is considerably defined location of parking and a movement way. Only the extreme conditions of the late Pleistocene, when it was very cold and dry (by B. J. Aubekerova) completely destroyed the drainage system.

Established relationships of animals living there and hominids leaving all these once-traditional habitats were violated on the background of developed long-term permafrost in many areas of Sary-Arka. Only in the transition zones at the periphery of Sary-Arka in Priirtyshevolution was not interrupted till the neolithic period.

Transition zones always have been objects of attention. One of the interesting transition sections is the backbone of Karatau (near Syr Darya). The peculiarity of its geographical position lies in the fact that it is, on the one hand, the tip of the ridges of the Northern Tien-Shan and it has high-altitude zone characteristic for them, and in the coldest period, apparently, had a glacier. On the other hand - it limits and separates two large areas, the sandy deserts of Central Asia and clay deserts Betpakdala. This situation persisted for Karatau for a long time, dating back to the upper Pliocene at least. This is supported by numerous relict plants and animals that survived since the Neogene.  Position of Karatau in desert caused the formation of thick sandy here (at the periphery) and the loess strata (in bowls). The geological structure of many areas of Karatau also favored permanent habitation of numerous herds of animals, the remains of which are known from many localities.

Not surprisingly, all this contributed to the habitation of the most ancient hominid, who found there the food and water sources, also good places to live on the riverside, caves and loess areas.

But probably the feature of the transition (border) regions is the fragmentariness and mosaicism of events and phenomenon. And Paleolith of mountain ridge Karatau is characterized at least by two evolution lines. The first one is characteristic for monoclinal area of Karatau Mountain and is based almost on black massive flints (Borikazgan, Tanirkazgan are the main sites). The most ancient sites are connected with tops of monoclinal-remains which once were extensive initial surface of peneplain.  More “late” Acheulean, Mousterian and late Paleolith settle down at the foot of the monoclines and have a great chronological gap with locations of an early Paleolith of Borikazgan and Tanirkazgan.

Other line developed on light grey color flints, possessing better physical properties and allowing receiving qualitative chips from preparations. The main parking lot is named after Sh. Valikhanov. Its uniqueness is that its existence is connected with history of mass plateau that was eroded by river valleys crashing into the loess and having contacts with Cenozoic sediments in their territories. Perhaps evolution of Valikhanov Paleolith dates back to the Paleolith from conglomerates at the settlement Budyonny and which is called Arestandinskaya culture by A.G.Medoyev.

There are traces of the third line of development, or line of development of the sedimentary rock (sandstones). According to geologist B.G. Aubekerov, several samples of the late Paleolith were collected around Valikhanov and on some other sites. The samples (A.G.Medoyev’s determination) resembled Scythian culture of Sary-Arka on their typological features.

Mountain regions of Kazakhstan remain to be least studied. Difficulties in studies of Paleolithic monuments here are determined by the peculiarities of sediment accumulation and the speed of relief conversion. Different natural conditions, caused by the geographic and climatic peculiarities of one or another region of the globe, were the main factors of inconsistent primates’ humanization, mostly identified differences in the ancient farm and primitive culture of inhabitants of different latitudes. They influenced on rates of the subsequent development of humanity and civilization.