Home Historical education A new comprehesion of the Kazakh tragedy

A new comprehesion of the Kazakh tragedy 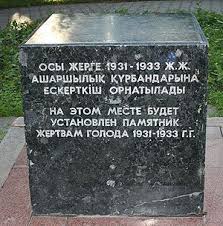 ``...the soviet government placed over the Turkestan troops And sacrificed women and children’s lives (See in Ryskulov`s, Sorokin`s and Safarov`s evidence`` Mustafa Shokhay

``...the soviet government placed over the Turkestan troops

And sacrificed women and children’s lives

New approaches, new insights on Kazakh history has formed at the present moment. In 1989, in Kazakhstan the historical and educational society "Adilet" was established(following the example of Moscow's "Memorial"). The initiators of the society were prominent scientists as Manash Kozybayev and Beibit Koyshybaev. The society "Adilet" has set a target to show the importance of tragedy of great famine in the national level and the rehabilitation of victims of political repressions of 30s of the twentieth century. In 1992, the "60th anniversary of the tragedy of 32-year" was organized by the historical search expedition (Al-Farabi Kazakh National University) and  «An Open Letter to the descendants of Alash» Smagul Elubayev was published.

Despite the difficult social-economic situation, a special state commission of the Presidium of the Supreme Council of the Republic of Kazakhstan was established in November,11 in 1992 in Kazakhstan , then the decision on the results of activities of the Commission on studying of the following documents was published in December 1992:

Policy decisions of the Central Elective Committee and the Council of people`s party of the Republic from August 27, 1928 «On the confiscation of bays` farm», from September 13, 1928 «On the confiscation of bays` and semi-feudal lords, and criminal penalties for resisting for resettlement policy», from January 19, 1930 «About rates of socialist construction in areas of continuous collectivization and measures for fight against a kulachestvo and a baystvo».

In April 14, 1993 there was a Law on recovery of victims of mass political repressions, in 1995 at the meeting of National Council on the State policy the President of RK approved«the concept of formation of historical consciousness of citizens  in the Republic of Kazakhstan», in December 30, 1996 there was a Decree of the President of the Republic of Kazakhstan about the announcement that « the 1997 is the year of National consent and memory of victims of political repressions», according president`s order on that  May 31, 1997 is the day of memory of victims of political repressions, the president send a message to Kazakhstani people  «Let our future to be bright». The specified official documents and materials became the main vector of new scientific researches.

At the same time, at the present stage there is a number of the topical issues which have not been removed from the agenda. It is a comprehensive, detailed study of the tragedy of collectivization and mass political repressions, establishment of the day of Memory of victims of famine of the 30th years.

As it was noted earlier, «Priorities of historical knowledge», «Problems of a historical science», «Prospects of historical education and education» were defined in «the concept of formation of historical consciousness of citizens»,which was established in 1995 by National Council on State policy .

In a context of these directions before a historical science of Kazakhstan there was a task of objective consideration of history of Kazakhstan of the Soviet period, including history of famine and political repressions. In Ahmet Baytursynov's well-known article «Revolution and Kirghiz» it was emphasized: «as far as February revolution was clear to Kazakhs, realities of October revolution» were so unclear. Really, after February revolution of 1917 aspiring to the power Bolsheviks subordinated masses by deception, fear and violence, creating new society.

Negative attitude of the Kazakh population to October events, Ahmet Baytursynov explained to those, «in the Kazakh society there is capitalism, therefore, no class stratification», Mirzhakyp Dulatov emphasized that it is impossible to divide  «the Kirghiz Kazakhs» into capitalists, workers. We do not have factories, there are no millionaires in our land as in Europe. Our people don't share on a blue blood, a black bone, fights, working, (land owners, landless (can propertied and deprived). A basis of life of people here is a large – cattle breeding. The Kazakh land never was in a private property» [1,12].

1917 is the period of dramatic political events, proceeds the First World War of 1914 which has involved in its orbit about 38 states of the world, an economic and social situation of Russia extremely difficult: the problem of land, which was very crucial especially for rural people of the empire wasn't solved, the resettlement policy proceeded, liberation movement of the 30-million Muslim population of the Russian Empire amplified.

In a situation when in the center of Russia the diarchy was established, and on suburbs of the former empire there were numerous independent governments, Bolsheviks considered various versions of the statement of the power in the hands. In search of a reliable social support Councils choose counteraction tactics to policy of Provisional government «about absolute war». In September-October, 1917 Bolsheviks put forward slogans: «Land is for peasants!», «Plants and factories are for the worker!», «National equality is for the oppressed people!». In other words, the put-forward slogans about «the war termination», «investment with the earth», «providing with bread» met the most essential requirements of masses therefore the population gave unconditional support to Bolsheviks, thus not absolutely understanding their strategic objectives.

Published on October 26, 1917 at the Second All-Russia congress of Councils, V.I.Lenin's Address «The Soviet power... grants the right to self-determination to all people occupying Russia», adoption of decrees «About the world», «About the earth» completely justified hopes of the majority of the population, had the huge importance for strengthening of authority of the Soviet power.

Leaders of Alash hoped for the solution of the major for the Kazakh population problems (the national and state construction, land, resettlement policy, violent acts of Russian Cossack groups, etc.)by  Provisional government. They treated the decision Councils of the matters on the basis of a class approach with some doubts [2, 133-134].

Mustapha Shokay provides Zhusipbek Aymauytov's following characteristic about a situation in which there were Kazakhs in the first years of the Soviet construction: «war, revolution, robberies, hunger, national independence, autonomy... the Kazakh - Kirghiz to the people did not guess about it, suddenly they were appeared to be in embraces of hunger and extreme poverty (Kirghiz Kazakh)... such understanding of a socialist revolution sounded at congress of employees of political and educational institutions in Kyzyl-Orda» / Shokhay M. (the characteristic of dictatorship of the proletariat) [3, 142].

«The policy of mass repressions was carried out command system against «class enemies», "nationalists", "dissidents", «social and alien elements» at this time 44 representatives of the alash intellectuals, there were Zhusipbek Aymauytov, Abdrakhman Baydildin, Dinshe Adilov were subjected to repression sentenced to execution (the sentence is carried out). The others received various imprisonment terms» [4, 603]. Here it is necessary to tell about «lists of 520 alashordynets» which were found in the list of archives[5]. Lists contain a number of data which for the various reasons didn't reach the mass reader.

The Movement history of Alash, destinies of the subjected to repression representatives of national elite are object of the deep scientific analysis of the professional historian Mambet Koygeldiyev which divides political repressions into five stages:

5) 1985-1991 – begins with business on «the Kazakh nationalism» in D.A.Konayev's board («The Kazakh business»), comes to an end with repressions against Decembrists.

The author comes to an important conclusion: the last stage is characterized by signs of obvious crash of socialist system, thus a totalitarian mode shows the frailty without continuous repressive actions [6]. Such is the history of «permanent political repressions» of the Bolsheviks, originating since far 1917.

In mass media there is often written that the policy of violent collectivization was the tragedy not only the Kazakh population, but for the people of the Volga region, Western Siberia, Ukraine, Belarus and others too. In the last publications of the historian-demographer of M.Asylbekov «All-Union census of 1933-1937 (confidential)», there are different data on population of the Soviet state. In 1933 there were 168 million people , then in 1937 – 180 million, and 162 million people [7]. The coded census of 1937 should hide from world community original figures about number of victims for hunger and mass political repressions. Number of the Kazakh population in the first quarter of the XX century was defined in 6 million people, in days of famine and repressions more than a half of Kazakhs was lost. Modern researchers give higher indicators of victims. For example, well- known historian K.Esmaganbetov writes:« by not considering the number of children who were not born, Kazakhs lost about 4 million people in 1932-1933 » [8, 114].

Tragic events of were at the same time as  first five-years period of the Soviet power were in 1932-1933. The eminent person of Alashorda – Alimkhan Ermekov wrote about this period: «October revolution entered the legitimate rights in Kazakhstan, since 1928. During this period bases of steppe semi-feudalism and arising capitalism were destroyed. People who knew the policy sphere earlier should help the Kazakh society to pass the tests of tragic time» [9, 202].

These years F.I.Goloshchekin's was in power (1925-1933). Developing the theory of «Small October» (the Great October generated by influence),he ruthlessly put out  political opponents. As a result of this policy, practice of traditional Kazakh cattle breeding fell into decay.

The cattle livestock was sharply reduced, data on which number were filled with exaggerated indicators. For example, in 4-volumes of evidences of a personal record of Abilkhayir Dosov it is shown: «In 1930 the commission on the accounting of a livestock of cattle, for the purpose of implementation of the plan of preparation of meat (the chairman O. Isayev) was created. The commission nullified Z.Toregozhin's data about 4-4,5 million livestock of cattle, spread information on existence about 14-15 million heads of cattle. In regional committee information on 21 million beasts was supplied. Z.Toregozhin who has brought real figures to Kazkraykom's bureau was subjected to destroying criticism» [10]. Reduction of number of a livestock was influenced by also weather conditions, jute, epidemic diseases of cattle.

During this period on the arena of historical events of 1930 there were prominent representatives of the national intellectuals as T.Ryskulov, S. Sadvakasov, O.Isayev, N.Nurmakov, S.Kozhanov, Z.Mynbayev, known as Kazakh "nationalists". «The state independence, national-liberation movement, land problems and  other political problems got second breath and new direction by representatives of the alash intellectuals as T.Ryskulov, S. Aspandiyarova, S. Kozhanova's activity. S. Sadvakasova, Z.Mynbayev».

In the statement of a totalitarian mode, in new political conditions of the resistance movement has development in emigration. Mustapha Shokay's activity is an evidence, who had been issueing the Yash Turkestan magazine for 10 years (1929-1939) in Berlin , publishing in it actual materials [11,249]. It is known that for 20 years of emigration Mustapha Shokay carefully studied the materials concerning the historical homeland, gave the analysis of all actual problems and events.

He also took into an account famine in  Kazakhstan. So in 1918-1922 in the magazine «New world» the article «Hunger at the Kazakh edge» was published. Mustapha Shokay writes that its  author isn't Ahmet Baytursynov. The Soviet censorship changed article to 99 % as A.Baytursynov never writes articles in which the real facts don't represent the facts, - Mustapha Shokay [12] draws a conclusion.

Great hunger of 1932-1933 captured the Kazakh steppe, T.Ryskulov, O. Isayev, G. Musrepov, M. Gataulin, M. Dauletkaliyev, E.Altynbekov, K.Kuanyshev and other Kazakh intellectuals in the missives wrote to Moscow (to I.V.Stalin), Kyzylorda (to F.I.Goloshchekin) about its reasons, economic and demographic consequences.These written sources are known in the history as «The Letter to Stalin», «The letter of five».

Tursynbek Kakishev writes: «In 1936, in January 10 in the city of Minsk on plenum of the Union of writers of the USSR Saken Seyfullin underwent unexpected criticism. The poem «Kyzyl аt» in which the poet showed the tragedy of the Kazakh steppe brought him into trouble. [13, 352].

In the conclusion I am desirable to tell – Kazakh people survived, stood in tragic days of famines, wars, but couldn't take out the tragic hunger during the domination of the Soviet totalitarian mode. Unfortunately, economic and demographic consequences of tragic events are still felt. To remember bitter lessons of history, million victims of great hunger is a duty of descendants.

Leading research fellow of the Institute of State History