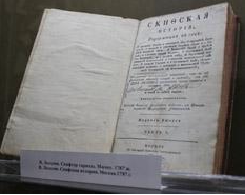 Museum of Rear Books counts more than three thousand exhibits, including five hundred unique historical documents, poems, legends and declarations of love, some of them have no copies.
Nowadays everybody can partake to the ancient times. It is necessary just to visit the expositions of the «Gylym Ordasy» RSE. For example, I had an opportunity to look at the volumes and ancient manuscripts in the Museum of Rare Books, which stores the richest writing heritage of Kazakhstan.

Museum staff calls their «Muses temple» «Treasures from the past». As the Museum of rare books counts more than three thousand exhibits, including five hundred unique historical documents, poems, legends and declarations of love, some of them have no copies. The authors of these literature memorials are Hoja Akhmet Yassavi Balasaguni, Yusuf Balasaguni, Mohammed Haydar Dulati and many other stars of the East.

Meanwhile, the Museum not only collects and carefully stores the heritage of Turkic world, but also popularize the creativity of great intellectuals. The translation of runic writings, discovered near Orkhon and Selenga rivers in Mongolia is a very special activity. The runes were printed at high stone pillars, one of which is a memorial complex in honor of Kultegin, Khan of the Second Turkic Khanate. Among the feats and laudatory odes to the great commander it is possible to read something like this: «If you are a wise Kagan, but advisor is a fool, then beware». Apparently Tonyuquq, the author of those lines, tried to convey the management experience to the future crown prince. But without enormous labour of turkologists, including Thomson Melioranskii, Barthold and Radlov, may be still scientists wonder the Kultegin’s will.

However, do you know that in VI–VII centuries every educated citizen of khanate, in contrast to us, could without any difficulties read his massage? It turns out that the Turkic literary language was the only on the territory of the whole Empire, and only dialects could complicate its perception. This also became known thanks to a five-volume Turkic heritage, stored under the roof of the museum. This work contains a complete description of the culture, literature and folklore of all Turkic nations. 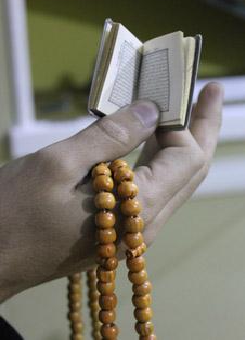 The Museum of Rare Books is not just a place of pilgrimage for specialists in Turkic studies, but also a storehouse of knowledge for linguists. Where else you can find Verne’s «The Mysterious Island» and Gogol’s «Dead Souls» in Kazakh language and Latin script? Nowhere; these books have the only copy and are of a global value.

However, the fact that the «Genealogy of Turks» is written in several languages is not surprising. Because the alphabet based on the Cyrillic graphics was adopted only in 1944. Prior to that Kazakhs wrote mostly with Arabic characters and Latin script. So at the museum one can find volume of Abai even in Latin, despite the fact that the alphabet had been used only for 15 years.

At the same time, Persian poetry lovers can enjoy the poetry of Omar Khayyam, reprinted in 1926 in Istanbul. More romantic natures will appreciate the «Thousand and One Nights» storybook published in Tashkent in 1913. And do not be confused when see strange symbols, every now and then encountered in the text, among Russian translations. These are so-called transcriptions. They were used to convey complex vowels and diphthongs of Turkic language. 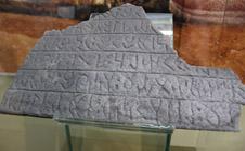 And, of course, among the hundreds of reliquiaes, sacred books stand out. I encountered various designs of the Koran on the museum shelves including bound in leather, with jewels on the flyleaf, with silk bookmark… . While the sizes of the Koran also varied from huge (70×50 cm) to the tiny books of 10×5 cm. And, the interesting fact is the suras are written in one calligraphic style called which in Arabic means «copying».

It can be seen that the medieval writers sought and carefully withdrew every flourish. However, they had no right to make a mistake because at the period of the Caliphate the violation of written canon was punished severely by Sharia court. And the hands of bad scribblers, as a rule, were cut off. By the way, still the holy book of Muslims is copied in the «Soultz» style. The only thing that complicates the definition of the Koran’s «age» is the lack of dating, according to the canons of Islam.

There is a paradox — at the Museum of antiquities and ancient books you will not find any age-old dust. It is absolutely contraindicated for manuscripts as it decomposes them from inside. The deal is that it contains bactericidal fungi. And if even one «infected» book gets to the museum, then other editions also become «ill». So before a book is put into showcase, it is treated with a special chemical solution. In general, books storage is a complete science. Scientists claim that even under favorable storage conditions paper does not live longer than three hundred years. Ideal conditions for books storing, according to the experts, are air temperature of 18–22° C, relative humidity of 50–65 percent. By the way, the same conditions are comfortable for humans.

Timur Talgat, the museum scientific fellow:
— Nostallik, Persian style with twisted ornament-shaped inscriptions, can be found among the many types of Arabic script. There also are Kufi, Naskh, Ruqyah and Divan. But I like the first one most as it is very graceful and majestic. For example, the rare and valuable «Arabic Grammar» was written exactly by Nostallik, and the «Tales of Genghis Khan and Tamerlan the lame» (Kazan, 1819) was in the style of Nazkh. 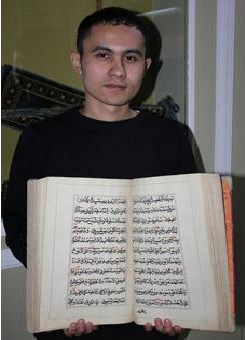 There is one more thing. Very soon the restoration studio will be opened under the Museum of Rare Books. Who knows, maybe, the Orkhon runes, which were considered to be lost, would be restored and decipher there…

Oleg BOLDYREV, photos of the author