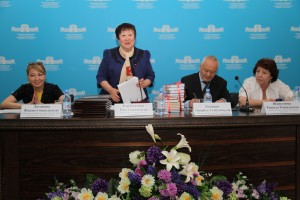 May 17, 2013 in RSE «Gylym Ordasy» was organized a series of events to mark International Museum Day.

May 17, 2013 in RSE «Gylym Ordasy» was organized a series of events to mark International Museum Day.
Opening of the celebration marked with the solemn meeting, which was held under the theme «The role of museums in the new society» and brought together the leaders of the city’s museums, representatives of municipal bodies, the Kazakhstan Tourist Association and tourism companies, UNESCO and others.
The main purpose of the event was to determine the value and role of museums in the new society, to discuss new trends in the development of museums, the application of new technologies, to examine the challenges of museums in modern Kazakhstan.

With the welcoming speech, the General Director of RSE «Gylym Ordasy» Roza Karibzhanova said: «Museums at different times were considered an integral part of social and cultural life in many countries. They are the keepers of history and centuries-old traditions of the various peoples and states, heritage institutions and cultural heritage». However, she stressed that the interest in museums increases every day.

«This is evidenced by the numbers. Only in four months 10 thousand people visited Gylym Ordasy», — said R.Karibzhanova.
Noting the undeniable role of these institutions in the education of moral and patriotic values and the formation of the historical memory of the state, the participants of the meeting as a key priority the development of museums identified according to their modernization challenges of the time with the introduction of new technologies in their work. Museums in the modern world should be subjected to a significant transformation in its content and activities, according to museum experts.
«We have to move with the times, to learn from their foreign counterparts. Our time — a time of innovation. And if we want to raise the prestige of museums, attract the interest of society, it is necessary to introduce new methods of work, to organize activities in accordance with modern standards of exposure of our cultural values,«- said an assistant professor of archeology, ethnology and museology Kazakh National University named after Al-Farabi Tattigul Kartaeva.

As new developments in museum practice, widely used in other countries, the participants noted the demonstration of documentaries about the museum exhibits in the format of 3D, 5D and 7D; the creation of so-called «live» exhibits when ordinary stuffed animals through special devices emit a voice and mimic some of the movements and habits.

In addition, it was suggested to ethnographic museums of Kazakhstan, telling about the culture and traditions of different peoples, to put into practice the demonstration of some customs and rituals, as well as treat the national dishes, which, according to experts, will not only give a clear idea about the culture, but also have a positive impact on the growth of visitors numbers.

However, museum experts have noted that there are some difficulties in recruitment and updating of museum exhibits. For example, the organization of scientific expeditions requires certain financial costs. According to participants in the meeting, in addressing this issue the role of patrons is invaluable.
«We need to develop the charity among businessmen in order to expand the museum collections. This is a common practice in the world community, when patrons help buy the exhibits representing the value of the antique shops or from other countries», — said T.Kartaeva.

Along with the development of museums, special attention was given to the participants of the cultural heritage of Kazakhstan of the global museum community. In this aspect, the importance is not only participation in international trade fairs and exhibition of museum treasures in the world of exhibition venues, but also the formation of museums in the country as one of the most important components of the tourism industry.

«How can travel companies work for PR and image of other countries to promote attraction of foreign countries, when one of the conditions for issuance of license to operate a clear knowledge of the acts and the promotion of the attractions of the state, including the museums», — said Head of Culture and development of languages akimat Medeuski region Jeanne Dosanova.

In its turn, the director of the Kazakhstan Tourist Association Rashid Shaikenov agreed that it is essential to promote among the citizens of other countries Kazakhstan museums, which are one of the main sources of information about the history of the state. However, according to R.Shaykenova, today, outbound tourism is most dynamically developing in Kazakhstan.

«As a result of the financial and economic crisis, 2008–2009, the rate of inbound tourism has severely decreased. Today, a significant portion of foreigners arriving in Kazakhstan are business people who come to our country with specific business objectives», — said R.Shaykenova.

Meanwhile, under the solemn meeting laid the foundation for cooperation in the preservation and promotion of historical and cultural heritage of the Republic of Kazakhstan between the Kazakhstan Tourist Association and the Republican State Enterprise «Gylym Ordasy» was signed a memorandum on mutual cooperation.

The solemn meeting completed with ceremony of awarding letters of thanks of the Committee of Science, Ministry of Education and Science of the leading museum workers of Gylym Ordasy.
A series of celebrations continued meeting of scientific and museum community with a doctor of philological sciences, professor and academician of the National Academy of Sciences of the Republic of Kazakhstan Shora Sarybayeva.

At the opening of the meeting, CEO of RSE «Gylym Ordasy» Roza Karibzhanova said: «In Kazakhstan, there is no man who does not know Shora Shamgalievich. He is well-known scientist, holder of medium golden fund of Kazakhstan and the largest collector. He is the live memory of a generation of great thinkers and scientists, which included Mukhtar Auezov, Kanysh Satpayev, Saken Seifullin, Beymbet Myleene and Zeinolla Kabdolov».

The academician shared memories of his life and work.
«We grew up in the Soviet era, when the Kazakh language is predicted no future. My brothers and sisters were educated in Russian schools. Only I studied in Kazakh school. My father always told me that we must not forget its roots, it is necessary to know and to work on the spread of the native language»,- says Sh. Sarybaev.

The scientist dedicated his activities to study of the Kazakh language the development of its dialects and lexicology, as well as the popularization of the company.
The scientist says that working on the compilation of work by Turk-Kazakh bibliography, he took a special place research Ahmet Baytursynov. The bibliography was 6 volumes and was accepted for publication in the print shop. However, later, it was destroyed the author was able to save only one copy.

Along with its core activities, for many years Shora Sarybayev engaged in collecting. He is the owner of eight collections, including the collection of works Chokan Valihanov. Collection devoted to numismatics Turkic peoples, meeting badges, postcards, stamps, books and information about traditional medicine. Separate collection is devoted to the development of football in Kazakhstan, a scientist, even a photograph of the first Kazakhstan football team, which included M.Auezov.

Interest is the collection of information about Kazakh batyrs (heros). They were 300 people.
At the end of the meeting Shora Sarybayev congratulated museum workers with the upcoming professional holiday and donated to the Museum rare books and a number of his works to Museum of the History of Kazakhstan science RSE «Gylym Ordasy».

Immediately after the meeting with the scientist in RSE «Gylym Ordasy» a master class for the restoration of rare books, and archaeological artifacts, which were conducted by specialists of the National Library of conservation and archaeologist at the Institute of Archaeology Ruslan Sherbayev.
Restorers of high categories demonstrated how to restore maximum integrity of archaeological finds, as well as to restore the book, providing the duration of their existence at least 30 years before the next restoration.

Masters noted that perfection in giving the ancient artifacts and books image as close as possible to the original, possibly, requires only patience and love for his work.

Within the celebration of International Museum Day an exhibition of butterflies, collectors, coin collectors and artisans was held.

In addition, on May 17–18, the doors of museums «Gylym Ordasy» open to all those wishing to explore the unique history of Kazakhstan and its rich cultural heritage.