Al-Farabi and his scientific heritage 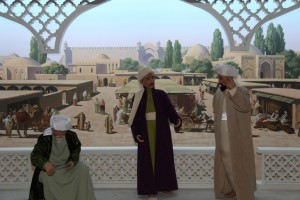 It operates a relatively short time, but has a great future as a unique and the only museum of its kind in the country. This is place where visitors can learn about the history of formation and development of scientific thought in Kazakhstan, from ancient times to the contemporary science of Kazakhstan.

A special place in the museum exhibition dedicated to the great scientist, philosopher, mathematician, music theorist and native of Kazakhstan — Abu Nasir Al-Farabi.

A person starts to learn about his life and works at school. Everyone knows that the interests of the scientist were versatile. He was interested in astronomy, logic, theory of music, mathematics, sociology, ethics, medicine, psychology, as well as philosophy and law. It was an accident that he was awarded the title of «Mualem Assana» — the second teacher.

Al-Farabi’s portrait is exhibited in the museum showcase. This is how his image reached today. He died in Damascus at the age of 80 and was buried in the so-called «Small gate». The museum has scholar’s grave photos in Damascus. The visit of Al-Farabi’ grave by the President of Kazakhstan Nursultan Nazarbayev and the Supreme Mufti Haji Absattar Derbisali was also captured.
Al-Farabi was a truly world-class person.

In his works he brought together the most valuable achievements of Arabic, Persian, Greek, Indian and Turkish culture. Influence of the latter is particularly clearly visible in his famous «Kitab al-musical-Kabir» («Big Book of Music»). Thus, in the museum’s exhibition features pages of «Big Book of Music»: this image of a musical instrument and sheet music.

Al-Farabi was not just humanities scholars, who brought together various cultural traditions. Inside of him lived a genius science reformer who sought to systematize the knowledge of his time, which is reflected in his treatise «Slovo o klassifikacii nauk» (original in Russian «Слово о классификации наук»).

In addition, Al-Farabi was credited in creating Otrar library. Thus created in the museum diorama brings us precisely in this same library. When you look at the scientist, conversing with his pupil, it seems that you can hear his soft voice, to talk about philosophy or mathematics, and maybe music. No wonder sitting behind them reads sage treatise Al-Farabi «Bolshaiya kniga musyki»(«Большая книга музыки»). Meanwhile, outside the windows of the library noise bazaar, there is a brisk trade, lie near the camels, had brought on his back in the caravan bales of goods.

Great philosopher said that man became man through the mind, so that «whoever seeks to basics science wisdom, you must (a small nail) be of good character, well-mannered, study the Quran and Science of the Law in the first place. Be prudent, chaste, conscientious, honest, repulsive vice, corruption, betrayal, lies and tricks. Be free from the interests of subsistence mind, approaching the fulfillment of the legitimate purposes without violating the legal framework and support without breaking any of the rules of the Sunnah and Shariah. Strive for exaltation in science and among scientists, not choosing science for several achievements and acquisitions, without choosing it to acquire material goods».

As they sound true these words of philosopher are relevant today. Acquisition of knowledge, the pursuit of high academic achievements, new discoveries — that’s what young people need to be competitive in our time.