Home Expert opinions «History — a treasure of our deeds…»

«History — a treasure of our deeds…»

I was honored to participate in the extended meeting of the Interagency Working Group for the Study of National History, under the leadership of State Secretary Marat Tazhin.

I was honored to participate in the extended meeting of the Interagency Working Group for the Study of National History, under the leadership of Secretary of State Marat Tazhin. His report contained interesting conceptual ideas. The meeting was a landmark firstly, because it was the beginning of a new stage in the development of national historical science. The holding of such large-scale forums, in my opinion, puts a huge responsibility on the science of Kazakhstan. The algorithm of the movement was defined by Strategy «Kazakhstan-2050», in which the President of the country — the nation’s leader Nursultan Nazarbayev clearly indicated guidelines for the development of our state.

During the collapse of the Soviet Union, I mean 90 years of the 20th century, collapsed not only political life, but also there was a lack of basic food and clothing. Then many people embraced despair. Only an iron will and confidence of the First President of the country has allowed us to get out of this state. It was under his leadership in Kazakhstan were held profound economic and political reforms, established stability.

In that period, Kazakhstan had an opportunity of freedom both political and economic. Developed a multi-party system, there were free media, science also become free. Impulses, set in that period, were deep and very fruitful — domestic market started to work, industrial enterprises raised from «knees» up. As a result, the social situation in Kazakhstan began rapidly improve. Despite all the great difficulties, Kazakhstan has managed demarcation and delimitation of its frontiers.
Moreover, in Central Asian some countries still have not solved these issues. For Kazakhstan as a young state this achievement becomes a global success.

Thus, we have taken a worthy place in the stream of history. Sovereignty gave Kazakhstan a tremendous impetus to the development of national historical science. Ideological barriers have been removed, scientists finally got freedom and an excellent opportunity for in-depth research, disclosure of the so-called «white spots», to participate in targeted programs, including «Cultural heritage» and «Gylymi kazyna». Archive funds and valuable manuscripts became available to us. The state began to restore of artefacts, including Sultan Baybars in Damascus, began to publish new monographs and collections. Law «On Science», which recognized the new management model of scientific sphere, has further strengthened the position of scientists.
Great Spanish writer Cervantes said: «History — a treasure trove of our deeds, witness of the past, example and lesson for the present, the warning for the future».
His thoughts, expressed in a completely different time, are relevant today. For further development of historical science in Kazakhstan we first need to overcome the fragmentation of historical research, upgrade their quality and methodology. As the Secretary of State pointed out, in the last two centuries of European history two methodological revolutions has survived. And our history is still act according to old patterns. At the same time we must not forget that history like no other has a huge responsibility to society. After all, knowledge of national history is the main base and a source of patriotism and love for the Fatherland. Second, the main vector of development of historical science should become a systematic and comprehensive research. This requires a whole new level to develop a common concept of the history of Kazakhstan. Also, to develop the science of history closely linked with world history, to achieve a clear understanding of the place of Kazakhstan in the global historical processes, system and their relationship scientific periodization.

History of our motherland should be integrated and recognized in the World of Science. «Bolezni rosta»(«Pains of grow»), about of which are often scientists say that they are necessary to overcome. Thus, meeting held on June 5, I think the turning point in this process. Thirdly, the Kazakh historical science is still in the grip of the same methodological schools, exploring only the narrow confines of national history. It is a time to broaden the horizons of the historical past of the Kazakhs. Intensive processes of ethno-genesis of the ancient Turks, the population of the Golden Horde — all of these historic periods should actively explore and rethink. For purposeful study of the past the Ministry of Education and Science together with the Ministry of Culture and Information sent a large group of scientists who will thoroughly examine the archives of China, Iran, Turkey, Arab countries, Mongolia, Russia and UK.

Work on the study of ancient and early medieval period of Kazakhstan by monuments of material culture will be continued. In my opinion, it is necessary to introduce a faster turnover of the most important documents of our past, greater use of information sciences such as anthropology, genetics. In the organization of important studies have a role to play not only research institutes and departments, but also associations of historians, especially historians Congress of Kazakhstan.
At a meeting of the Interagency Working Group also discussed the preparation of textbooks and reading books on the history of Kazakhstan, which will reflect the most fundamental provisions of national history. Groups of experts have been formed and working on the project books. Prominent scientists were included in this important project in order to attract more scientist and teachers. The latest period of our history is remarkable because all ethnic groups live in Kazakhstan and together participate in the construction of an independent state.This fact is worthy reflected in surveys of my colleagues — Azimbaya Ghali, Kamal Burkhanova, George Kahn, Ziyabek Kabuldinov and others. Further, to form the nation’s history, in my opinion, we need a number of major organizational measures. As the State Secretary Marat Tazhin said, there is a need to stop reduction of history of Kazakhstan faculties. For example, how do you explain the abolition of even large universities specialized departments of national history? Moreover, university presidents themselves often reduce quotas allocated for students of non-historical disciplines.
This reduction tendency is risky as it can swipe the construction of historians’ housing in the future. These and many other tasks require from us a great effort, unity and the desire to increase the wealth of Kazakhstan. Today we stand on the threshold of great social change, in fact, are witnessing the birth of a new civilization structure in which fundamentally changed the world of work, management, education and leisure. In our society there are significant changes in the perception of the world. In reality, not only domestic, but world history today stands on the threshold of a new stage of development, which is due to the current global challenges in the financial, political and humanitarian spheres.Historical science of Kazakhstan also has to solve fundamental issues that require new approaches and rethink the historical process, the formation of a new historical thinking. In this regard, I think it is no coincidence that in his speech at the 20th session of the Assembly of People of Kazakhstan President said: «In the context of global challenges adequate answer we can give only if the preservation of our cultural code: language, traditions, values…» and to «… raise the proper level of national spirit, it is necessary to clearly understand what our real story…»
The task set by the President, should become an imperative activity of Kazakh historians. During the years of independence certainly a lot thing was made.
However, at the same time there are key issues that hamper the development of historical science. Focusing on some of them, as I see it, the most important task should be identification of the main ways of further development, taking into account the major achievements of world experience. The world science accumulated considerable knowledge base, which unfortunately has little demand in the domestic science.

Another sore point is the aging of scientific and teaching personnel in this regard — the shortage of specialists. In addition, studies of Soviet period and modern era are very topical.
The particular importance exactly of the newest period of Russian history, which began in 1991, when there have been radical political and social changes in Kazakhstan should be distinguished. I think in this regard would be appropriate organization of forums for domestic and foreign scientists at the Institute of History of State to decide the fundamental questions to clarify the periodization of national history and other scientific problems.
I would like to point out that only by joint efforts of representatives of all the social sciences and humanities we can promote our main goal — formation of all-Kazakhstan’s historical consciousness. By now the turn of the historians did not come empty handed — a powerful state support has enabled us to overcome the kind of «Rubicon». The conclusions and tasks assigned on the meeting of the Interagency Working Group show that today we went to a new level of scientific research. 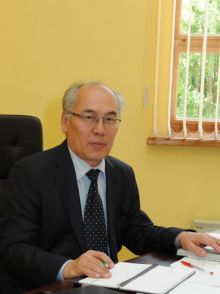