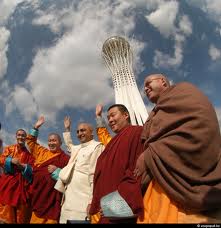 Penetration of the Buddhism into Central Asia from India, through territories of Pakistan and Afghanistan began with the middle of the I century BC.

According to researchers, penetration of the Buddhism into Central Asia from India, through territories of Pakistan and Afghanistan began with the middle of the I century BC. From II-III centuries AD the doctrine of the Buddhism was actively widespread by missionaries among whom sogdiyets prevailed.

On all ancient Silk way (the territory of Kazakhstan, Uzbekistan, Turkmenistan and Kyrgyzstan) are found numerous monuments of the Buddhist culture, the most known among which became Karatobe II-III monastery of centuries in Termez; cult construction in Sanzar's valley in Smugda; complex of monuments in Mary; Buddhist monastery Adzhina-tep VII-VIII centuries in Tokharistan; the Buddhist temple in Kuva (Fergana), temples of Joint stock company-Beshima and Red small river in Semirechye (Zhetysu). The great interest is presented by excavation of two large Buddhist temples to the ancient settlement of Joint stock company-Beshim (it is ancient Suyab), located in the Chuysky valley. Sculptures of the Buddha, the image of characters of a Buddhist pantheon are found in temples.

From VI century the Buddhism had considerable impact on Turkic peoples. In Semirechye and the Southern Kazakhstan archeologists found temples, monasteries, chapels, and also figurines and steles with images of Buddhist characters and scenes. Similar monuments are also found in the Talas River valley near Shymkent, and also in Zhambylsky area – in Tekturmas and Balasagun. Near ruins of the known medieval city of Isfidzhab (Sayram) the underground Buddhist monastery is found.

Distribution in Central Asia the early Tibetan Buddhism was promoted by the Chinese influence. In the VIII century Tibet was the powerful state under which control there were many neighboring lands, including East Turkestan and part of Kyrgyzstan.

After in X century Islam was declared by the state religion of the state Karakhanidov, the Buddhism started losing the positions. However a certain influence of the Buddhism remained and in the next centuries. In the XVI-XVIII centuries the Buddhism began to extend in Kazakhstan in connection with resettlements and attacks джунгаров. Monasteries of an era of the Dzhungarsky khanate are found in Semirechye and steppe regions of the Central Kazakhstan. It is known also that at the beginning of the XIX century in the natural boundary of Medeo near Almaty the wooden Buddhist monastery was constructed.

Archaeological monuments are images of several Buddhas and Buddhist texts on rocks in the natural boundary Tamgaly-Tas in vicinities of Almaty. Time of creation of images is defined in the wide range – from XII to XVII-XVIII centuries.

In 1996 in Uralsk the Tibetan and Buddhist center was founded. Following the results of a re-registration of 2012 in Kazakhstan works 2 Buddhist religious associations in Almaty and in the West Kazakhstan region.

Use of materials for publication, commercial use, or distribution requires written or oral permission from the Board of Editors or the author. Hyperlink to Qazaqstan tarihy portal is necessary. All rights reserved by the Law RK “On author’s rights and related rights”. To request authorization email to mail@e-history.kz or call to (7172) 79 82 06 (ext.111)
Қазақша Русский English
MOST READ
Month Year
Recorded history of Kazakhstan. Part 2
Heroic mothers of the great steppe
How had the World War II been started?
Philosophy of the Emblem
14 monuments at Tekturmas
The rural akims: the country's hope is in the elections
Kazakh historical drama Tomiris premiered in Istanbul
Stolypin about the worries and hopes of immigrants to the Kazakh steppes
ALASH IDEA IS THE PROTECTION OF KAZAKH STATEHOOD
A tireless explorer of the Kazakh land
SWITCHING TO THE LATIN ALPHABET – UNITE ALL KAZAKH PEOPLE
Kunaev Dinmukhamed Akhmedovich
People who eat horses will kill you
Materials on theme
Judaism history in Kazakhstan
Abay’s "Book of Words" as a manifestation of consciousness of Kazakh spiritual culture
In the spirit of Astana
Muslim world in 21st century: Central Asian region