Home E-resources Without the past there is no future 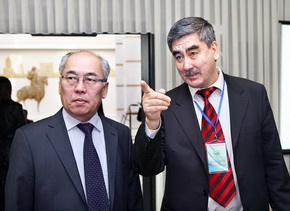 Scientific works are devoted to the twentieth anniversary of independence of the republic and intended for politicians, scientists

Use of materials for publication, commercial use, or distribution requires written or oral permission from the Board of Editors or the author. Hyperlink to Qazaqstan tarihy portal is necessary. All rights reserved by the Law RK “On author’s rights and related rights”. To request authorization email to mail@e-history.kz or call to (7172) 79 82 06 (ext.111)
Қазақша Русский English
MOST READ
Month Year
How had the World War II been started?
Armenians and their kinship with the Kazakh people Today is Kazakhstan Police Day Doctors-comrades-in-arms of A. Bukeyhanov Karaganda coal and the merchant Ushakov The great son of the great steppe Kassym-Jomart Tokayev sent a telegram to UN Secretary General António Guterres Living for the Kyrgyz account Kazakh dissidents: Amangali Kenzheakhmetuly, known as the “Gang” The excavation works in the town of Syganak A death of Ulugbek History of pandemic in Central Asia How had the World War II been started?

Materials on theme
On the preparation of the international project "Famine in the USSR: 1929 - 1934 years"
Kazakh and Kyrgyz intelligentsia against of Bolshevization of the country
Contribution of Kazakhstan to world strengthening
Famine in USSR: Methods of study of study large archival document collections and its interpretation problems.