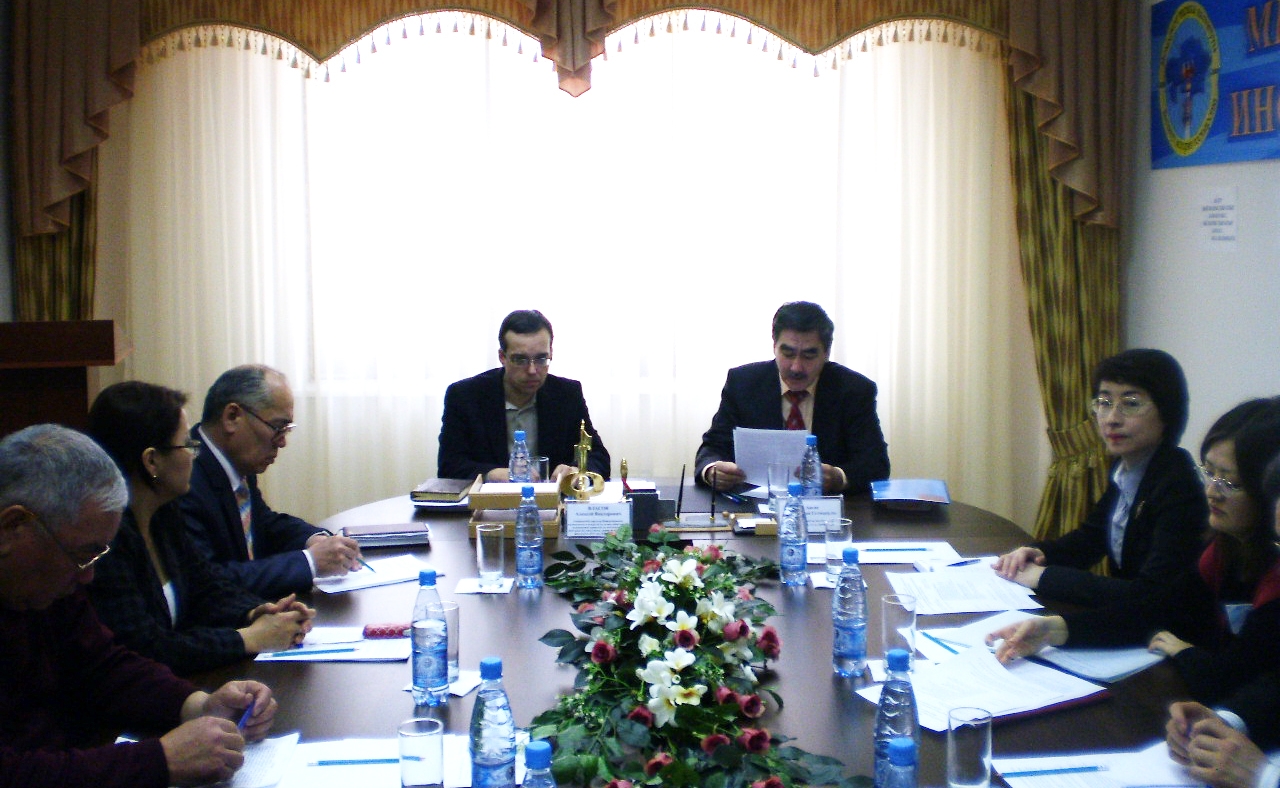 The staff of Institute of history of the state of MOH PK strengthens scientific and business contacts with foreign colleagues.

The staff of Institute of history of the state of MOH PK strengthens scientific and business contacts with foreign colleagues. At Institute "the round table" on a subject "Kazakhstan and Russia took place: priorities and prospects of interaction of scientific and expert community". Research associates of Institute met the director general of Information and analysis center on studying of political processes on the former Soviet Union at the Moscow state university of M of Lomonosov (IATs), the assistant manager chair of history of neighboring countries Alexey Vlasov.

The director of Institute, the doctor of historical sciences, professor Burkitbay Ayagan told to the guest about activity and Institute tasks, having emphasized that special significance is attached to expansion of communications with world scientific community.

A.Vlasov acquainted colleagues with IATs work, having noted thus that one of the purposes of its visit to Astana – establishment of partnership between historians of the Moscow State University and Institute of history of the state. The circle of subjects for scientific work is rather wide and various. Among proposals of the Moscow scientist – the organization of joint conferences, release of scientific editions, implementation of other interesting projects.

During a meeting detailed, interesting dialogue of professionals took place. In the center of attention there were evraziystvo questions, integration processes in CIS countries, a political situation in Central Asia and in the Caucasus. The subject of world crisis and its lessons, problems of illumination of life of Kazakhstan in the Russian mass media and some other, interesting Kazakhstan and Russian historians aren't ignored.

Use of materials for publication, commercial use, or distribution requires written or oral permission from the Board of Editors or the author. Hyperlink to Qazaqstan tarihy portal is necessary. All rights reserved by the Law RK “On author’s rights and related rights”. To request authorization email to mail@e-history.kz or call to (7172) 79 82 06 (ext.111)
Қазақша Русский English
MOST READ
Month Year
Recorded history of Kazakhstan. Part 2
Heroic mothers of the great steppe
How had the World War II been started?
Philosophy of the Emblem
14 monuments at Tekturmas
The rural akims: the country's hope is in the elections
Kazakh historical drama Tomiris premiered in Istanbul
Stolypin about the worries and hopes of immigrants to the Kazakh steppes
ALASH IDEA IS THE PROTECTION OF KAZAKH STATEHOOD
A tireless explorer of the Kazakh land
SWITCHING TO THE LATIN ALPHABET – UNITE ALL KAZAKH PEOPLE
Kunaev Dinmukhamed Akhmedovich
People who eat horses will kill you
Materials on theme
Fate of the elite of the Kazakh society in terms of colonial policy of the Russian Empire in the 21st century
Agreement on scientific cooperation
Contribution of Kazakhstan to world strengthening
Kazakh famine according to west historiography